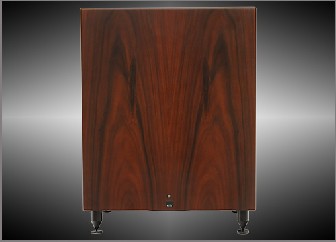 Mention the word “subwoofer” to adults and immediately the conversation turns into an attack on the youth of today and their booming car stereos. Despite that scourge (ok, I’m showing my age a bit), subwoofers have become a rather intrical part of many audio-only rigs, especially with fans of classical recordings. I, myself, have been late in appreciating their value as I held onto the bias of deep bass being boomy.

Late last year when the Era Design 5’s arrived, I was surprised to see the Sub 8 subwoofer box at the front door, as I had not expected it. David Solomon had taken it upon himself to make sure I would experience the full effect of Era speaker capability. Like their brethren, the Design 4 & 5’s, the finish quality of the Sub 8 is outstanding, with its wrap of rosewood veneer. The slightly muted semigloss finish is even more handsome on larger pieces such as the Sub 8.

Like all Era speakers the Sub 8 is constructed of 1” thick MDF with bracing points. The sides have been sanded so that no sharp edges are able to inflict damage on living organisms or associated items. The back panel holds the “control panel”. Unlike many subwoofers, the Sub 8 doesn’t include speaker jacks; instead it uses RCA input/output connections. This may confuse some buyers initially, but it makes perfect sense. Most higher quality affordable preamps or integrated units have either a subwoofer out or 2 sets of line-outs, one of which can be used for the subwoofer. Below the jacks are three toggle switches: Low Pass on/off, Phase (0 or 180), and finally the EQ on/ off. Continuing downward is the Low Pass dial, which can be selected from 120hz down to 30hz. Then comes the Output Level dial. 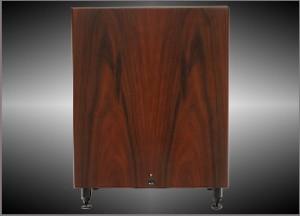 Finally, is a switch for the ground, either normal or lift. Next to the left is the Auto Power on/off switch, power cord input, voltage select, and the fuse cover. In reality 70% of the panel is the heat sink for the 300watt amplifier.

The bottom consists of an 8-inch woofer with a huge rubber surround ring. The surprise is the horn-shaped port. I’ve never seen such a design for a subwoofer before. There are four pre-drilled holes for the rather tall rubber feet. Be careful not to be too casual in screwing in the Phillips head screws, as stripping of the hole is possible.

As with any subwoofer, experimentation and patience is key. One listening session dedicated to placement isn’t enough in my humble opinion. It took the better part of three sessions to find the most appropriate placement and control panel adjustments to get the desired balance/performance. Since I had the Design 4’s and 5’s still around the house, I tried both sets with the Sub 8. I actually preferred the match of the Design 4’s, as I found it harder to match up the bass response with the 5’s.

First off, the listener must realize that the 300-watt amplifier is very powerful and that the volume should be set quite low to start. Otherwise, the Sub 8 will overwhelm the speakers and lead to a miscalculation of settings. With my desired settings in place I began by playing James Taylor’s Up From Your Love. This song was the one that managed to make the Design 5’s blink with its deep bass that increases as the song wears on. The Sub 8 with its extra headroom had no such problem in keeping the upper hand. Especially considering that the song use every bit of the frequency range of the subwoofer. I ran this track several times during the review process in both my living room, and later in a spare bedroom. The living room with its larger, more open space allowed for a more pleasant sound. It also allowed the sub to play louder without overwhelming the rest of frequencies. 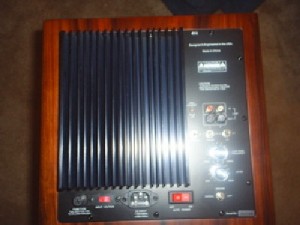 Looking for a lengthy challenge, I selected Donald Fagan’s Morph the Cat, with it prodigious content of bass cello, drum, guitar, and organ. Being a perfectionist, Fagan demands a clean sound from his recordings even at the lowest of frequencies. The Era Sub 8 reproduced these frequencies with fine clarity, especially in multiple instrument combinations.

To test the effects of a floor surface other than carpet, I secured a piece of 18” tile and placed it on top of my linoleum entryway, which is a part of my living room. The difference was revealing; the bass became tighter and more defined. Since this area is quite small, the echo effect was limited. Not being a fan of heavy bass, I enjoyed this setup. I did try the tile on top of the carpet. The difference wasn’t as great, but still noticeable enough that this modified setup may find a happy middle ground with some owners.

I would be remiss without giving the Sub 8 my favorite current bass track to test equipment, James Taylor’s Gaia with it rumbling thunderclap effect. It was a treat to see how loud I could play that section before the Sub 8 became too much. Just to add to the fun, I did this during a fairly heavy rainstorm. The result was stunning to say the least.

I did try the Sub 8 with the Design 5’s, but I found myself tinkering with the settings too much. I blame that on myself, as I was being ridiculously curious that day (the wife was shopping), and looking back all that movement back and forth biased me a bit at the time.

The Sub 8 does have a few limitations, small rooms and higher gain settings leaves the woofer a bit too rumbly for my tastes. I wouldn’t place it in a space smaller than 10’ x 10’ feet, it’s just too powerful. On the other hand, in my medium size living room, it’s a fine match, especially when given some breathing space. Just remember to start with output dial quite low.

Kudos to David Solomon and Jim Spainhour, for recognizing that the entry-level subwoofer market wasn’t for them. Instead, they concentrated on putting out a quality-sounding box that could honestly recreate the lower spectrum. The ability to reproduce sonics that are both true and defined that distinguishes between different instruments when listened to in combination with the Design 4 satellites was quite impressive. Just bring along some music that has true bass dynamics and multiple notes and frequencies to appreciate what the Sub 8 can do. The Sub 8 is a refined piece of sound reproduction and a welcome addition to Era’s growing lineup of speakers. 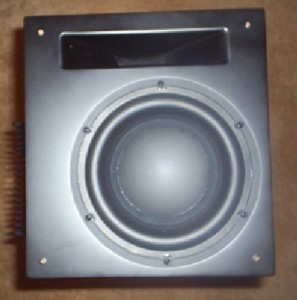