The 1980s were an interesting time in audio. The integrated chip, for better or worse, became the standard piece on the motherboard. To some, this was the point at which audio began what they believe was the death spiral. To others, the IC allowed the industry to try new things. One area in which many saw potential was the area of sound shaping. Up to this time, audio fans were pretty much limited to the “advanced” controls of the equalizer. A new term sprung up, sonic holography, the idea that two speakers could, in fact, create a three-dimensional sound spot somewhere in front of the speakers. A couple of approaches to this concept sprung forth. Matthew Polk believed that using actual signals from the speakers to cancel out crosstalk was the way to go. He brought his ideas to life in his SDA speaker series.

The other approach came from Bob Carver, who believed that the IC could be programmed to eliminate crosstalk thru signal alteration. Wikipedia.com explains it thus, for better or worse:

The goal of sonic holography is to remove distortions in pitch caused by the doppler effect while recording and playing back audio on a sound system. While an audio source is recorded by a microphone, the membrane that picks up sound vibrations moves towards and away from the source. This results in a doppler shift that is preserved in the recording. When that recording is played through a speaker, the cone vibrates back and forth in order to move air particles and create sound. This introduces a second doppler shift, especially when the same cone is producing multiple frequencies at the same time. Both instances of doppler distortion degrade the overall quality of the output. Sonic holography attempts to remove these distortions using a proprietary filter designed by Bob Carver.

Playing around with the signal in this fashion infuriated the audio purists of the day. The younger audio crowd (including myself) had a more open mind about the process. In the 1980s, I looked at the end result rather than the journey of an audio signal. With that statement in mind, during a long winter in Cheyenne, Wyoming, I managed to acquire a C9. It was my way of having SDA technology while keeping my Polk Monitor 10’s. In thinking back twenty-one years, I remember that not every album or cd sounded better. But the C9 did change the sound. With not a lot else to do in Cheyenne after work on weeknights, I quickly went thru my music collection and memorized which albums to engage the sonic holography. Typical of Cheyenne, it was a long and windy winter and I had experimented with the c9 quite a bit. By the summer of 1987, I had tired of engaging/disengaging the C9, and used it as partial payment for a Conrad Johnson PV7 preamp. 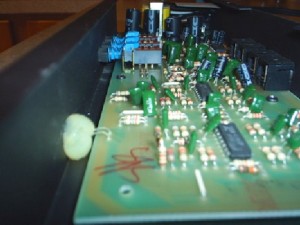 This past fall, I was e-mailing with a reader, and he mentioned the C9 and that it would be a good review piece. With that suggestion in mind, I began watching eBay and Craigslist. Last month my vigilance paid off. I spotted a Carver C9 on eBay on a Buy It Now auction for just $55 plus shipping. Even better, it came from just 100 miles away. The seller was kind enough to knock shipping down to only $8. Figuring I could resell it for the same price, I bought it without hesitation. 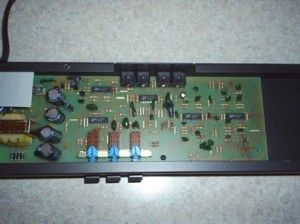 The Carver C9 is a wide, low-profile unit with a short depth. Its dimensions and light weight make it a bit awkward for those who employ heavy RCA interconnects, as in certain setups it can actually tip the front side of the C9 upwards. This shouldn’t give the impression that the C9 is flimsy. In reality, the steel gauge is quite substantial, with very little flex once the top is removed.

The front panel has just three buttons: Injection Ratio (normal or theoretical), Listening Aperture (narrow or wide), and Sonic Hologram (bypass or engage). To the right of center, is a small red power LED. The backside consists of two pairs of RCA jacks, one pair each for input and output. On the far left is a power cord and a switched outlet.

I placed the Carver C9 between my Jolida cdp and the integrated amplifier (either the Underwood modified PS Audio Trio C100 or Onix SP3). What little Internet information was available did remind me that for the C9 to work best, the speakers need to be only 6 feet apart, with a slight toe-in, and well away from any walls. I started my demo cd with all three buttons in the out position. About thirty seconds into the initial track I engaged the sonic hologram. The difference was obvious, the music came from a wider point, but also I heard the faint sonics of music coming from a well. I pulled the speakers out another 6-8 inches from the back wall. I also went and grabbed a dining room chair which placed me about 3 feet closer to the speakers. That helped a little, but I was still frustrated.

Remembering that not all music sounded great with the C9 in Cheyenne, I dug deep into my collection and pulled out The Who, Who’s Next, and proceeded to play “Baba O’Reilly.” Bingo! The sonic holography appeared. A thirtyfive-year-old recording had a new life. Playing it a second time through, I set the aperture to “wide.” Big mistake, the sound became almost warped, for lack of better wording. I quickly went back to “narrow” and sonic bliss returned.

Hoping for a better result, I next tried changing the Injection Ratio, from Normal to Theoretical. The sound became rather similar to a distant echo. Once again, I returned that switch to its original position. At least I now knew the sonic limits, based on my room environment and equipment.

I played a wide variety of music, and after several days a pattern emerged. Older rock music was by far the most enjoyable. Light rock was very hit and miss, to the point that different tracks on recordings were either pleasant or plain awful. Classical was the most disappointing: only two passages from a sampler disc were worth listening to.

It was a great deal of fun stepping back the twenty plus years to relive my audio youth. The Carver C9 is a fun piece of equipment, but a frustrating one as well–not because of its own shortcomings, but because it is so dependent on the source material. Therefore, if you’re a fan of classic hard and arena rock from the 1970’s, the C9 may just be an enjoyable addition to your system.