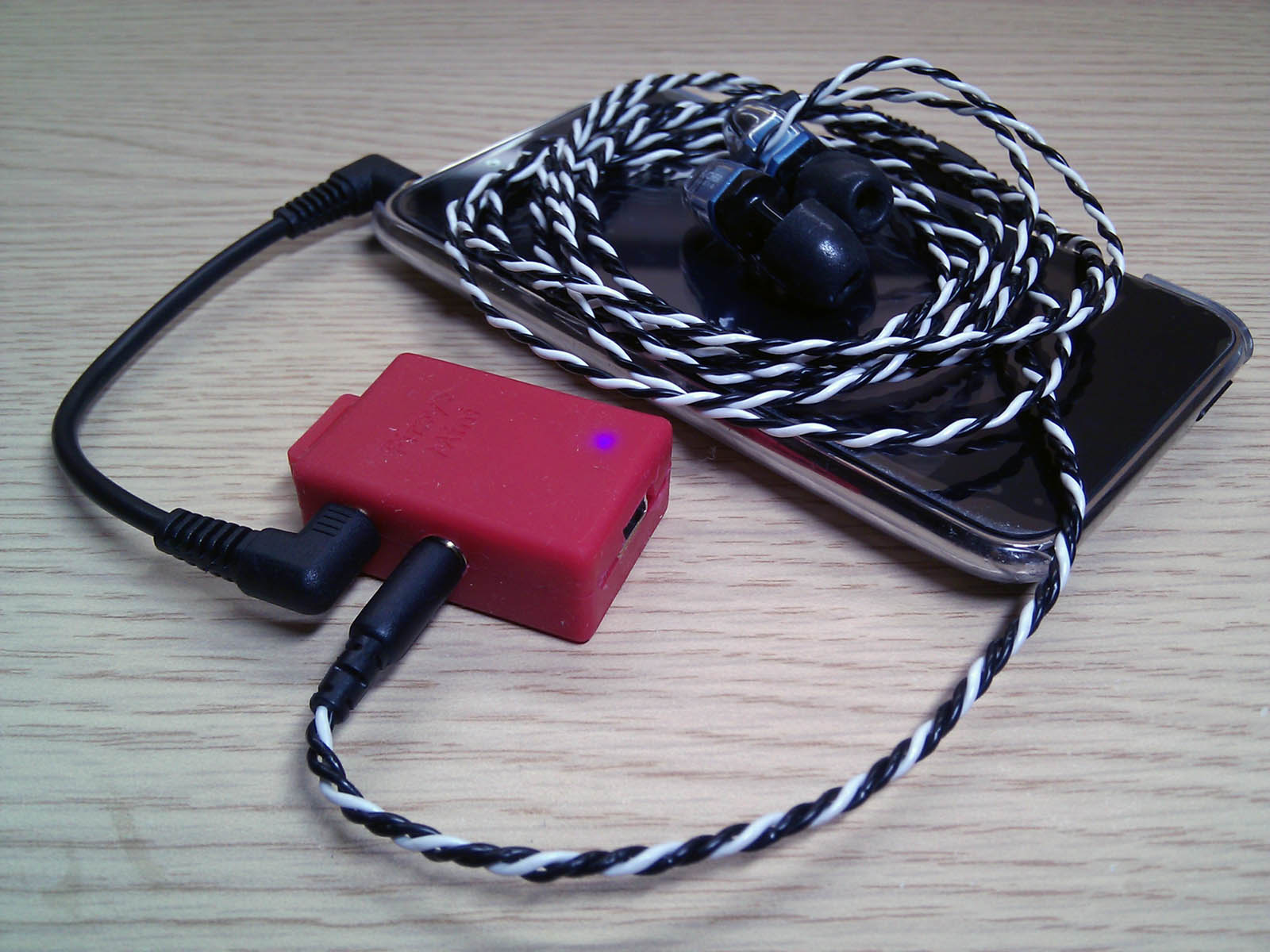 Portable music players and smart phones have allowed us carry our favorite digital music files on the go. For example, I love my iPhone loaded with all my favorite Apple lossless audio files. It is easy, convenient, and takes up far less room than my old Walkman with tapes. However, being the pursuer of high-fidelity audio reproduction that I am, I knew that I wanted a little more out of my on-the-go sound quality. There are a few “audiophile grade” digital players on the market that can playback FLAC files, have custom internal DACs, as well as higher driving voltages than your average player or phone. These devices however tend to be expensive, as well as you still have to carry around your phone and your music player; not convenient. But improving the sound quality of an iPhone or digital music player could be as easy as a battery powered, in-line headphone amplifier. Having many choices available to the consumer on the market, I wondered where to begin until an email showed up in my inbox from Firestone Audio of Taiwan with their newest offering.

Firestone Audio specializes in headphone and desktop stereo equipment, and I had the pleasure over the last few years to be able to listen to a few of their headphone amplifier. They have historically created solid products for the money, but I was interested in their Fireye line of portable headphones amplifiers, and how it would hold up to their reputation. Firestone has long offered a line of headphone amps named the Fireye that offer different features such as battery power, USB DAC, and volume control. Firestone Audio offers a series of headphone amplifiers in their Fireye line offering a wide array of features such as battery power, USB DAC, and on board volume control. This new amplifier however offers only one of those features; a 1/8″ signal in and out on the same side of the amplifier. The amplifier itself also has a mini-USB connection, but that is only used to recharge the Lithium-Ion battery snugged against the circuit board inside the silicone case. Being that the amp is only 1.5” x 7/8” x 0.5”, it disappeared into my pocket if I was walking around, and fit snuggly into my headphone case for easy travel.

I’ve been auditioning the Fireye Mini off and on for the last few months now, and I now always listen to my iPhone with it in the headphone chain. It does not provide a major difference, but it does provide an improvement in sound-stage depth, stereo separation, and dynamics. It is a very subtle effect, but the best way to describe the sound of the amplifier is whatever you were listening to, just a little better. Naturally because it is an amplifier, it also makes the sound a little louder, which will amplify the music you are listening to, as well as any noise from your source. Of course, there is no way to avoid this issue, but luckily my iPhone provided a very quiet source that made for a very enjoyable listening experience with lossless audio files. Playing through a few albums, starting with Adele’s 21, the Mini was able to slightly improve the dynamics of her band, while not adding edge to her cutting vocals.  The amplifier also added a little more texture to her voice which added to the realism and spacing of instruments. The second album was A Cappella Gershiwn by Glad which features four vocalists singing jazz classics. My Klipsch X10is with the Fireye Mini presented the group with good space and air, and with full body to their voices. The X10is already aurally do most things right, but the Mini did bump up the sound quality noticeably.
For a second opinion, I let my brother borrow the Fireye Mini over a vacation, and his comment on the amp was, “Wow, this little thing makes a difference!” Naturally he was skeptical in thinking that a USB jump-drive size device would improve his headphone listening experience, but like I did when I first plugged it in, he used it for the rest of his listening session. When he was done, I popped in his Apple Ear Buds powered by his iPhone to see how they compared to my X10i In Ear Monitors. Both headphones were improved to the same degree by the Fireye Mini, both increased slightly in volume and dynamics. By this point I was convinced, good amplifiers can come in [mini] packages.

The bottom line with the Fireye Mini from Firestone Audio is it provides a little extra oomph, depth, and stereo separation for your headphones as you travel. There are better amplifiers that provide better sound quality, but not for the size and the ease of use; I am not actually sure there is any headphone amp that is the same size. I like this little amp for traveling because it actually fits into the leather travel case alongside my little Klipsch X10i in-ear monitors. All an audiophile can ask of a piece of equipment is for it to make their music sound better, and for $39, the Firestone Audio Fireye Mini does exactly that for far less than anything else I have found.