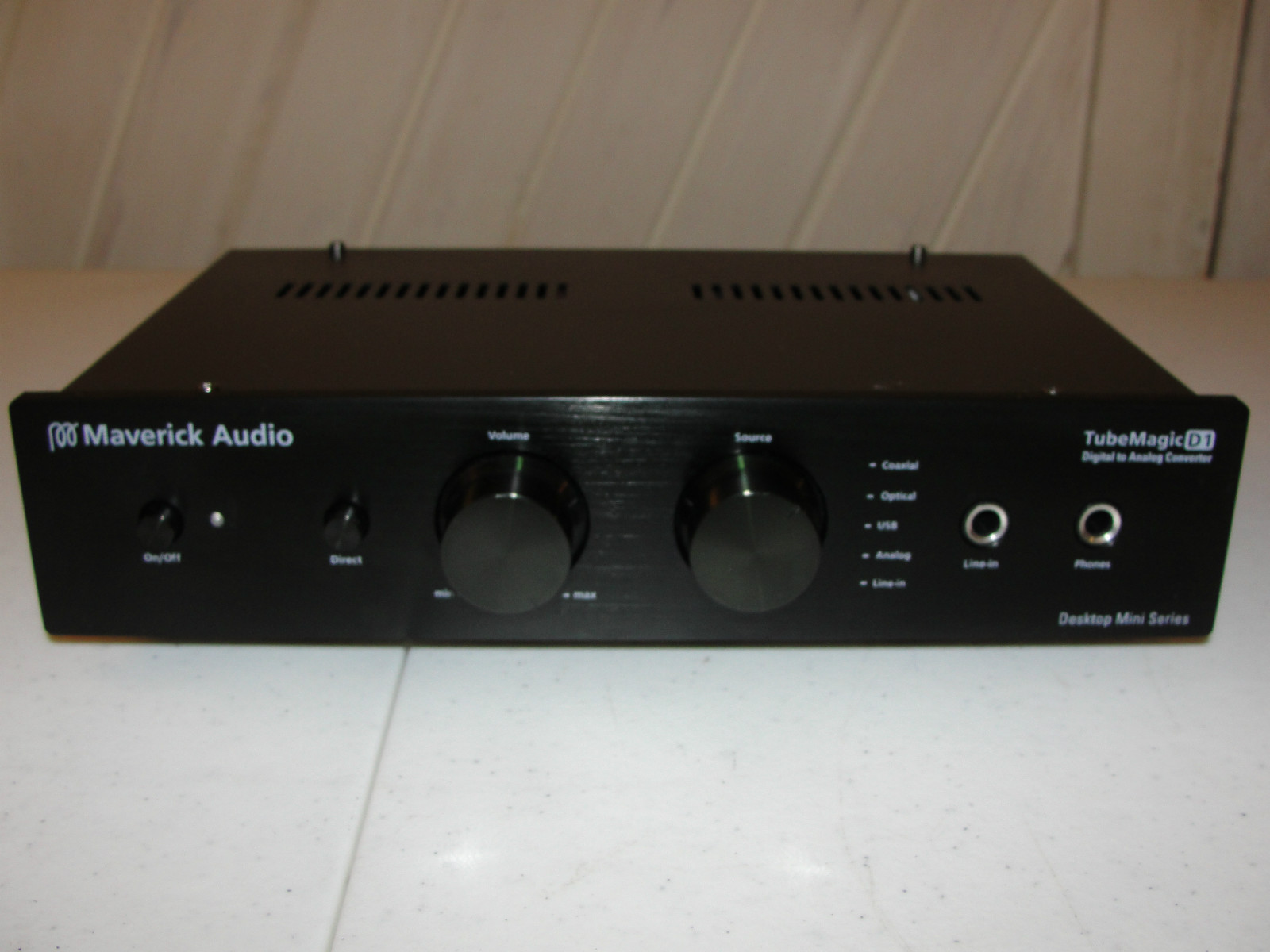 When it comes to music, whether live or recorded, I’m best (self-)described as an aesthete… an aficionado… or up to and including an avaricious glutton. Looking at my insatiable appetite in another context, one might recall Edgar Allen Poe’s famous line, “Quoth the Maven, ‘Evermore!’” So what’s this little bit of literary folderol got to do with a DAC review, you ask? Fair question. It’s simply my un-simple way of announcing I approach equipment reviews based solely on their interaction with, and impact on, music—I’m not an engineer. Technical information is always available on the manufacturers’ websites… in this case, www.mav-audio.com.

Before I relate to you how the Maverick Audio TubeMagic D1 (the “D1”) sounds with Affordable$$Audio The E-zine For Frugal Audio Enthusiasts some of my favorite music, let me cover some basics…

Sporting the moniker, “Desktop Mini Series,” the D1 is indeed compact, but feels relatively substantial with its solid .25” milled-aluminum fascia. The knobs and buttons are as they should be on gear at this price point—sturdy plastic—but nice looking and acceptably solid-feeling in use. One improvement I’d like to see is white markings on the Volume & Source knobs; you can barely make out the blackon-black notches, even from right on top of them. Minor nitpick aside, the faceplate is well-labeled and not lacking any function. The volume control offers 30 detents between “min” and “max” and provided acceptable (linear) degrees of change. I will admit, I didn’t understand the reasoning of a ¼” line-in socket on front*, since most ancillary devices use 3.5mm output jacks—though an adaptor is conveniently provided. Around back, you’ll find the standard array of inputs/outputs, with the one exception of the inclusion of both solid-state (“Normal)” and tube pre outs… a nice-to-have feature. Overall, I’d call this is a handsome piece of kit—and with more functions one can account for on much pricier gear.

[*I solicited email clarification from Ryan at Maverick… their decision to use a .25” jack was because they couldn’t source a 3.5mm jack that was as “robust” as the former. Sound reasoning for reliability’s sake, I’d say. Let me interject that Ryan responded quickly, cheerfully & professionally to the several questions I posed in an email. Further, I surreptitiously wrote from my personal email address as just another customer—he didn’t know I was conducting a review. A good sign of topnotch customer service in my book… touché, Ryan. This is obviously a vital component of an internet-direct enterprise where you can’t walk into a brick-andmortar store for assistance.]
As an audiophilogynist* I find acquiring any new gear is like getting a new girlfriend… lots of exploration and discovering hidden talents, spending gobs of funtime together, trying out new accessories, rolling (tubes) around under the cover, learning when to push what buttons, and even the simple task of finding out which is the best position in the rack. Needless to say, I thoroughly enjoy myself with each “new-gear” opportunity. Such was getting to know the D1 (you knew I had to eventually get to this point, right?!?)…
[ *Audiophi-le + Phi-logynist (lover of women) = Audiophilogynist ] 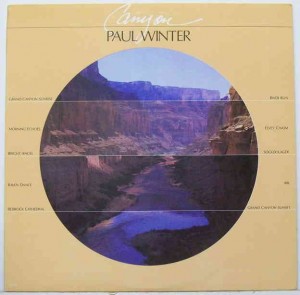 I began my exploration of the D1 in its capacity as a headphone amp, with USB-fed FLACs from my PC to my venerable Sennheiser HD700s. I started this session with one of my gotta-use-with-every-system-Iever-listen-to tracks, “Grand Canyon Sunrise,” from Paul Winter’s Canyon (1986, Living Music) album. This track opens the album and is the first of five tracks recorded in The Cathedral of St. John The Devine at 112th Street and Amsterdam Avenue in New York. The balance of the album was recorded at various “stops” along the Consort’s river expedition thru the Grand Canyon. The sense of immense space in the cathedral is very clearly prominent in good playback systems—headphones included—and the D1 enabled Paul Halley’s large organ to “swallow” your head. Paul Winter’s ethereal soprano sax emanated from the back of the soundstage and, again, the D1 captured his location and projected it right at the back of yer noggin. Well done.

Switching to the D1’s preamp/USB-DAC function, I fed the same track to my NuForce Stereo 8.5 V2 amplifier and AV123 X-SLS two-way floorstanding speakers… the Maverick acquitted itself with excellent soundstage depth and breadth. I’m accustomed to the grip the NuForce exhibits on the lower frequencies of this piece, and the Maverick didn’t yield any margin of omission—admittedly I expected some loss of resolution of the organ’s, well… organic resonance & breadth, but no such oversight occurred.
Excellent! 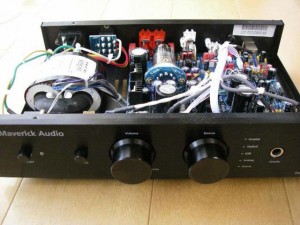 Then, in a comparison effort, I cued up Canyon disc on my doggedly long-in-thetooth Adcom GCD-600, connected to the D1’s coax input, and switched back & forth between inputs. The CD sounded slightly more open & airy than the FLAC, but only by a gnat’s eyelash… in both, Winter’s horn came from both right- & left-rear stage behind Glen Velez who’s clearly in front of everyone. Velez plays the bendir (a frame drum, played by tapping with fingers) which buzzes… it’s simply the loose snaresunderneath the head. The liner notes alert the listener to accept it as the drum’s normal sound. Meanwhile, I did notice a difference in gain, with the slightly higher SPL coming from the digital input. [Though unrelated, it was at this juncture that I happened to—poof!—lose the right-channel signal. Taking a page outta “Troubleshooting 01100101,” I quickly identified the 5670W tube to be kaput; the replacement arrived in three days and all was well in Denmark again.]

In addition to generic ‘acoustic wallpaper’ listening over the intervening months, I also played every “demo” track I have, scores of times (pun not intended). My eclectic genre list of artists spanned virtually everything… well, except for Rap and Opera. ‘Never developed a taste for either of those species. Mean-while, in the heavily-repeated rotation list (including Canyon), I wore out my left-side neighbors with… 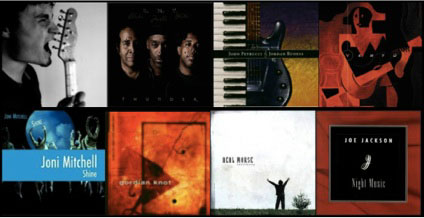 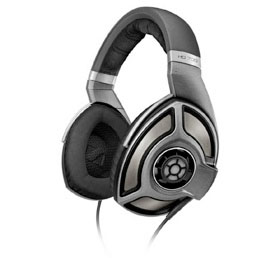 Back under my HD700s, the FLACs of John Petrucci & Joni Mitchell highlight just how good lossless formats can sound. Joni’s pièce de résistance, the disc’s instrumental opener, “One Week Last Summer,” is so tonally and compositionally arresting, I always follow with an immediate encore. Joni makes the point she’d been away from the piano for ten years before sitting down to compose this album… you’d never suspect it. The alto saxophone that accompanies Joni’s piano is preternaturally emotive… you can feel the gracefulness. The song/album is replete with “musicians” she crafted on synthesizer. “‘Coulda sworn I heard a real oboe in there…” This song tops my all-time list of her massive catalog of masterpieces. For the first time since it’s release in 1974, I can say she’s bettered Court and Spark!
If you’re a JM fan & haven’t heard Shine, do so… soon!

Meanwhile, Petrucci & Rudess flex their melodic chops on “State of Grace,” settling into an endearing sentimentality— it’s a heart bender. John’s oh-so-deft picking layered on Jordan’s complementary piano work renders this wellrecorded live piece simply stunning. The piano sounds h-u-ge… almost too big to fit in my room! By the way, this is one of the best live recordings I’ve ever heard… and you forget that it is (live) ‘til the audience begins clapping.

Being a glutton for deep, nasty ‘ol bass, I always include SMV, Vertu & Gordian Knot in the demo fray—disparate styles to be sure—but all feral & visceral… and fun! Only in Gordian’s Knot’s “Arsis,” did the LF waters homogenize a bit, but that’s to be expected from a mid-fi contender like the Maverick (Did I mention it retails for $199?!?) with a subterranean low-bass track like this.

The Maverick D1 acquitted itself nicely with the variety of genres I threw at it; again, however, I felt more of the detail and depth cues from the CDs themselves. It wasn’t that the sound was curtailed to any degree; just that the original recording evinced the layers of instrumentation better. No slam to the Maverick, but the compressed PC files occasionally lost some of the depth & density of the original discs, but I attribute that slight to the files themselves—the D1’s performance as a headphone amp excelled. (“Buy a headphone amp for $199; get an analog/tube linestage, DAC and USB/DAC for free!”) In Matthieu’s 320kbps downloaded “You,” his overdubbed acoustic guitar (he plays all instruments) manages to stand proud against the other instruments in a way that makes it sound (here comes that tired expression…) as though he’s playing in your room—the individually-discernible, realistic steel-wound string acoustic tones are to die for. This from an 18-year old youngster no less! His tight, funky bass lines & shredding moments are also impressively blistertastic! This kid’s damn good… as his French countrymen déjà savoir.

Where the D1 did hold its own with aplomb was in the vocal reproductions of Neal Morse & Joe Jackson. The warmth (sans any syrup) and articulation in both these tracks was spot on, as clean as I’ve heard them; the FLACs rivaling the “real thing” from the respective discs… in fact, I rerouted the cabling to the coax lead from my CD player to compare the D1’s DAC output to the compressed files. In these cases I couldn’t tell the difference. Further, in Jackson’s “Ever After,” the rambunctious snare & toms exhibit such striking realism & presence; it’s as if you can reach out and strum the snares. As a former drummer, I did get my jollies replaying that segment several times! 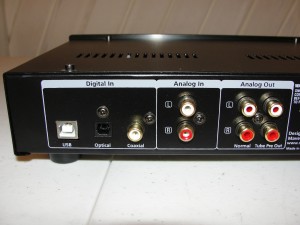 One feature I was anxious to try was auditioning a 24bit/96kHz file (“Isa Lei,” from Ry Cooder’s A Meeting By The River) I downloaded from HDTracks. Unfortunately, however, I learned these hi-rez tracks are only accessible through the D1’s optical or coaxial inputs, and my soundcard sported neither type of output. In that single case, I was snakebit… disappointed that they’re not made available thru USB. A minor nit in the scope of all the Maverick’s attributes, but a bummer in my case. 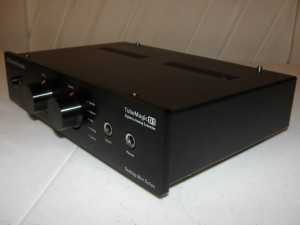 Nonetheless, the Maverick Tube Magic D1 “weighs in” at more than its four pounds and $199 MSRP would lead one to expect. Perfect performance? No, but that’s not its raison d’être… much-better-than-good value for its flexibility and performance though render it a very worthy recommendation. Particularly for the sum of its parts—a fine headphone amp, excellent DAC & USB/DAC, versatile multi-input solidstate preamp, while also a tube roller, all of which individually better the asking price. I’m definitely impressed at what you get for your two C-notes. Not having heard the A1, I would imagine they make a synergistic small system— 20WPC paired for a measly $398! I can see this more-than competent, handsome desktop system coupled with any number of moderately efficient speakers—as a more than respectable start at introducing the uninitiated into our world of higherfi. Certainly one benefit of this tandem is its classy good looks… proving, if nothing else, a “starter system” can sport a little panache! All in all, an unreserved, hearty endorsement for the Maverick Tube Magic D1 from this value-conscious audiophilogynist!

from aﬀordableaudio, By Fred Sartin