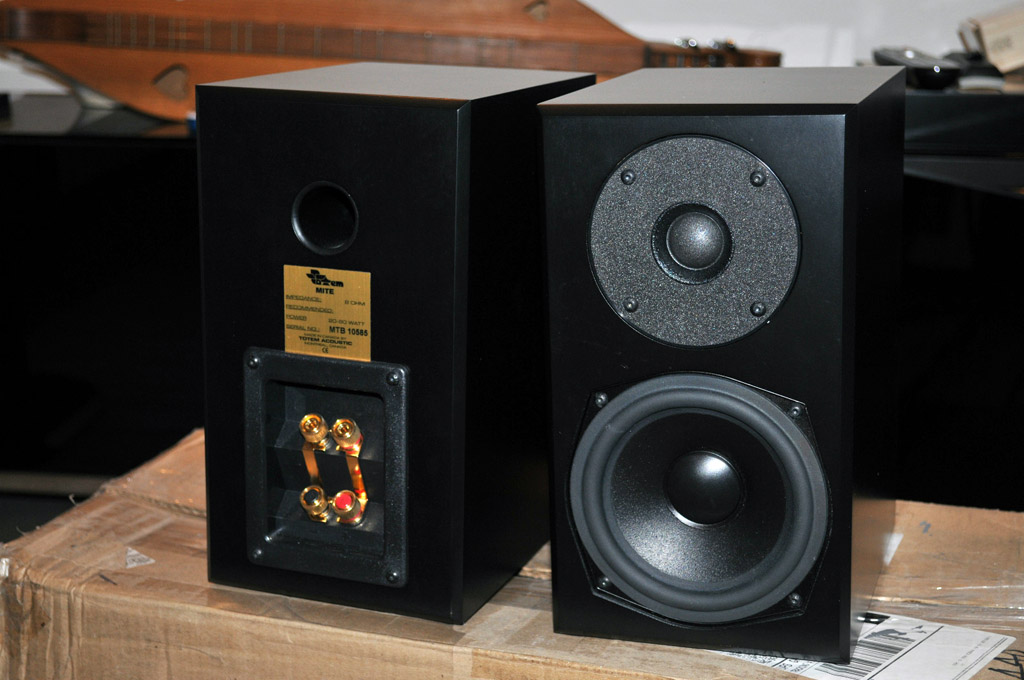 I confess, I have an affinity for small monitors. Maybe it’s due to the years spend lugging first, Infinity RSa’s, then Polk Audio 10B’s back and forth to college. Or, maybe, it’s the 15 years I spent appreciating silky, subtle sound of the Celestion SL6si’s. Whatever the case maybe, to me there is nothing more pleasurable in discovering great audio coming from diminutive boxes. About six months ago, I had the pleasure of finally hearing a pair of the original ProAc Tablettes. I was impressed by how nicely they filled the 20-foot ceiling at Echo Audio in Portland with classical jazz. Its one limitation was that original model didn’t produce any bass below 60hz. Knowing that small monitors have only improved in the past 20 years I began my quest for the best small monitor as far under $1000 new as possible.

Several audio publications have reviewed some of the newest models, but I decided that many other companies have offered for several years the same model because it hit the desired sound reproduction. Those speakers, being “mature” have fallen off the radar, in this day and age of “newer is better”. One such model is the MITES, by Totem Acoustic. The MITES have been on the market for over ten years now. Originally, they were Totem’s entry speaker, since the Model 1’s ran nearly a thousand dollars more. Since then, Totem has brought out the Dreamcatchers , and most recently, the Rainmakers to fill out the under $1000 lineup. The MITES, being the oldest of this group naturally became the “oh yea” model. Seeing an opportunity to reawaken audio fans, I contacted Nico Bruzzese of Totem. Being the affable soul, he offered to send out a pair for review in any finish I desired. Since I have the Dreamcatchers in Mahogany, I suggested the cherry veneer. Nico happily complied, and a few weeks later they arrived. All Totem speakers have approximately 30 hours of break-in before shipping. For the next two weeks I let them play at moderate volume in my classroom overnight and all weekend. By the time I brought them home, they had over 150 hours of play. 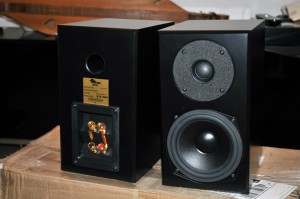 The MITES are an impressively small cabinet, measuring just 11” tall by 6” wide by 8.5” deep, and tip the scales at just nine pounds. Only real veneer is used on top of MDF inside and out, with both the front and back corners beveled. The veneer in the review pair came in a beautiful quarter cut (almost burl). The finish was originally a bit orange/red, but it quickly grew on me, and it is now my favorite stained piece of wood in our home. The driver is a 5 ½” granulated cone that is inset into the front of the cabinet. This is different from other Totem models where a plastic cap covers the metal rim. The tweeter is also reset into the front face. Simple, rectangular grills are optional and attach with Velcro tabs. In deference to my spouse, I attached the grills, during the listening tests however, the grills were removed to allow for optimum listening.

The MITES were placed on metal stands approximately 20” from the back wall, and 30” from the sidewalls, leaving them some nine feet apart, and slightly toed in. Different placements led to little or no appreciable sound difference. Thus, proving that much like the Dreamcatchers, the MITES are quite comfortable in any room placement. Amplification came from an Adcom GFA 535, Adcom GTP 450 preamp, and Toshiba SKR 755 DVD player. The interconnects were original Monster Cable products.

How do MITE sound?

The first impressions I had upon the first play of my demo disk were how effortlessly the MITES played the variety of the music. Part of this may come from the fact that the MITES are an 8-Ohm speaker. Yet, unlike other 8Ohm speakers I have heard, it still carries with it a depth that is normally the exclusive territory of 4-Ohm speakers. This was quite apparent in listening to James Taylor’s September Grass. The light rolling of the bongos resonate with an ambience that enriches the instruments around it. The vocals of Melissa Etheridge, stayed in the upper tenor realm, something most mass production speakers tend to push into the lower echelons. The MITES stay true to her Kansas upbringing showing off her slight nasal intonations from her first album. 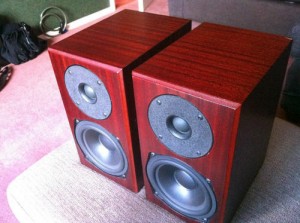 Sound dispersion, always a big issue with me, as I have a tendency to sit in several places in my living room when listening, is excellent. Vince Bruzzese mentions it as one of his goals in his interview. This is laudable, as very few of us actually have lives that allow for perfect seating. Either children, spouse, friends, or furniture interfere with optimum listening. The rising vocals of Phoebe Snow’s chorus in Something Real I found reaches equally to both my center position as well as the couch, which resides along a sidewall.

Imaging (always a tricky issue in my living room) is acceptable at very low volume, blooms when turned up to my true listening level (still very moderate). The rim shots in Cha-Cha Loco by Joe Jackson project up about four feet and slightly in from the left speaker. That delicious sense of elevation when found in a song is one of the great pleasures in audio. The extended drum roll in Steely Dan’s Aja pings back and forth in a sweet salute to the studio genius of everyone involved that classic piece of recording.

What about the bass, you ask? As stated before, I hate boom-boom; thankfully the MITES come with a pleasant deep end thump. Not exhausting or artificial, just plain comfortable. Much like that favorite weekend sweatshirt. When a deep note hit, I felt a quick thump, then just as quickly it left. This demonstrated the rigidity of the cabinet and the ability of the port to expel the lower tonal waves into the room. 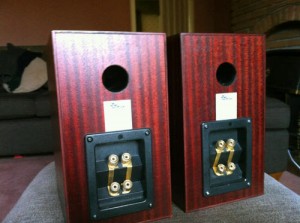 I did try the MITES in my family room bookcase, hooked up to my Harman/Kardon HT receiver. Once again, they were very similar to the Dreamcatchers in the ease of how they handled the enclosed space. The deep base was a bit exaggerated, but not unpleasant by any means. If the Mites were to be placed on a shelf with other items to weigh down the shelf (books, etc.) I believe the bass would tighten nicely. In other words, these would make great bookcase speakers for the office, bedroom, or dorm.

The MITES took on both hard rock of Led Zeppelin and The Who, performing extremely well, considering their diminutive size. They will never thunder like a fine set of towers, but the listener will feel and hear the strength of the music. With classical recordings, the reed instruments stand out in both clarity and soululness. Saxophones and clarinets find center stage on the MITES, then ride the wave to wherever the listener resides.

The one puzzlement with the MITES is that they always needed a song to “stretch” to before they began to really sing. During the review process I had to be conscious of this, as sometimes a specific song would pop into my head to play. I would then have to set up the system to play something else first while I went to another room as I didn’t want the first song to color my impression of the how the choice song sounded.

Overall, the MITES are just plain fun!! From the ease of placement, to the simple good looks, these little speakers flat out perform. Their small footprint belies the big sound they put out. In most cases, the MITES all but disappeared leaving me with the pleasure of trying to locate the spot where a particular instrument placed itself. In the end, isn’t that the goal, to let the music be the soundstage?