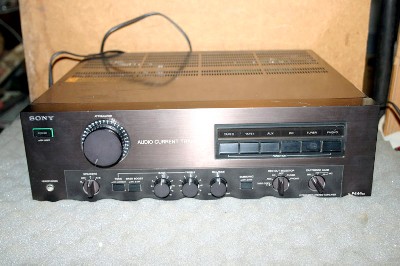 This month we look into the Sony TA-F444ES. The TA-F444ES was the entry level ES series integrated amp in Sony’s initial group of ES products. It is a simple, very high quality 80 WPC unit that sported some very good specifications for the time. Designed to compete with the likes of H/K, Onkyo, and Denon it had to be more than a cut above normal mass-market fair.

Simple and clean design is evident throughout. Signal paths are kept purposefully short to keep the audio signal free from interference and degradation. High quality components, such as Elna for Audio caps are used in addition to Alps switches and potentiometers. And contrary to normal 1980’s design, the front panel and knobs are made of black anodized machined aluminum, not molded plastic. This all added to the cost of an ES piece, but if you were buying ES, cost was not a concern. 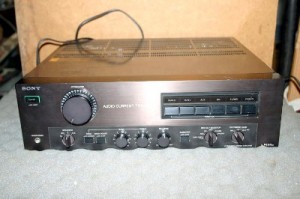 The TA-F444ES featured a technology that would be used in many ES designs called Audio Current Transfer (ACT). In a circuit employing ACT, current, not voltage, is transferred from one stage to another. This effectively added 50% greater channel separation, increased dynamic range, and resulted in overall less signal degradation compared to a conventional voltage transfer system. 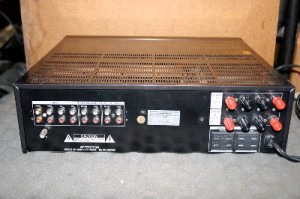 The power supply is well built and features a dual-mono design. Each channel has its own secondary winding on the transformer, as well as rectification and filtering. The filter caps are very generous Elna for Audio 63v/12,000uFd electrolytic caps.

Internally, the power amp is shielded with a copper plated brace that also acts to support the very tall filter caps. Driver stage components and power regulators receive copper-platted heat sinks as well. The output stage is a low-bias class AB complementary design using a single SanKen 2SC2922 and 2SA1216 per channel. The low-bias setting and efficient amplifier allow the TA-F444ES to use a more modestly sized heat sink. 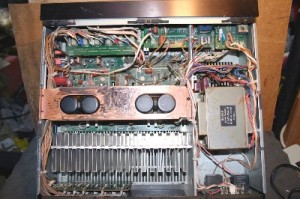 The TA-F444ES is a remarkable amp to listen to. Very clean and extended without being clinical or harsh in the least bit. It has sonic qualities more reminiscent of Harman/ Kardon and Onkyo than of Sony. Imaging is very precise and stable. The noise floor is not quite as low as my Harman/ Kardon PM660, but it is still very low. Its real strengths lie in very delicate instrumental and orchestral work, allowing you to follow a single instrument, any instrument, with ease and clarity. Allowing the TA-F444ES to “open up” with loud rock or pop, the dynamics and accuracy are maintained, but the amp does tend to compress when strained. Power reserves and headroom are very good, but not quite as good as some others. Although the unit is rated as supporting 4-ohm speakers, I would not recommend using very complex or low loads with it. The single pair of output transistors per channel and modestly sized heat sink would likely strain the unit. That said, it handles my JVC zero9 speakers modestly complex loadperfectly well. 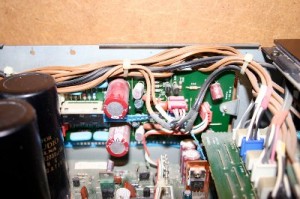 The Sony TA-F444ES is something of a sleeper amp on the used market. Units in good condition fetch $120-$170. I found mine fore the equivalent cost of $25, though it is in less than perfect shape, and required some minor repairs before it could be used. But if you ever wanted to give Sony ES sound a try without a large layout of cash, the TA-F444ES is the perfect introduction. 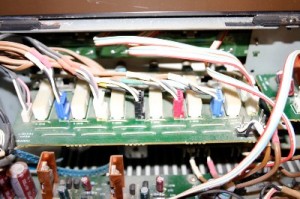