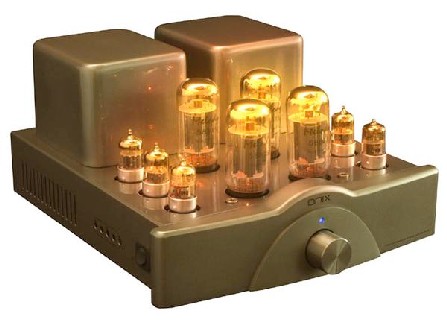 If you think audiophiles are boring just yell out “tubes are dead” and watch the energy bow the windows. It’s one of the most passionate discussions outside of speaker wires in the stereo world. I first became a believer in tube sound in 1987 when I picked up a used Conrad Johnson PV-7 preamp. To this day I kick myself every time I think that I was ignorant enough to trade it in. During this past summer my yearning for a tubular reunion came to a head. Knowing that integrated tube amplifiers were the easiest solution and fit in well with this e-zine’s mantra of affordability, I went onto audiokarma.org and began checking into the various possibilities. After a few days of reading, I contacted the good people at AV123 and inquired as to reviewing the Onix SP3. Sean was more than happy to assist, and a week later a rather heavy 60pound package arrived.

First off, it would take a couple of alpha male gorillas to do any damage to the shipping box. The SP3 is packed that well. Be warned, lifting the SP3 out of the box is not to be taken lightly as this piece is very heavy at 56 pounds. Once unwrapped, I was stunned by the absolutely breathtaking design. In my humble opinion it is the best looking piece of audio equipment on the market today regardless of category. Most tube amps are fairly blocky and designed for functionality rather than looks. The SP3’s designers obviously had other ideas. The exterior is wrapped in a metallic pewter paint finish. But what makes this unit truly stunning is the Art Deco shape. The combination of squares and rectangles with soft rounded edges sets the stage for the dual layered arch that highlights the volume control knob.

The Onix SP3 was designed and engineered by Melody of Australia. The assembly is done in the South of China where AV123 president Mark Schifter maintains a home for his frequent trips to the factory that he co-owns. This oversight helps maintain the high build quality that the North American market demands. In addition, this ownership allows for AV123 to offer some exceptional pricing. For example, the combination of the SP3 and the Reference 1 monitors are priced at an obscenely small sum of $1199. It’s this kind of aggressive pricing that forces the industry to stand up and take notice of what’s happening in the offices of this Colorado Front Range company.

A total of ten tubes make up the SP3 grouping. The four 5881’s sit center-front under the cage. In a very nice touch, the cage lock into place with banana plugs, making for a very smooth removal/attachment. 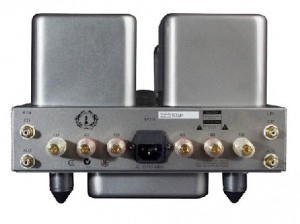 The side tubes come shipped with cylinder covers that are both secure and easily removable. Wanting to let the tubes breath, I immediately detached these covers. On the left side is the power toggle switch, then five holes for adjusting the tubes (preset at the factory). On the right side the toggle switch is used for selecting either CD or AUX.

The backside continues the simplicity. My favorite touch being that the right channel RCA inputs are on the right side when looking at the front of the unit, with the CD on top and AUX below. Next come three horizontal binding posts for negative post, then 4 Ohm positive, and the 8 Ohm positive. The center point houses the electrical cord. Followed by a mirror image for the left side.

For the tube rollers out there, Onix allows for upgrading without any warranty penalty. This kind of customer service support gets high kudos. It’s so rare to find a company so trustworthy of its customers.

For this review, the Onix SP3 was paired with my personal reference mini-monitors, the Totem MITES for part of the review. Other speakers include the Era Design 4 minimonitors, and the Aperion Audio 632’s. Due to the untimely death of my Toshiba DVD player, all source material came from my 60 gig iPod using only AIFF files. Prior to beginning each listening session, I let the tubes warm for at least one hour. While the tubes heated for each session, I did some listening using either my Harman Kardon PM665vxi integrated (150wpc), or the Adcom GFA 535 (60wpc) and GPT 450. Both of these solidstate pieces offer some quality sound for the dollar.

Once the hour had passed I switched over to the SP3. WOW! In every session the difference was startling, to say the least. The Onix placed the music in front and around me, nothing added, it’s sonic purity left me awestruck. The best comparison I can make is spending all year dealing with the sounds of the city, then one day walking up at a mountain lake with only the sounds of nature. The din of noise was lifted, leaving the ears free to float with the music. The HK and the Adcom were grainy in comparison.

In reviewing over several sessions to every type of music with the exception of hip-hop and rap, the results were the same each and every time; the SP3 is musical beyond words. Even the less than stellar digital version of Billy Joel’s 52nd Street was actually a pleasant listening experience. How it managed to make poor recordings listenable is admirable on its own, but to incredible pieces the musical projection is absolutely magical. The term soundstage gets bandied about in audio circles quite often; the SP3 takes that concept to a whole new level, creating a spacious instrumental gallery. Walking about my living room, it felt as though I could stand next to the various instruments and admire the artist close up.

To confirm the astonishing music I was hearing I changed speakers, from my reference Totem MITES, to the well-regarded Aperion Audio 632 monitors. The same silky-sweet clarity and spaciousness encompassed the entire room. The depth and radiance of the bass only increased. All from just 38 wpc, which proved to me that power, is not the end game, performance is, and the Onix SP3 has it in spades.

To say which type of music sounds best with the SP3 is quite difficult. The duet of Tim Weisberg and Dan Fogelberg in their second collaboration No Resemblance Whatsoever,with its breathy, floating flutes and the strong, yet plucky twelve-string guitar carve out an intimate session that defines their mutual admiration.

All high performing equipment, in my opinion, have one very standard capability, to bring out the subtleties of outstanding recordings. With that test in mind, I dialed up Ricky Le Jones, smokey masterpiece, The Magazine. Throughout such songs as Gravity, with its nuanced vocal comments, the SP3 gives the artist a specific territory for the notes to shine. Jones, who loves to fluctuate her sultry vocals between a sensual whisper and a melodic cackle, can leave many speakers and amplifiers mushy, the Onix just allows the sounds to cascade like waves on a beach.

I can honestly say that this is only the third time that I have truly been blown away by an audio product. The first was in 1980 with the Polk Monitor 10’s. The second was in 1989 by the lushes’ sound of the Celestion SL6si monitors. Now comes the Onix SP3 integrated tube amplifier. For only a thousand dollars new, I don’t know of any other piece of equipment that can offer so very much in providing such an astonishing listening experience. Just remember, for only two hundred dollars more you can own the Onix Reference 1 monitors.

No matter what type of music you enjoy listening to, the Onix SP3 will deliver a truly pristine listening experience. Am I gushing, absolutely! I’m so impressed I’m taking on any potential WAF battles and consequences to purchase the gorgeous Onix SP3, it’s that good, period! 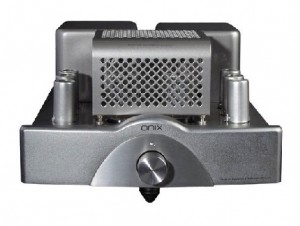