60 watts per channel, 20Hz – 20kHz into an 8 ohm load with both channels driven with less than 0.09% Total Harmonic Distribution

Outputs for 2 sets of speakers (A & B Channel)

Every so often a watershed product (or product line) comes along that shakes up the audio industry. In most cases the actual idea is pretty damn simple. In the mid-1980’s Adcom did just that. It came out with a slim-line, lower powered amplifier with the raw energy to kick the day-lights out of some big name, big power competition. It was the wolf in sheep’s clothing. 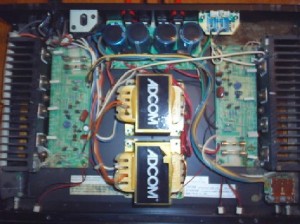 Adcom was not the first with the slim-line design. Harman Kardon had the 700 series amplifier a few years prior. But it didn’t have the monster lurking under the hood. The Adcom 535 was one piece in a whole new line of equipment bearing what is now their signature look. A flat face plate with one to several horizontal groves running from one edge to the other.

Gone was the massive face with macho man handles. Understated elegance was the statement.
The first indication of what was lurking under the hood came when lifting it. The 535 was no microchip flyweight. Their is some serious quality transformers and heat sinks powering this unit. The weight is equally balanced on both sides.

As is typical of power amplifiers, the front panel of the Adcom 535 has few buttons switches. Just a square power button with a red light on the left. Two instantaneous distortion alert lights (one for each channel) on the right, along with buttons for both A and B pairs of speakers. This, a nod of recognition that many buyers of the 535 were probably replacing a receiver operating more than one pair of speakers.

The back panel is in the typical non-painted steel look, with black lettering. One set of RCA inputs along the right side. Then cam the one clunker in the entire design; the connections for the speakers are not the typical audiophile binding posts. But instead, the mass market insert and twist connection. Maybe it was another nod to the beginner for ease of connection, but this style of posts has significant problems: First, no larger than 14 gauge wire can be used without issues. Second, it eliminates the usage of spades, banana plugs, pins, etc.. This was changed in later models, but so was the “B” set of speakers.

The real beauty of this amplifier lies under its black metal hood. A low profile version of many high power amplifiers. What surprises many first time lookers at the insides of amplifiers is how simple the design usually is.
The weight comes from just four parts: two transformers and two heat sinks. To show complete isolation the left and right channels are completely separate. The image to the left shows the virtual mirror image of the two sides. This balanced approach with the massive heat sinks to either side allows for even cooling of the 535 during heavy load periods.

The Adcom’s big brother, the GFA 555 was well known for both it’s brute power and occasional harsh sound. I, myself owned that model in the late 1980’s and experienced it firsthand. I counter-balanced it with the tube pre-amp, the Conrad- Johnson PV-7. Thankfully, the Adcom GFA-535 suffers not from that malady. Instead, it sounds more along the lines of Harman Kardon solid state pieces. A slightly warm sound. The piano music of George Winston, with its occasional sharp attacks hit and decay smoothly, something that I specifically NOT remember from its bigger sibling.

This is not to say that the 535 is perfect, by comparison to similar models produced today it would be considered slightly noisy and a bit dry. That includes the Music Hall A25 and the Parasound NC 275 to name a few. Those two models exhibit a more liquid quality to their output. But then again their engineers have had 20 years to improve upon the Adcom design.

The best way to describe the power of the Adcom GFA-535 is comparing a simple hammer to a small sledge hammer. One can hear and feel the impact, and the item being driven pierces the resistive force.

Where the 535 really shines is it’s ability to deliver difficult passages without compressing the sound. I specifically chose to run this amp with the Linn Keilidhs, not an easy speaker to drive with lower powered equipment. Using original Monster Speaker cable the 535 pushed the Linn’s to the max without causing the distortion lights to come on. Equally impressive was how cool the top of the unit stayed during the extended test. John Mellencamp’s Lonesome ubilee with its wonderfully diverse instrumentation and dramatic sound taxes many amplifiers. The Adcom just kept pumping.

I also ran the Adcom into the Infinity Kappa 200. This Infinity Kappa series are well known to be difficult speakers to drive. My HK receiver never was able to handle the Kappa’s load. The Adcom once again using its brute strength of 100 wpc at 4 Ohms,
made the Kappa’s flush. The effect of the sledge hammer!
To wrap up, if your budget is strained but you want to improve upon the sound of your receiver, take a serious look at the Adcom GFA-535. Chances are pretty fair that your local used dealer has these come in and out of stock quite often. If that doesn’t work, then roll the dice with Audiogon or eBay. Just remember, most any used dealer will give you some type of warranty, plus trade up options.