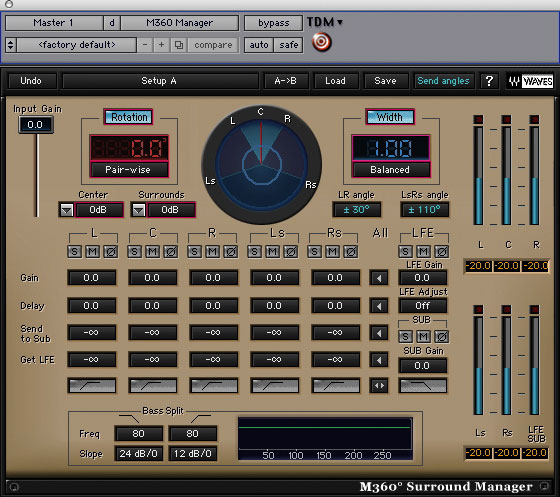 The R360° Reverb is interesting in that it generates only reverb tails and not early reflections. ERs are generated in the S360° Surround Imager, which works to complement the R360° by creating distance panned room emulation. Waves notes that particular attention was paid to the R360° tail-generation technology  the tails are perfectly de-correlated between all channels. It is also capable of running at true 96 kHz sample rate by using a compact version that operates only on HD systems. This compact version can also be run at 44.1 and 48 kHz, saving DSP power. The R360° also includes controls for the Reverb Sound and MIX properties, specifically designed for multichannel production.

The S360° is a surround panner and imaging tool. The S360° Panner is quite flexible, allowing you to set separate width and rotation for mono, stereo, 5-channel, or 5.1-channel sources. It features such items as choice over Pair-Wise and Triple-Wise panning, with the former distributing energy between two speaker pairs and the latter over three speakers. The S360° Imager is an enhanced panner, with shuffling for additional low-frequency width, as well as the aforementioned Room Model Early Reflections. You can hot-switch between the Panner and the Imager, and all the common controls will retain their existing settings. This is a very cool function, allowing you to begin with a Panner on a track, then add the Imager when needed. The Imager, however, does use more DSP than a Panner, but the option is there when needed. The Imagers early reflections are designed to work directly with the R360° Reverb, and both share some common presets.

Based upon the L1 and L2 UltraMaximizers, the L360° is a surround peak limiter and level maximizer. Working on both 5 and 5.1 channels at up to 96 kHz, it features brickwall peak limiting and Waves ARC (Auto Release Control). It offers five different link modes with three separate sidechains and is generally designed to be applied to the master surround fader for final output.

The C360° is a surround soft knee compressor, also working on 5 or 5.1 channels with flexible link modes. It features similar functionality and control as the L360°, also featuring ARC, but with a different sonic characteristic. The C360° can be inserted on any 5- or 5.1-channel track, Aux input, or master fader. It attenuates the signal before the threshold level is reached and attenuates more after the threshold is passed.

The M360° is the surround managing part of the Toolkit, providing bass management and studio monitoring calibration based upon the ITU Standard. It features two plug-in components: the Manager and Mixdown. The Manager is inserted on a master surround output and handles the monitor calibration and setup with a sub/satellite playback system. It also allows for software adjustments of speaker angles to work with the Panner, as well as per-channel gain and delay for level and phase alignments. The included Target Adjustment Options even take into account such useful things as 3 dB surrounds and +10 dB LFE playback options. Mixdown can be inserted directly after the Manager, allowing for preview of mono, stereo, LCR, and LCRS imaging. It also features a Mix LFE control for LFE inclusion on mixdown previewing, as well as an input gain control in case the channel summation causes clipping.

Included as part of the 360° ToolKit are LFE 360° Low Pass Filter and IDR 360° Bit Requantizer. LFE 360° is a seventh-order filter that lets you preview how an encoders LFE filter will affect your mixes. The recommended placement is before the M360° Manager. IDR 360° allows for multichannel word length reduction with flexible dither and noise shaping capabilities.

As you might imagine, the 360° ToolKit is a comprehensive utility far too deep to thoroughly cover in this article. It is, however, quite simple to use, and it quickly made its way into my working routine. In my most recent surround project, I applied several different 360° Reverbs in one session on strings and vocals with excellent results. The 360° Panners let me step beyond my square Digi X/Y panners on certain tracks, and the Imager, with its early reflections, bought the feet of a flamenco dancer to life in unexpected ways. I found myself checking various downmixes with the Surround Manager, and experimenting with crossover points in the bass management realm. As a fan of the classic L2, I was pleased to have the L360° to step up my gain without character change. Overall, the 360° ToolKit makes a valuable addition to any Pro Tools user who works in the multichannel world.