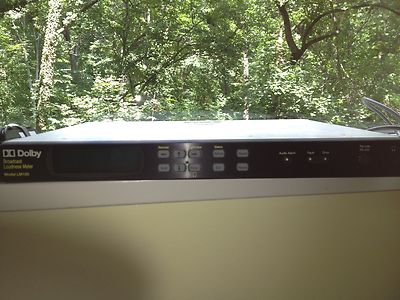 OK, everyones experienced this scenario multiple times each time theyve watched TV. The commercials always seem way louder than the program so you reach for the remote to turn down the level, then back up again when the program resumes. Even worse is when the level between programs varies in level (ever notice how quiet South Park is compared to everything else?). And now with the 100 or more different channels available to us thanks to satellite and cable, were presented with yet another problem as the level varies substantially as we switch between channels.
If you think the consumer is the only one frustrated by this, rest assured that so are broadcasters. But before you can normalize the level between programs, commercials, and channels so theyre all relatively the same, youve got to have some way of accurately measuring these levels. Enter the Dolby Labs LM100, the first measurement device specifically designed to accurately and consistently measure television loudness. More specifically, it measures the loudness of dialog. Why is this important? Research has shown that as listeners tune across different television services with varying sound levels (including going into and out of commercials) they make adjustments to the volume control in order to normalize the level of dialog. This important fact is often overlooked as broadcasters and program producers assess the level of their programming.

Why Do We Need A New Measurement Method?

For years the broadcast industry has quantified the level of their programming utilizing Peak Program Meters (PPM) and Volume Unit (VU) indicators, but its important to note that both are used to read signal voltages only, and never attempt to measure subjective loudness. As a result, several different voices recorded at the same level (they all deflect meters to the same mark) will probably sound different in loudness to the listener. PPM and VU meters are usually aligned to a predetermined facility reference level, so they only have an arbitrary relationship to the dialog loudness within a program. As youve probably noticed, if both VU and a PPM meters are calibrated to display a reference tone equally, any speech that averages 0 VU will make the PPM meter indicate levels considerably above its reference level. On the other hand, speech that averages at the PPM reference will probably indicate many dB below 0 VU (our original reference). What this tells us is that the reference level is not the same as the speech or dialog level of a program. 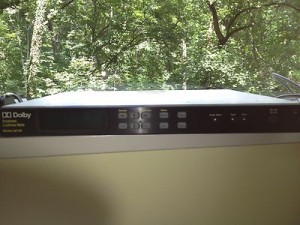 Another issue is that both the PPM and VU meters have a flat frequency response over the entire audio spectrum and dont address the fact that human hearing is nonlinear with respect to frequency. This accounts for some very large meter deflections that dont correlate with a change in perceived loudness. The VU meter is often very difficult to interpret even to an experienced engineer due to its dynamic characteristics and its small usable dynamic range, which is only about 13 dB with the top 6 dB of this range dedicated to 50 percent of the meters overall scale. As a result, with uncompressed material the indicator tends to fluctuate more than the perceived loudness change, which makes this type of device difficult to use to assess the subjective loudness of broadcast programming. Experienced engineers generally use their ears to balance the different elements of a program and to set the overall loudness, while watching the PPM or VU meter to make sure that signal peaks arent clipping, but this doesnt exactly give a precise measurement of the actual dialog. Enter the Dolby LM100.

The Dolby LM100 is the broadcasters answer to finally measuring the speech level of a program. Not only will it measure the dialog level (utilizing a proprietary algorithm called Dialogue Intelligence) of an analog or a 2-channel PCM digital signal, but it will also measure other digital signal types such as Dolby Digital and Dolby E, including metadata, sample rate, bitstream errors, and traditional PPM-style channel level measurements from mono to 7.1.

Built to the typical high-quality Dolby standards, the unit is both compact and robust, fitting into a single rack space. The rear panel features two analog inputs that accept 1/4-inch or XLR connectors, a BNC jack for the digital input (a second is supplied as a loop-thru), and two RCA outputs for confidence monitoring. There are also three DB9 connectors; one for remote functions, one for signal condition alarms, and one for General Purpose I/O status information and control.

There are actually two versions of the LM100. On the LM100-NTSC, a standard 75-ohm RF input and composite video output connector on a female BNC is included, while on the LM100-LTC those connectors are deleted and a timecode input port is included instead.

The front panel is spartan, but does the job, with a display, six multifunction buttons (Shift, Remote, up arrow, down arrow, Brightness, and Enter), and dedicated Setup, Escape, Reset, and Pause buttons. Three LED indicators (Alarm, Error, and Fault), an RS-232 port, and a headphone jack complete the front panel.

The display of the LM100 can display the current measurement values and active settings for a selection of setup parameters as well as the condition and content of input signals. The main status menu shows the current measured dialog loudness value as well as information about the input stream. More input stream information is available by using the arrow keys to scroll through additional status menus and screen displays.

The primary screen is divided into three main sections, with the left providing the input status (analog or digital Dolby Digital, Dolby E, or PCM), sample or data rate, number of channels, etc). The center section is the one that actually displays the measured dialog level, displaying both the level in dBFS for digital and dBr for analog sources, as well as the channel(s) that the dialog level is being derived from. By default, the right segment displays either the Dialnorm value in Dolby Digital or Dolby E, or the peak level in PCM, analog, or RF. The peak value for Dolby Digital and Dolby E can be also be viewed by pressing Enter while on the main status display. All other displays are subordinate, with level meter, metadata status, error and alarm statistics, system log, and status and input control available. As a side note the LM100 can automatically log loudness measurement history, alarm data, and error conditions utilizing any terminal application or accompanying Windows Remote Application (introduced at NAB 2004 and available this summer).

I used the LM100-NTSC for about a week looking at just about every cable and major network TV channel. As you can imagine from everyday casual listening, the levels were all over the place. About the only recurring theme that I found was that, on digital channels, the Dialnorm was set at either 25, 27 or 31, with the dialog measuring roughly 6 dB from one channel to another. Now considering that the Dialnorm value for each program or channel must match the actual (i.e., measured) dialog level, its possible to have as much as a 12 dB variation from channel to channel, although this only happens in extreme cases (hello, South Park). Upon decoding a Dolby Digital bitstream, the Dialnorm value determines what the decoded dialog level will be.
So, if a particular channel has a Dialnorm value of 31 dB and the dialog level is being measured (by the LM100) at 27 dB, it will decode 4 dB louder than it should for a decoder operating in Line Mode. Hence, a proper setting of 27 dB would correct the problem. In fact, Ive seen measurements of a single network over a 24-hour period where the level during primetime was 6 dB louder than during the rest of the programming day. Wow, broadcasters really need this box.

The LM100 is an effective new tool in measuring what until recently was virtually immeasurable. As soon as more of these get out there in the hands of broadcasters and post-houses, perhaps the dream of consistent television audio levels will finally be reached.