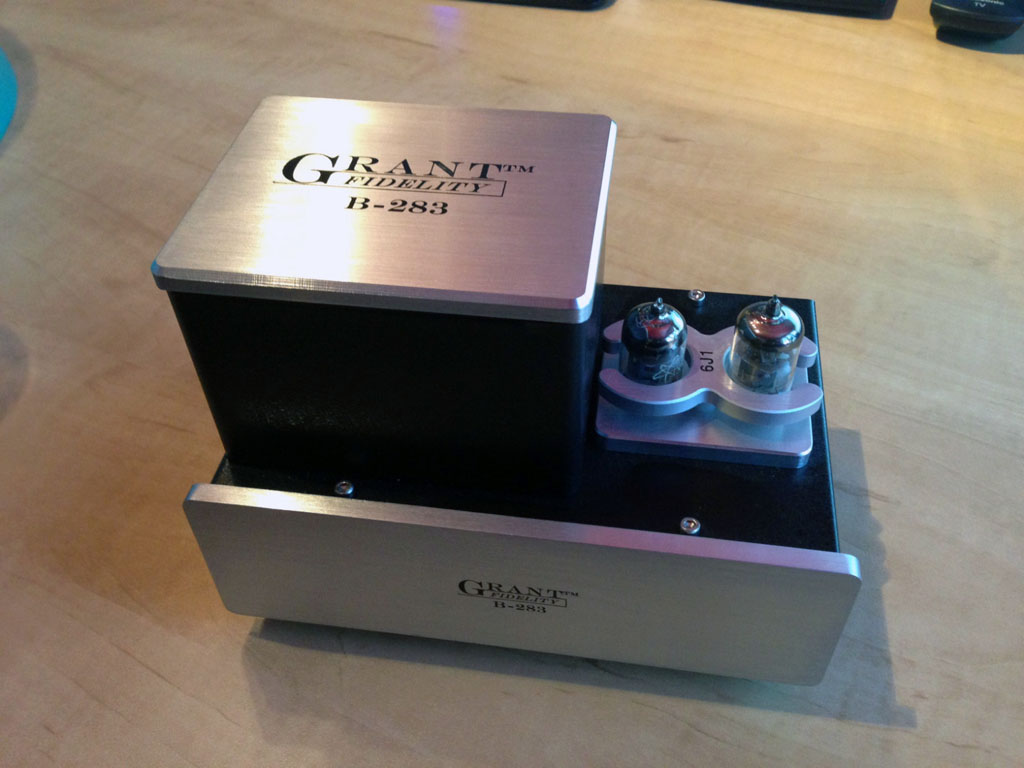 Addiction is a hard thing to break free of, especially when audio is involved. It all comes down to craving a certain type of presentation, sound, and tone. I’m no different than anybody else, in that I find my sonic craving is best filled when those three characteristics are covered in some fashion. My biggest addiction is the “warmth” that tubes impart on the musical signal. I’ve heard several explanations as to the cause of this auditory signature, so I won’t attempt to explain, etc., it just isn’t worth the hassle to be honest.

At the end of this past summer I finally completed the building of my secondary rig for the family room. It wasn’t assembled in one swoop, actually it took just about a year to complete. But once the pieces were assembled I found that as clean and pure as the Dugood cd transport and the Promitheus DAC worked together, I missed that tube warmth. To put in a tube amplifier would defeat my desire for a solid state amp-based system. But then I remembered the Grant Fidelity B-283 Tube Processor Buffer that I had seen at the Pacific Northwest Audio Gathering and at VSAC last spring. I got in touch with Ian Grant as he was driving home to Calgary from RMAF in Denver, and in a few days the B-283 appeared at my door.

First off, this is a very compact little unit, it easily fits on the top of the Promitheus DAC with plenty of room to spare. The look is classic brushed aluminum on a black base. Along the left side is a full-size power switch (nice touch!). On the backside in a horizontal layout is the gold-plated RCA input and output jacks, and the standard 3-way power receptacle. The top is divided into two halves, the left containing a second story if you will that houses the power supply. The two small 6SJ tubes sit on the right side enclosed in a small cage. 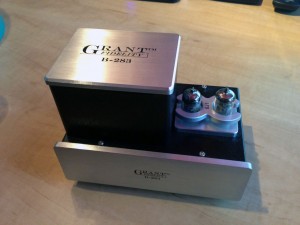 The interesting thing I have found from doing a Google search is that the B-283 is being used at artist level to recreate tube sound coming from classic guitar amps. The Musical Fidelity Tube Buffer was also mentioned by it seems that the B283 price made it a hit. A popular reason was that the artist was getting a “classic” sound without the artificialness of sending it through a computer to process the sound.

I setup the B-283 first between the DAC and the preamp, then later between the preamp and amplifier. In both cases the when the B-283 is off the signal passes on through without issue. In my sample model, output volume increased 3dB, this at first disappointed me as I wanted to be able to compare sonic qualities without having to adjust the volume. But, after a bit sampling I was able to gauge how much volume difference existed and quickly adjust to the proper setting for an even comparison. Even with the volume corrected the sonic output is wider and richer. It’s not a bass frequency improvement as from research I found that the 6J1 tubes are not designed to boost low frequencies. 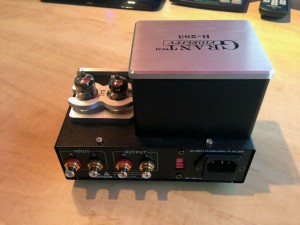 One of the questions I had for the B-283 after burning in the tubes was how the unit would play an already rich acoustical guitar piece? For example, “Sase” from George Winston’s Plains cd, it’s a gorgeous two-minute piece but the sonics are as dense as the richest Boston Cream pie in existence.

One of the poorest sounding recordings in my collect is Billy Joel’s 52nd Street, such a fine selection of songs ruined by a very poor transfer to digital. The upper frequencies have a harsh edge and lack any sense of clarity. To put it simply, it’s a very cold cd to listen to critically. With the B-283 engaged, the performance does become more three dimensional. Joel’s keyboarding does give out some sense of warmth that is better than nothing, but still not at the level that this fine work deserves. The point is the B-283 does improve the listening experience on 52nd Street.

Many audio enthusiasts have a specific instrument that they like to test the capabilities of speakers or equipment. In the past several months I have come to use recordings of xylophones as my reference instrument. The tonal range is similar to that of the cello, and having been a percussionist as a teenager I have a bit of reference to base my opinions. The change in sonics with the B-283 includes both richness and soundstage. The performance comes from a wider point in the room. I went so far as to mark the width of where I was hearing the instrument perform. I even turned down the volume to below the level of the non B-283 level by 2 dB just to see how wide it the soundstage would be. The result, it was still a good foot wider than without the B-238 in the signal. 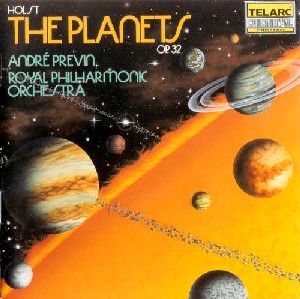 The big test is still symphonic music in my opinion when it comes to the complete capability of a piece of audio. I went in search of pieces of music that offered a big, open soundstage. Gustov Holst’The Planets was one such piece, with passages that expressed both the vastness of space and the power of such famous parts especially “Mars” with the bass drum beating while horns pound out a military march. The B-283 pushed out the commanding opening into an “in your face” statement.

The signature movement of the entire piece is “Jupiter” made famous once again in the scene from The Right Stuff, where John Glenn is launched and orbited the earth. With the B-283 the room came alive with a depth and rich details that makes “Jupiter” one of the truly great energetic pieces in all of classical music to hear live.

The Grant Fidelity B-283 tube sound to me is like sugar, it’s wonderful addition, however, there is a point where it can become too sweet. When I placed it between my modded Jolida JD100 tube cdp and the Onix SP3 integrated tube amplifier. The result could best be described as overly rich, details became muddy, the sound heavy, with what I felt was a loss of quickness. The B-283 belongs just as it is designed, a sweetner for a solid-state system.

On occasion I get in a product for review that exceeds my high expectations based upon what I hope it will do for my system. The Grant Fidelity B-283 Tube Processor is one such item. It offers a quality harmonic tube sound experience at a price that virtually any super cheap audio fanatic can afford. The richness and expanded soundstage it brings to a system far out weighs the harmonic tweaking that takes place. It is one of those few pieces that makes such an obvious change in a rig’s performance. What it has done for my family room rig has been so pleasing that I am giving it my highest recommendation by making it a permanent part of the system.