The K.I.S. philosophy is a reminder that as our world becomes more complex, the best solution is still the simplest. In the world of digital audio converters, that isn’t always easy, especially considering how young the concept of DACs is to the audio community. The medium is still young enough that designs are quite original. The standardization of the category hasn’t yet forced creativity to the trash heap.

One of the more original audio designer/manufacturers is Nicholas Chua of Promitheus Audio. Located in Malaysia, Nicholas has assembled a highly-skilled crew to hand-build each piece of equipment. Last March, Affordable$$Audio writer Brad raved about Promitheus’ flagship product, the TVC passive pre-amp. Not a surprise, as various forums have proclaimed the TVC one of the best thought of components in audio circles.

Last fall, Nicholas and I started corresponding about his new DAC, and being jealous of my writers who already had reviewed them, I talked Nicholas into sending me one of his latest creations. Even with the great distance, in just over a week I was surprised to find a box from Promitheus inside the front door. Being a fan of real wood, I quickly opened the package and appreciated the beauty of Merbau wood. The grain and coloring are very similar to mahogany. Coupled with the textured black steel top, the merbau wood gives the DAC a very classy, understated look.

All device connections and the control switch are located on the backside. Why take away focus from the music looking at lights and buttons, when the music is what matters. Unlike most manufacturers, Promitheus uses pure silver RCA connects for both the digital input and analogue output connections. A very simple toggle switch is employed as a selector between input choices. This means the power stays on continuously.

Not wanting to miss an opportunity, Nicholas included one of his own Promitheus power cords. Building on his belief in silver, each cord “uses Oyaide Plugs for Male and Female, and Mono-crystalline Copper for the power cord. Super thick (1.5micron) silver is plated directly onto the polished surface of the receptacle and blade. The polishing process is again applied (twice) on the silver-plated surface, which then receives a final rhodium plating (0.3micron). This combination, and the thicknesses of the plating(s), lead to the final sound character. The quality of the polishing process also influences the sound quality.” I test tone measured this cord against my reference AudioArt Power 1 cord. They performed identically on measurements.

The real impressive work comes once the top is opened. Every part of the design, according to Nicholas, is focused on making the signal as quiet as possible. The wiring is made of two types: 7N copper for internal, and Teflon coated for the power supply. The transformer is a nickel-pulse design, built by Promitheus. The core (made of nickel) is wound to a tight two mils (0.05mm) lamination. According to Promitheus, this breaks up the digital grounding, leaving a quieter presentation of the music. Another step in reducing noise comes in the form of regulators placed both before and after the DAC chip.

The balance transformer is specially wound to an M6 core, much like Promitheus’ well-regarded Balanced Power Supply. There are dedicated windings for both the digital and analogue sections. In following this design, the power is not shared, leaving the analogue section free of any digital noise. This is accomplished through the usage of many electrostatic shields. The shields direct such noise to the ground according to their website.

Along the bottom left side of the board is the TDA 1545 asynchrous reclocking DAC chip, operating at 100 Mhz. The clock receives its own power supply to avoid sharing its noise with the rest of the unit. The DAC section has its own master regulator that, in turn, feeds a regulator that is dedicated/isolated to each chip. Even the op-amp section receives its own regulator, in order to separate noise from left and right channels. Nicholas also added in the nice feature of an adjustable gain path choices of 1.2, 2.2, and 4 volts, thus giving the owner final control. Lastly, for the output, transformers are used to couple the analogue stage of the DAC to your equipment down the signal path, allowing for impedance matching, once again using the M6 winding core. 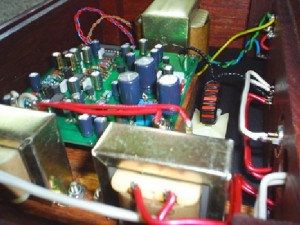 How serious is Nicholas Chua about eliminating noise in the sound path? The power-on diode light in the DAC’s Nicholas now builds, are properly grounded. Why be sloppy with item that gives noise a chance to come back in after all the effort to leach it out of the equipment?

The Sound of Promitheus DAC

In order to best judge the sonic differences with and without the Promitheus DAC in the system, I hooked up the analogue output of my modified Jolida cdp into the one input, and the analogue output of the DAC into another. Using a test tone and decibel meter I level matched the two input signals to within 1db (the non DAC signal had a hair advantage).

Over a month, I did a great deal of listening with a variety of music. Some definitive sonic attributes became apparent. The Jolida’s analogue section passes thru a tube for each channel. I’ve always felt that this added a bit of [the typical audio phrase warmth???], especially to acoustic guitars and other string instruments. The digital out on the Jolida circumvents this stage, from my understanding. A very different sound came forth, less warm, but more detailed. The day and time determined my preference.

Not satisfied by this arrangement, I brought in my secondary player, an Onix CD-88. Being able to stay within solidstate circuitry I felt would make for a fairer comparison. The difference was immediate; while the CD-88 is an excellent value with a solid design, it is a budget player. The Promitheus DAC not only lowered the noise level, but brought forth inner detail that otherwise would have gone missing.

The guitar work of Larry Carlton from Collection provided several examples. The second track “Smiles and Smiles” presented the clean plucking and strumming of Carlton’s deft touch without any sense of fuzziness. In addition, the very high, breezy sound of the electric keyboard was stunningly pure.

The other instrument I felt would show whether the Promitheus DAC was up to the challenge is the piano. Much like a guitar, it exudes tremendous depth and offers a multitude of micro-dynamics. Recently, I acquired Keith Jarrett’s Radiance recording. Jarrett’s ability to make the piano “sing” is well known. There is a passage in the second disc where I truly got the chills–the carrying of various notes with their individual tones was scary in its realism. I played the section several times making sure what I was hearing. Next, I played the same section thru the RCA outs directly into the modified PS Audio. The difference was palpable. Without the Promitheus DAC, the notes blended rather than having individual space. 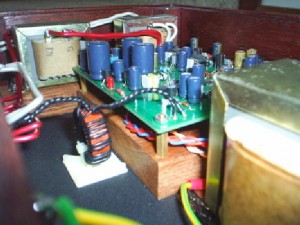 On another evening, looking for some music I haven’t played in a while, I pulled out Joe Jackson’s Big World cd. This selection has always held a love hate relationship with me. Individually, the majority of songs are terrific, but somehow, as a group they just don’t stand together the way the brilliant 1982 release Night and Day carries the listener from beginning to end. The haunting “Fifty Dollar Love Affair,” with Jackson’s slightly edgy vocals, come thru without coloration. The song is a reminder of how a voice can dictate mood not just by tone, but by pushing the artist to his limit without crossing into off-key disaster.

The ultimate test of a component’s ability to play “big” is with orchestral music. Nothing matches a full orchestra when it comes to finding strengths and limitations in equipment. Over the years I have come to appreciate John Berry’s score to Dances With Wolves, in large part because the music reflects the expansive prairie in openness of the instruments. But with the openness comes noise of empty areas in the soundstage. The Promitheus DAC drops that haze, leaving only the distance between instruments, thus giving the listener the “big” sound. 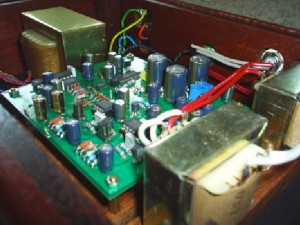 One thing I haven’t mentioned is that Nicholas Chua was kind enough to send along a USB to Digital RCA converter. This allowed me to experience the Promitheus DAC in my compute server rig I wrote about in the December. In comparison to the Fubar DAC, the Promitheus provides a lower noise floor. This wasn’t surprising, as the units are designed for much different applications. But it does demonstrate that Nicholas’ idea of eliminating as much noise as possible is a fruitful one. Maybe someday a version of this DAC will be available with the built-in USB, but only if Nicholas can keep the noise out.

One of the things in audio I value the most are manufacturers who take the time to explain why they chose the parts they did, and the goal in using them. When you visit the Promitheus website, or read over the manual, Nicholas Chua takes the time to explain the parts and the design used in getting the most bang out of the parts used. The customer knows up front that Nicholas set out to eliminate as much noise as possible from the unit. Each phase of the design went thru the process of answering the question, “Is this as quiet as it can be?” The results, to my ears, are an emphatic “Yes.” Nicholas informed me just before deadline that he is working on a USB version, but in typical fashion it won’t be ready until he is satisfied with the lowest possible noise floor.

The Promitheus DAC is a testament to beautiful, understated design, and a fanatical quest to reduce noise. The fact that the DAC can be purchased starting at just $405 with this level of hand built quality makes it a terrific bargain. There is a very good chance it won’t be going back to Nicholas.

First and foremost I would like to thank Mark and all the good fellows at Affordable$$Audio for personally taking the time to review our piece of musical instrument.

To illustrate further: ‘In the case of a high-performance digital filter SM5842, this process is done in 32bit and the filter round them up to 20bit to the output, creating more errors in the re-quantizing process’ -except from Kusunoki Pioneering work into Non-Oversampling formats.

Therefore the result is, we find the non-oversampling DAC to be superior in the areas of musicality and engagement. It draws and captivates the users to the music. After all, Hifi is all about enjoying the music.