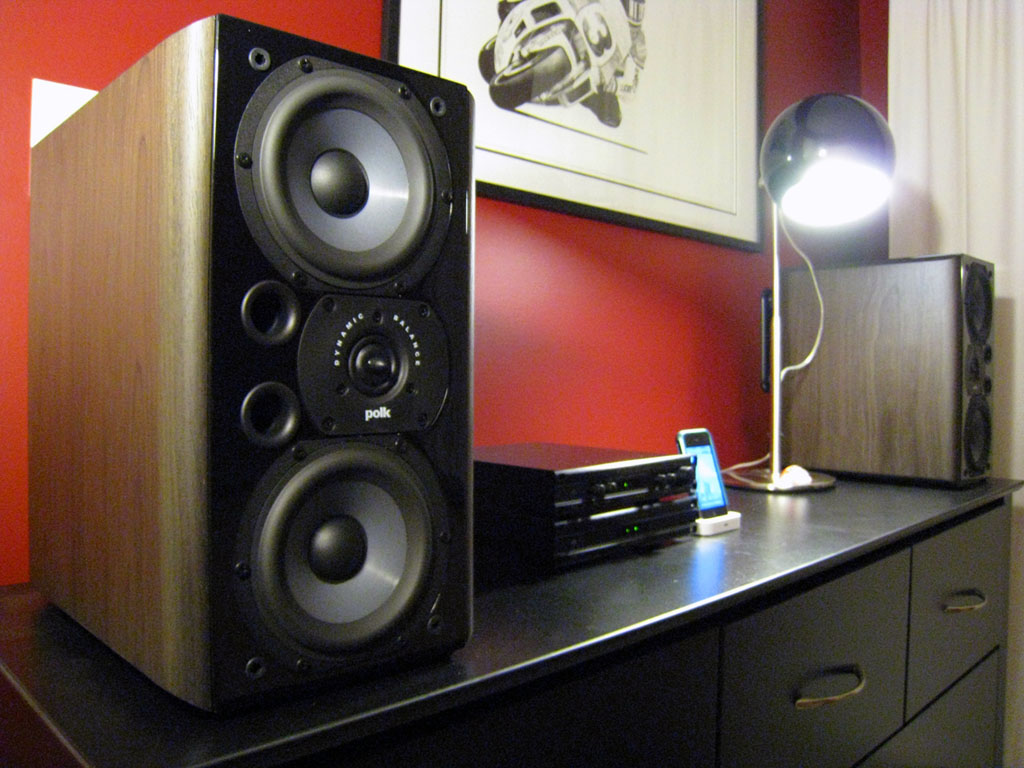 The Polk Audio LSi9 Speakers were setup on makeshift (err…redneck) stands that placed the tweeter at ear level. My apologies for the cheesy stands, but I haven’t owned a standmounted bookshelf since 1992. Front baffles were approx 4′ from the rear wall, 5′ from side walls, 7′ apart, and 8′ from the listening position with about ½” of toe-in. The room is approx 23′ x 48′ (14′ vaulted ceiling) great room, the living room/dining room/kitchen are all in a single open space, with the living room (listening area) at the first 1/3 of the space. This means no wall for about 28′ from behind the listening position. Grilles were left off. There were no stock jumpers supplied, so we used 4″ lengths of 14awg copper wire to jump the binding post on the speakers.

Oddly enough, the LSi9 looked smaller than I had imagined, at first I thought they were LSi7‘s. The build and aesthetics are very nice—the speakers are heavy for books helfstyle speakers. The finish was Ebony and well executed with black piano gloss top. Binding posts are of good quality and beefy/rugged; everything about the build exudes quality & elegance. They wouldn’t look at all out of place sitting next to rack full of Krell or Levinson gear.

From the moment I hit the “Play” button on the CEC I was immediately impressed with the LSi9’s BIG sound. It wasn’t the typical bookshelf sound at all, and Wes and I were all smiles. They filled the room quite easily with modest volume settings, and the midrange grabbed me right away during the Steely Dan set. Wes commented on how Allison Krause’ voice can sound a bit nasal on lesser quality speakers, but noted that her vocals sounded very good thru the LSi. I agree, extremely accurate in weight, tone and realism. The LSi9 is a wonderful “vocals” speaker. I noted during the John Mayer set that the Lsi9’s do miss the lowest octaves, but to be expected on a bookshelf speaker-still bass was very good; the best I’ve heard in a bookshelf especially considering they were off the back wall a good distance. I can understand how the LSi9 might be accused of being a little heavy in the midbass if it were closer than the 4′ distance he had them at. Midrange was a “ten ring” all the way, beautiful. Treble was very extended and though a touch forward as compared to my Energy Connoisseur’s, it never got edgy or etched. The air around cymbals was apparent and abundant – a very nice 3 dimensional portrayal. Imaging was very good, soundstaging left-to-right very good, depth pretty good. Piano music sounded extremely real, no huffy or chestiness in the sound of the notes, just beautiful bell-like clarity with great attack and smooth decay-two thumbs up. Caveats? A few minor nitpics: Keep in mind this is a bookshelf speaker and my listening room is large. In that context, the Lsi9 did begin to unravel a bit when pushed hard – very hard. Some perspective: My preamp volume knob has never seen the 1 o’clock position, we had the LSi’s at about 11:30; I approximate (seat-of-the-pants-estimation) that we were probably pushing 103db or more when I noticed the speaker began to sound compressed in dynamics; hey, again, to be expected when pushing a bookshelf this hard in a room this big. Everything just shy of “concert” levels sounded wonderful, regardless of the material thrown at them, and was plenty loud and uncompressed for music well beyond typical listening levels. My only other observation was that on a couple of rare occasions, with certain music, the transition from midrange to the tweeter sounded a little disconnected – let me explain; On a few passages I felt like I could “locate” the tweeter as it sounded as if it were playing by itself, does that make sense? Let me try again, I could localize sounds coming straight from the tweeter, it was a little strange – and rare, so not that a big a deal. I noticed it specifically on a track that had finger snapping in it; the snapping of the fingers sounded like it was coming exclusively from the tweeter, rather than blended in with the midrange.

After much debate/brainstorming on the Lsi9 displaying dynamic compression, some believe that amplifier clipping may have been the culprit. Although I have doubts about this, it’s important to understand the Lsi9 can dip to 2 ohms in some frequency ranges. Bottom line, it might be wise to select an amplifier that is stable to 2 ohms. Just an FYI. I’m still convinced that what I heard was compression, not clipping, as the speakers didn’t sound harsh,, but rather the soundstage just collapsed; however, keep the above in mind.

I’m impressed; really impressed. The first 5 minutes of listening, Wes and I just stood there with our mouths hanging open, looking at each other in disbelief – we were speechless. The Lsi9 sounded much better than I had anticipated and that’s saying a lot, as I had pretty high expectations. It’s really amazing to see such a small speaker sound solarge. Wes and I were out on my patio as the system was playing, and I told Wes:

“from out here, you’d never know if that was the Polk’s playing or my Energy towers”…

Wes agreed. The midrange was gorgeous; treble very nice 99.9% of the time; and bass, as good as you’ll get in a package this size. It never sounded bloated or boomy, like a lot of bookshelves can, it was very clean and deep reaching at reasonable playback levels.