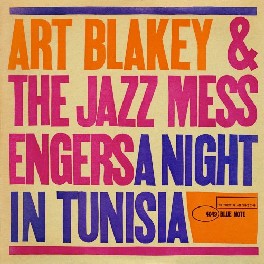 I clearly remember my first exposure to Art Blakey. I was living in New York during the eighties, in my first job out of college, and around ’85 or ’86 a friend invited me to join him at Sweet Basil, one of the pre-eminent jazz clubs in New York on Seventh Avenue South in the Village (sadly, recently closed). Art Blakey was the headline act that night; I had heard the name, but knew nothing about Blakey. It did strike me as odd that a drummer could lead a jazz band, but up to that point my exposure to jazz had been limited to Dixieland and I knew nothing about the artist. That ignorance ended that evening over twenty years ago. I had always viewed drums strictly as the means by which a beat was achieved; never had I heard drums played quite so polyrhythmically (and almost polyphonically). While I was familiar with drum solos, I was new to the concept of percussion as a lead instrument. Blakey and his cohorts nearly blew me out of my seat. It was a memorable evening, and one that was brought back to mind immediately when I listened to this LP.

Like a thoroughbred bolting from the starting gate at Churchill Downs, the title track blasts from the grooves of this 45 rpm double LP from Music Matters Jazz, a reissue of the Blue Note label. There is no lead-in, no build-up, no countdown of any kind offered here: Dizzy Gillespie’s A Night In Tunisia explodes into percussion, with Jymie Merritt’s bass line swiftly joining along with maracas to establish an exotic groove before Bobby Timmons (piano), Wayne Shorter (tenor sax) and Lee Morgan (trumpet) join in on the fun. The pace is relentless, and continues throughout the track, only relenting during Morgan’s lyrical solo…an absolute joy.

Things settle into a somewhat more relaxed groove with Sincerely Diana, So Tired and Yama, in which piano, sax and trumpet hold forth in tight solos with Blakey and Merritt focusing more on rhythm section duty. I’ve read that “A Night in Tunisia” is a bit of a let down after the first track. While the attitude certainly becomes more laid back, I can’t say that any track on this LP is a disappointment, even the ones in which we don’t hear Blakey at full tilt. The final cut, Kozo’s waltz, is a masterpiece of 3/4 cool, with Blakey coming back to the fore with a sizzling drum solo.

The vinyl…well, if you’ve heard any of the other MMJ 45 rpm Blue Note reissues, you will understand just how good vinyl can sound. These sessions were well-recorded by Rudy Van Gelder to begin with, but these LPs showcase some of the best mastering that I’ve heard on vinyl…ever. Steve Hoffman and Kevin Gray have done their usual superb job on this reissue. The 180 gram vinyl is pristine: Heavy and dead quiet. The sound floats out of the grooves with both weight and detail. No muffled bass, no fizzy highs, no honking midrange: This LP has a naturalness that sounds just right. The first time I heard the performers exchanging exhortations on the LP I thought that someone had walked into the room behind me. It’s that realistic. There are LPs being released as double 45s in some number at present. This is one recording that really justifies the higher speed.

The physical condition of the LPs was superb: They emerged from their inner sleeves clean, lustrous, and with no scuffing or scratches. The folks at Music Matters give full credit for this level of quality to Rick Hashimoto (Plant Manager at RTI) and Don MacInnis (RTI’s owner); their attention to detail has paid off. On various online fora I’ve been reading complaints about the quality control on some of the records coming out of RTI recently (notably the Doors reissues… though for what it’s worth, my Doors box set arrived in perfect condition). I’ve experienced no such issues with any of the MMJ releases, and as one of the Music Matters principals noted to me: “Why is it that you only hear about the planes that crash and not the 99.9% that land safely?” Indeed.

My review copy of “A Night in Tunisia” was not provided in the normal Music Matters album cover, however I assume that this LP will be packaged in the same high-quality gatefold in which the more recent Music Matters releases have been released. These glossy, highly detailed covers are state-of-the-art, with beautiful black and white photographs of the sessions inside the gatefold. Someone clever figured out a way to produce covers that have no visible seams… not sure how this was accomplished, but the result is a superb package. I had to purchase some extra-wide outer sleeves to accommodate these Rolls Royce covers. These LPs are not cheap at $50 a pop, but unlike some others that I’ve bought recently, these Blue Note reissues convince me that I’m getting my money’s worth.

Have you taken out a subscription to the MMJ Blue Note reissue series? If so, you’ll be receiving this LP in due course, and most likely you will be delighted. If you’re not a subscriber, and are cherry-picking the reissues, here’s one that you won’t want to miss. Buy it now, because sealed copies will appear on eBay at $300 the moment these sell out. MMJ’s “A Night in Tunisia” is an absolute delight.