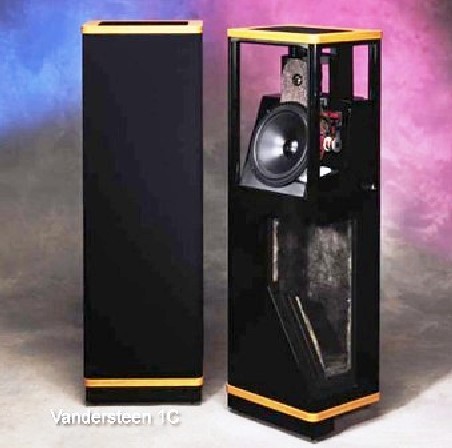 I went from a solid-state amplifier and preamplifier to a Leben CS-600 tubed amplifier several months ago. With only 30 push-pull watts at my disposal, I also needed more tube-friendly speakers than the very insensitive Harbeth HL-P3es2 I owned at the time. Consequently, I have had several loudspeakers in my room for extended evaluation over this time period.

The 1C is the current generation of the Model 1 in Vandersteen’s line. It is a 2-way bass reflex, employing a 1″ aluminum dome tweeter* and an 8″ polypropylene cone midbass. Back in the late 1970s, when the Model 1 was conceived, 2-way speakers employing an 8″ or larger midbass (like my reference Spendor SP2/3e) were very common. In recent years, the 8″ midbass has been supplanted almost universally with 6.5″ or smaller drivers, mainly to make speakers narrower and more room-friendly

Vandersteen’s core beliefs are timeand phase alignment and open baffles for midrange and treble drivers. Timeand phase aligned loudspeakers are difficult to implement effectively, and are therefore rare among dynamic loudspeakers. Since the 1C is a 2-way, only its tweeter is mounted open baffle. Based on the appearance of all Vandersteen models except their top end 5a and Quattro Wood, I think it’s safe to say that “form follows function” is another Vandersteen credo. With the exception of the recent Quattro Wood and 5a, all Vandersteens are cloaked in a black grill cloth (although other grill cloth colors are available). This is done, presumably, to keep costs down, since veneering (or painting) is expensive. Or, more specifically, it is done to apply the production costs where they matter most, the drivers and crossovers. While I prefer veneered cabinets, I like this approach.

Phase aligment is provided by using strictly first order crossovers. Impedance compensation is also used, making the 1C a stable and easy load for the amplifier: the specification lists a 6.8 ohm nominal that only varies +/-2 ohms. Because it is also efficient at a quoted 90 dB, the 1C is very tube-friendly, probably including even output-transformerless (OTL) designs.

Time alignment is provided by slanting the baffle. Time aligment is achieved when the sound wave lobes from the two drivers coalesce at a specific vertical point in space in front of the speakers, contingent on the amount of slant and distance the listener is from the plane of the speakers. This means that the distance the listener is from the speakers and the listener’s ear height must be accounted for. While this sounds complicated, it really isn’t. The 1C owner’s manual is very good and provides concise directions for obtaining time alignment based on the listener’s ear height and distance from the plane of the speakers. An obvious inference, however, is that the 1C (and probably all Vandersteen speakers) have very small sweet spots.

A couple of other important notes:

System and Set up

The rest of my system comprises a Leben CS-600 integrated amplifier (30 wpc push-pull via 6L6 or EL34 output tubes), a 47 Laboratory Shigaraki transport and DAC . My room is 13′ x 15′ x 8′ high. It is acoustically treated and a dedicated AC line feeds the stereo equipment. Ancillaries include new old stock tubes in the Leben, a Yamamoto 4 shelf equipment rack, a Cablepro Revelation II power strip, and various cables from Cardas, Zu and Cablepro. I do not use AC filtration or surge protection. Speakers are oriented in the classical manner in my room, i.e., firing down the long (15′) axis. The equipment rack is situated along a side wall towards the rear of the room (essentially directly across from my listening chair). 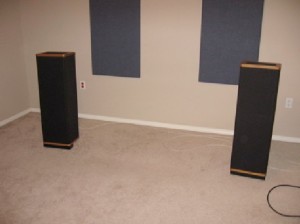 The 1Cs were set up as follows: 6′ apart, 3′ from the front wall, and 3.5′ from side walls. My listening seat is 7.5′ back. While I normally prefer firing speakers straight ahead with no toe in, the wooden dowels on the 1C, over which the black grill cloth is fitted, would not permit this. Firing straight ahead, the 1C sounded very dull and lumpy. I ended up using a minimal amount of toe in to overcome the “dowel effect,” approximately 10 degrees. I also tried them toed-in directly at the listening seat for reference. While most speakers sound overly prominent to me set up this way, the 1C mids and treble didn’t sound much different (i.e., “hotter”) this way. Note that the 1C does require at least a slight amount of toe in. The grill cloth is supported vertically using dowels. Firing straight ahead, the 1C sounded very odd, probably because of dispersion issues created by the dowels.

For critical evaluation, I use a basic yet eclectic repetoire of recordings. None of these recordings is “audiophile quality.” Quite the contrary, some are rather bad.

Whenever I think back over components I’ve owned or demo’d in my system, my mind generally centers on one or two aspects that stood out. When I think of the Vandersteen 1C, my immediate impression is one of relaxation. The 1C is laid back, smooth, forgiving, grainless and tonally warm and full. Nothing immediately or obviously wrong stands out. It doesn’t draw attention and thus “steps aside.” While it provides good resolution, it is far from an analytical speaker. Nor is it assertive due to overly prominent mids or highs, or overly “fast” (over-damped) in its bass response. Instead, it invites you into the music and has a very organic, natural (if perhaps slightly “slow”) pacing. The bass is slightly on the full and ill-defined side, but that’s an acceptable compromise in my opinion. I suspect, however, this is mainly due to being driven by 30 push pull tube watts and because my room is on the smaller side for their bass extension. Based on feedback from audio forums, I suspect it would tighten up considerably driven by a solid state amplifier, since my amplifier uses very little global feedback. 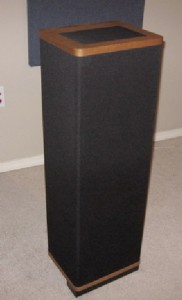 Also, the 1C is the first speaker with a metal dome tweeter that didn’t bother me. The 1C has really changed my perspective on metal dome tweeters, most of which seem to be implemented in such a way as to artificially enhance sibilance and treble-rich instruments like cymbals. The 1C was extremely smooth and natural with vocal sibilance.

In my mind there are two types of components (speakers in particular): ones that place resolution and transparency on a pedestal above anything else (particularly tone), and ones that provide these in a musically consonant manner. The 1C definitely falls in the latter camp. This also contributes to the 1C’s ability to “step aside” sonically. Analytical speakers have the tendency to engage the “left brain” too much during playback, since they highlight the interplay between the musicians and the recording itself, especially when the recording contains obvious problems like poor tape splices, “tizz and boom” frequency shaping, etc. When the recording provides this, soundstaging is also as good in width and depth as any previous speaker I’ve owned. The 1Cs, while never giving the impression of “utterly disappearing” like minimonitors such as the Harbeth HL-P3es2 I used to own, do not sound obviously boxy (e.g., cabinet resonances, images coalescing around the plane and/or between the speakers). Also, it is the first speaker I’ve heard in my system that provides truly credible and believable depth.

One other important caveat: as I mentioned earlier, listening at various positions throughout my room (and outside of my listening room) confirmed that the sweet spot of the 1C is indeed very small. This, I suppose, is one downside to a timeand phase aligned design.

I compared the 1C to the Spendor S3e, which are also rather tube friendly, in spite of their lowish sensitivity. The Spendors were used with 24″ high sand-filled Atlantis Reference speaker stands. I also replaced the S3e stock biwire jumpers with Cardas spade-spade magic jumpers, since my speaker cable is single-wire-only. terminated in BFAs. The S3e sounded best in the same position as I had the 1C. While putting them closer to the front wall fleshed out the bass more, it created tonal problems in the midrange that bothered me. Obviously, I won’t unfairly compare bass response or dynamics between a floorstander and a minimonitor. What is relevant and fascinating are the differences in the all-important midrange and high frequencies. While Spendor has obtained the similar reputation as Vandersteen as being laid back, warm and polite, in reality the S3e is the diametric opposite of the 1C. While the Vandersteen 1C is warm and laid back, even dark, by contrast the S3e is emblematic of the “modern” sound. To my ears it is analytical, bright, upfront and incisive. Whereas the 1C seems to prioritize tone ahead of resolution, the S3e does the exact opposite. In reality neither is acceptable. Tone and resolution should be balanced equally. But in relatively inexpensive “real world” loudspeakers, these are typical results.

What the S3e comparison does is highlight the 1Cs’ two main shortcomings (aside from the small sweet spot issue): a lack of absolute resolution and transparency, and a dark tonal balance (by whichI mean a warm, rich quality created by downward tilted frequency response through the mids and treble region). However, while the S3e’s hyper resolution and “see through” transparency is engaging and impressive at first, it grows irritating, even fatiguing, very quickly, on anything other than excellent recordings. The S3e trades tone for resolution and also has that nervous quality that many box speakers possess, unfortunately. Overall, I rate the 1C a superior speaker musically. The 1C will also show bad recordings, just not to the extent of the S3e. It makes everything listenable.

Like every speaker, the 1C has its shortcomings. The appearance, being utilitarian, isn’t to everyone’s tastes. I didn’t mind this too much but I did I nickname them the monoliths. To me, their most obvious “flaws” are subtractive in nature: a lack of resolution and transparency. In the right context, resolution and transparency are as important as anything in creating the illusion of flesh and blood musicians in one’s listening room. Others will also be bothered by the darker than average tonal balance, the somewhat overly rich bass response and the small sweet spot. I personally wasn’t bothered by these but I listen alone primarily and also find most modern speakers too bright, tight and analytical, to be honest. 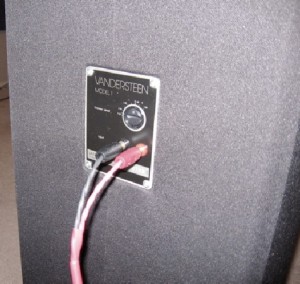 That aside, it’s otherwise all upside. The reality is, subtractive flaws are benign in a musical context. For example, trading ultimate resolution for tone and lack of fatigue is the right approach–although, sadly, not one taken by many designers these days. A long time ago, Stereophile’s founder J. Gordon Holt penned Holt’s Law, which is: the better the performance, the worse the recording will sound (or vice versa). This is the paradox of high end audio. Real world recordings are often bad, sometimes very, very bad. I do not listen strictly to “audiophile approved” recordings. In fact, almost none of mine are. The Vandersteen 1C is the ideal speaker for this circumstance: like any good speaker it is capable of playing well with much more expensive gear and growing with a system. However, because it is laid back, easy to drive, and lacking obvious vices, it also the perfect speaker for modest systems and difficult, overly reflective rooms. I can’t think of any speaker off-hand at this price point that is as balanced and musical as the 1C. It is nearly full range, fatigue-free, provides good tone and an acceptable level of analysis. It is also very catholic with amplification, be it a low-powered tube amp (though I doubt SET would apply) or highpowered solid state.

from aﬀordableaudio, By Greg Johnson