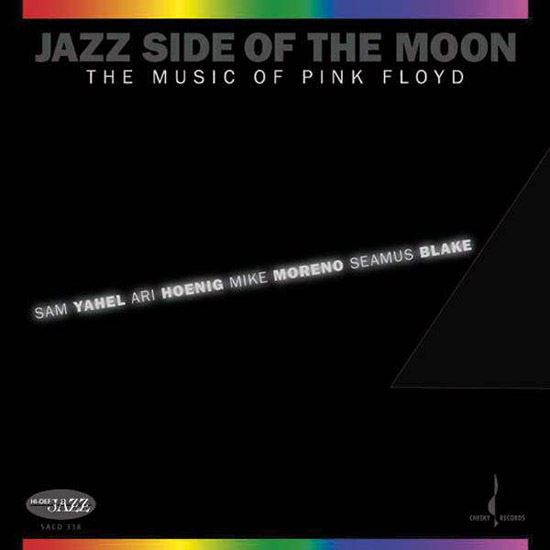 A unique Jazz album entitled The Jazz Side of The Moon is the next in Chesky Records series of newly recorded Jazz performances. The album is subtitled “The Music of Pink Floyd” and as you might guess, it presents a new take on the classic album The Dark Side of The Moon by Pink Floyd.

First Entry In The Producer Series
While the slipcover of this album notes that it is part of “The Producer Series”, it was recorded at St. Peter’s Episcopal Church in New York City. This was the recording locale of the label’s popular New York Sessions series of Surround Sound Super Audio CDs from last year.

To create a Jazz interpretation of The Dark Side of the Moon, album Co-Producer and Hammond B3 Organ player Sam Yahel called on three top Jazz artists to join him in this project. They are Mike Moreno on Electric & Acoustic Guitars, Ari Hoenig on Drums and Seamus Blake playing the Tenor Sax.

“I went home and listened to Dark Side of the Moon for the first time since high school and realized ‘Hey, there’s a lot of meat on these bones.’ Certainly the way they used effects was very fresh, and consistently served a musical purpose. And I wanted to capture that spirit using only the Hammond organ and a Leslie, it was our approximation of what they did in the studio, live in a purely acoustic environment, with no tricks.”

Production Equipment and Credits
The Jazz Side Of The Moon was Produced by David Chesky and Sam Yahel with Engineering and Co-Production by Nicholas Prout and Assistant Recording Engineer and Session Coordinator Rick Eckerle. Production assistance was provided by Lisa Hershfield, Felicia Douglass and Adam Minkoff. The Hybrid Surround Sound SACD was made by Sony DADC on their Hybrid SACD replication line in Austria.

Availability
The Jazz Side of the Moon on Super Audio CD is now available for purchase from the Chesky Records web site for $15.98. It is also available from music stores in the U.S. and Europe. The SACD is also available on a number of web sites that carry audiophile and Super Audio CD titles. This includes the Acoustic Sounds, Elusive Disc, CD Universe, Circuit City.Com, Buy.Com, Amazon.Com, Crochet.Co.Uk, Play.Com and JPC.de web sites.