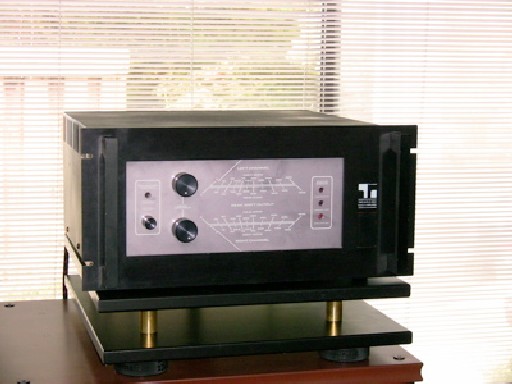 You know what is great about vintage gear? Well, you can buy it, use it for whatever time frame you prefer, and still get what you paid for it (or very close to). You know what is not so great about vintage gear? You have to hunt it down, take the chance it might need restoration, and deal with all your non-audiophile friends asking why you bought something that old. I must admit I fall into the category of loving to hunt down and toy with older gear. Sometimes I build an entire system of 20-plus-year-old equipment, and other times I add one piece of vintage to three or four pieces of modern.

Today I am pulling out of my closet a Threshold 800A 200-watt class A amplifier designed by Nelson Pass. This amp, with the serial #05763, was, I believe, manufactured in 1976. Sadly, there were only about 150 produced in the years between 1975-1977. I have owned the 800A since it was just a baby, only one year old, and it now occasionally pops up in my main system. The factory, when it was still in Sacramento, upgraded the RCA inputs to gold-plated ones, and I have replaced the factory cord with a homemade one. I took a beautiful yellow extension cord from Home Depot, cut it into a 6-foot length, and then added a Leviton male connector on one end. The other end was soldered into the 800A and is now a permanent fixture, like the original was. This replaced a rather dull-looking, short gray factory cord that eventually wilted with age and use. My next step will be to put in an IEC connector so I can use whatever power cord I fancy.

So, what do you compare a 30-plus-year-old amplifier to? I would venture to say, if it is made by Nelson Pass, anything! Sometimes I wonder why I ever take it out of my system at all, but I am crazy that way. I love change and can’t stop playing with so many different toys.

Aside from all the technical aspects of how innovative it was in its time, how does it look, feel and sound in today’s marketplace?

Ok, looks. This amplifier is huge. Using my tape measure, it is 19 inches across, 20 inches front to back, and nine inches top to bottom. Weight of the 800A is about 90 pounds unboxed. Lifting this up on top of my Salamander rack was fine when I was younger, but this time, I had my 21-year-old son help me. The one thing you do not want to do is to drop this on your floor or your foot. Especially your foot! Yes, I almost did this once.

How does it feel? Well, the weight factor certainly makes you feel like you are getting your money’s worth. Then you have the gain controls, two of them, on the front panel. They have a very graceful feel to them as they easily slide left or right. There is also a saturation control knob on the front, to be adjusted for 4 or 8-ohm speakers. This knob is to help protect you from damaging your speakers, but with all this power on tap I would be careful anyway. The entire amplifier is painted black and it looks and feels like professional equipment. Moving around to the back there is a fan switch that can be adjusted high or low, but never off. There are two RCA, but no balanced, outputs, and an assortment of fuses that are easy to get to if the need arises.

Now onto the fun part, how does it sound? I paired the 800A with my Legacy Focus 20/20s, a 5-way 7-driver speaker weighing in at 185 lbs apiece. Each speaker consists of (2) 12″ subwoofers and (1) 12″ “transition driver”, (2) 7 inch Kevlar midwoofers, (1) 1.25 inch Dome and one ribbon tweeter. They also have two ports in the rear. The Focus have a rated sensitivity of 95db @ 2.83V with an impedance of 4 ohms. For a preamp I used a Placette Passive with 3 inputs, one for my phono preamp and two for CD players. For this review, I used the Sony DVP-S7000 player for redbook CD playback. My turntable setup is an Oracle Delphi MKI with Grace 707 tonearm and Denon DL 301II MC cartridge. The turntable is fed to the Placette via a Whest PhonoStage.20 + MsU.20 power supply. The Placette, Sony DVP-S7000 and Oracle turntable are all plugged into a Monster HTS-2000 power conditioner. The Threshold 800A is plugged into a PS Audio UPC-200, which is connected to a PS Audio power port in the wall by way of The Musician power cord by Mr-Cable. Speaker cables are two 10’ lengths of Canare 4S11 wire with Monster Cable spade connectors on both ends. Interconnects are PS Audio Transcendent (solid silver series) from the xStream Audio Series. However, the cable from the Oracle turntable to the Whest phono stage is a home-brew version from a local audio salon. Plugged into an unused outlet nearby are two Blue Circle BC86 MKIII power line pillows, to help rid or reduce power line noise. These pillows are an excellent product from a very fine designer, Gilbert Yeung. Gilbert is a straight shooting, tell it like it is type of guy. He makes great audio gear in our friendly nearby neighbor Canada. Now it is recommended to drive the Focus speakers with 10-400 watts, so it seems that the 800A at 200-watts will fit the bill just fine. I turned on the amp, waited ½ hour for it to warm up, and then sat back to listen. 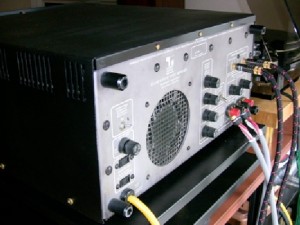 First up was Andrea Bocelli’s Amore CD. Bocelli has to be one of the finest tenors in modern times. The combination of 800A and Focus 20/20s allows the power of this performance to be heard and felt the way it should be. The 800A controlled the three 12-inch subwoofers/transition drivers with both ease and grace. His voice came through naturally without strain or CD edge.

Next up was Bob Marley and The Wailers’ Exodus CD, a true classic in its own right, and one I even once found my 17-year-old son listening to. Again, extremely smooth sound was coming from my listening area, with bass you could feel in your chest.

Then there was Nat King Cole’s The Best Of CD. When I put on “Unforgettable,” I just wish you were there to listen. The 800A took on a very tubelike sound. I had noticed this when I heard Bocelli, but now it was very evident. I know tubes when I hear them. I own an original McIntosh Mc275 tube amp and four Dignity Audio DA08SE mono block SET amps imported by CC Poon of Monarchy Audio. CC by the way is a great guy with excellent equipment. The best way I can describe the sound of the 800A is to say that it has strong tubelike tendencies, with powerfully controlled bass, but lacking in the ultimate midrange magic of the SET amps. Yes, you cannot have everything in one amp, although I keep looking. This amplifier is not for those looking for extended highs or ultra quick attacks, but rather those that prefer their music, well, musical.

One other thing is the 800A fan noise. Yes, you could hear it without any music on, even on the low setting. Once the music started, all traces of its existence disappeared, like the early morning dew on a summer morning. Only between songs did you notice it, if you really cared to listen. Me, I was still too caught up in the last song to take any notice.

Now what would a review of a product that was made before CDs were in existence be if I did not throw on some records? Well, let’s just sum it up by saying that I played a lot of Beatles, Joni Mitchell, James Taylor, The Who, Led Zeppelin, Dave Mason, Billie Holiday, Buddy Guy, Elvis, Rickie Lee Jones, Muddy Waters, and Ella Fitzgerald. I could not stop, as it just keep getting better as the amp warmed up. There has always been smoothness to records and the 800A paired with my Oracle turntable setup worked magic. Those of you without a turntable, fear not, for, as I have said, this amp is a beauty even with CDs.

Never did I play the CDs or records loud enough to move the meters on the front, suggesting I was listening to maybe three or fewer of this amp’s 200-watts of power. After playing continuously for three hours, at various sound levels, my amp stayed cool to the touch. I have had class A amps before and they heat rather up quickly, but not my 800A.

Music is a great way to touch that within us which is good, and worth exploring. Audio equipment is the means to bring us closer to that experience, but we should never lose sight that it is the musical experience, not just the equipment, that we are seeking. Bruce Lee (martial artist, actor and director) once said (in a movie called Enter the Dragon) “Don’t think, feel! It is like a finger pointed away to the moon. Don’t concentrate on the finger or you will miss all that heavenly glory.” Perhaps the finest tribute I can give this amplifier is to say that a few minutes into all my favorite CDs, I kept forgetting to critically listen and just enjoyed the music. 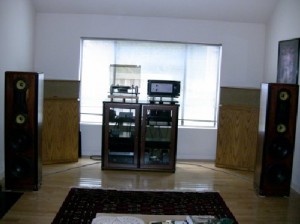 2 thoughts on “Threshold 800a review”