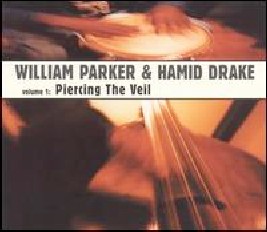 William Parker is one of the strongest personalities in avant-garde jazz today, both musically and otherwise. Having spent the ‘80s as bass player in Cecil Taylor’s groups, in the early ‘90s he settled down in New York, where he catalyzed the Improvisers Collective: a group of some of the Lower East Side’s most adventurous musicians. Parker has recorded with nearly all its members in various settings, and the Collective later spawned the Vision Festival, now in its 11th year, and one of the largest jazz festivals in the world that operates without major corporate funding.

Parker has led far too many dates to do a comprehensive list of his recordings, and too many of those are great to compile any kind of a “best of”. I’m taking this month and next to dig into four albums: a solo and a duet performance this month, a trio and a quartet in October.

1998’s Lifting the Sanctions is actually Parker’s third solo bass recording, the first two — Testimony (on Zero In) and Painter’s Autumn (released on cassette by Parker’s own label, Centering) — are both long out of print. Of his many recordings, I find that Parker’s overall music concept (which is really more about sound than music, per se) is demonstrated most completely by his solo work. While he may lack the technical precision of some other avant-gardists like Peter Kowald or Barry Guy, his playing packs an emotional wallop few can match. 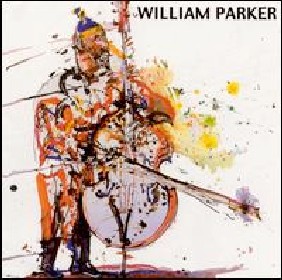 One of the hallmarks of Parker’s bass playing is his sonic exploration through the use of alternative techniques, several of which are described in the liner notes. One example: “Drum Technique: A percussive technique where I relate the bass to a trap drum set. Gstring is a ride cymbal, D-string is a snare drum or kalungu (African talking drum), Astring is a tom-tom, and the E-string is a gong or bass drum.” At times it sounds like Parker has an entire orchestra of color at his disposal. Interesting as that may be, the music on Lifting the Sanctions transcends technique…it tells stories, projects feelings, and describes ideas that couldn’t be related with words.

Lifting the Sanctions is extraordinarily diverse: at times energetic (“Macchu Picchu”), playful (“Rainbow Escaping”) idiosyncratically beautiful (“As a Flower”), terrifying (“Mary Waiting”), and hopeful (“Lifting the Sanctions”). The magnum opus on this recording is “Emory”, a dedication to Jimmy Garrison (bass player in John Coltrane’s classic quartet, and a former teacher of Parker’s). “Emory” is something of an assemblage of short musical phrases that Parker evolves glacially (often at the microtonal level), one into another, over the piece’s 25-minute length.

Lifting the Sanctions is not an easy listen, and it doesn’t make very good background music. However, those willing to give it their full attention will be rewarded with a fascinating journey through William Parker’s sonic universe.

On Piercing the Veil we find Parker in duet with Hamid Drake, one of the most celebrated drummers currently playing improvised music. Great friends and frequent collaborators, Parker and Drake have toured and recorded together on many occasions…that they would make a duet album together surprised no one, but thrilled many.

If Lifting the Sanctions shows Parker’s complex and innovative side, Piercing the Veil demonstrates that he also knows how to groove and have a good time. This is evident from the albums two opening tracks, which are worth the price of admission by themselves: “Black Cherry”, Parker holds down a funky ostinato that gives Drake a chance to attack the groove from every corner of his kit; and “Chatima”, an exhilarating solo vehicle for Parker with Drake in full support.

Piercing the Veil’s most disappointing aspect also happens to be it’s most interesting: it doesn’t feature much bass playing. Of the album’s nine tracks, Parker’s main axe only appears on four: the two previously mentioned, “Piercing the Veil” (an energetic arco workout) and the hard-grooving “Loom Song”. On the other tunes, Parker takes turns at various percussion and wind instruments, including hand drums, balafon (a kind of African marimba), bombard (a medieval predecessor to the oboe) and shakuhachi flute. Of these, the percussion-only pieces (“Heavenly Walk” and “Chaung Tzu’s Dream”) most clearly show Parker & Drake’s telepathic unity. Grooves are tight, and moments of jaw-dropping synchronicity fly by so often the music sounds as if it could be composed. Another standout of these is “Japeru”, with Drake on frame drum and Parker on Shakuhachi. Not only is it one of best recordings of a hand drum I’ve ever heard, it has a mesmerizing vibe that begs for the repeat function on your CD player.
To be continued…