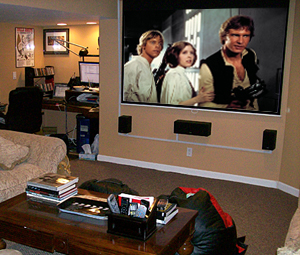 Okay, so on the surface, five thousand bucks sounds like a lot of cash.  But if you break it down over the course of a year, you’re actually only talking about a hundred bucks a week.  And if you’re willing to put aside that kind of cash for that whole year, then you too can have a home theater setup like Mark Wiener’s.

When I read about this one I was pretty well surprised.  He mostly paid for electronics and furnishings, doing most of the construction work between himself and his father in law, which was probably a good bonding experience for the duo.

But that five grand went a pretty long way, putting up a Toshiba DVD, VCR and HD DVD player (though that one probably doesn’t see much use any more), a Panasonic Blu-ray player and 720p projector, KLH speakers and a B-tech ninety inch screen, and plenty else.

With some careful planning, you too can put in a really awesome home theater setup and without breaking the bank to do it.  That makes it, especially these days, doubly sweet.