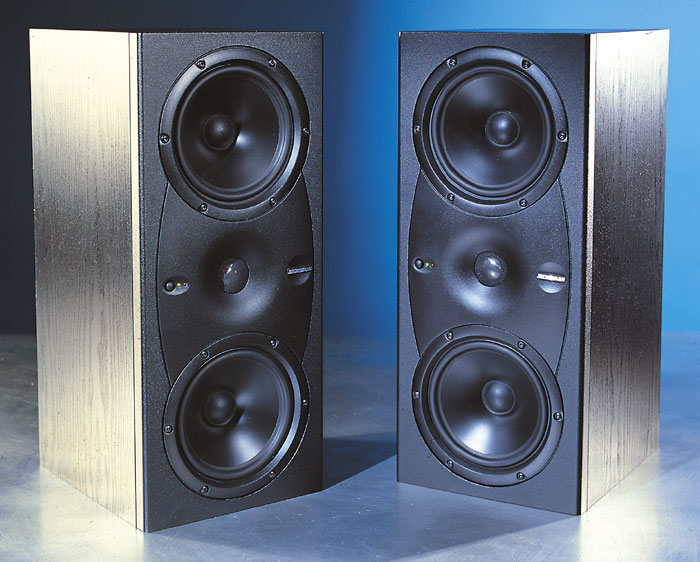 Mackie made quite a splash when they introduced their HR824 powered monitors. Still popular, the HR824 has been joined in the line by additional models — the smaller HRS624 and the, well, different HR626. The HR626 has the appearance of a home theater center channel monitor when laid on its longer side — though, at near 20×9 inches, it has some size advantage on the average center channel speaker. The other unique feature is the symmetry of two 6.7-inch woofers on either side of a 1-inch dome tweeter.

This component layout is used fairly rarely in the world of studio loudspeakers, but it does have its advantages. First, you get the bass response of larger components without making the cabinet wider (the spec being 42 Hz, aided by a rear-ported 6×9-inch passive radiator). This makes the cabinet ideal for mounting sideways on a console, where height and visibility are issues. Second, and more important to me, is that with this symmetry, the relationship between the tweets and woofs is maintained relative to your ear whether the monitors are laid horizontally or stood vertically. Thats a perennial studio problem — if you lay most nearfields on their side, the imaging is affected by which side you position the tweeter. Then, the monitoring sweet spot is typically very narrow, as the distance the highs and lows travel to reach your ear varies with your horizontal head position. With the HR626s, the bilateral symmetry (I did pay a little attention in biology class) makes for a much wider sweet spot. 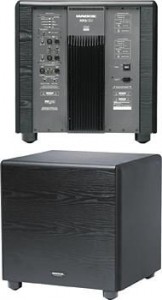 The HR line also includes a pair of subwoofers, and for this review Mackie provided the behemoth HRS150 along with five of the HR626s. The HRS150 is a 117-pound cube (roughly 24 inches a side) with a down-firing 15-inch driver matched with two passive 12-inch radiators inside. The sub includes bass management for a 2.1 system, including a continuously adjustable crossover that sweeps from 55 to 110 Hz (detented at 80 Hz). Optional settings on the HRS150 include a crossover bypass, a 110 Hz filter for use in LFE-only applications with lossy compression encoders, and a subsonic filter that rolls off at 15 Hz. Theres also a polarity reversal switch, gain control, and a remoteable bypass so your 2.1 system can switch rapidly back to 2.0. A separate input and output let you slave subs for use in a twin sub configuration. You can also add 10 dB of gain for mixing for Dolby Digital, assuming that you are using the sub for LFE only and arent monitoring through a decode processor that will add that gain for you.

For set up, the HR monitors are flexible, with RCA and XLR connectors for input on both the sub and 626s, with the 626s also sporting 1/4-inch TRS jacks. The 626s have internal circuitry to allow you to adapt them to their surroundings — including gain, an HF shelving EQ, and LF roll offs for adapting to room and position and to use with a sub.

But all that control would be for naught if the HR626s and HRS150 didnt sound good. And they do. The 626s get plenty loud for my tastes (a pair is rated at a maximum peak SPL of 118 dB at 1 meter; 100W of amplification is onboard for the woofers and 40W for the tweeter), but they also maintain their spectral balance at relatively moderate listening levels. The high end is crisp, clear, and flat. The low end is solid and tight, and the low-frequency extension is quite satisfying, especially for a nearfield. Imaging is focused and, as stated, the sweet spot is wide, making the HR626s particularly useful for surround work. 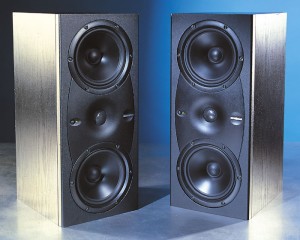 The low-frequency performance of the 626s is substantial enough that many engineers will likely opt to use them in surround mixing without bass management, with a sub just for LFE if required by the project. At the end of the mix, checking the results in a bass-managed system is still recommended, though you will have to use bass management prior to the HRS system for this application. I have gravitated to most often listening in a bass-managed mode to really feel assured that I know what is going on at the extreme low end. For such listening, the HRS150 provides all the answers. The extremely low-frequency performance is substantial. A lot of subs quit around 30 Hz, but the HRS150 is performing solidly at 20 Hz (Along with test signals, I have a pipe organ note on a recording that tests this quite effectively — you can feel the pressure subside in the room as the note fades when played back on a capable speaker, which the HRS150 is). The sub is fast and detailed (yes, there can be definition to signals below 80 Hz). It can play numbingly loud with a 950W rms amp providing 122 dB of max SPL (some subs have plenty of energy, but make a muddy mush of the signal — not the HRS150)

Separately, or as a package, the Mackie HR626 monitors and the HRS150 subwoofer are well engineered to fit into a professional surround mixing environment. Add external bass management as needed, add music, and enjoy.