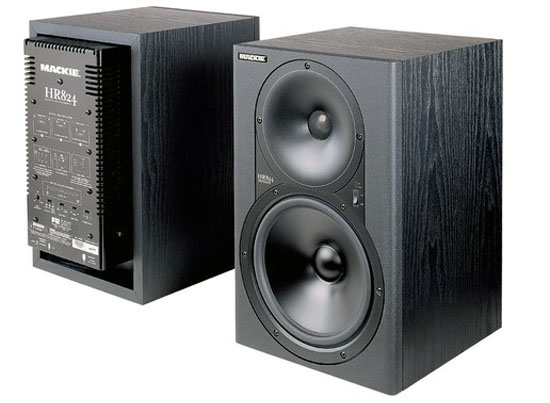 Ah, conventional wisdom. Is it to be trusted in something so personal as a studio monitor? I usually listen to the conventional wisdom with only one ear open and a show me attitude, but I was definitely curious when it came to the Mackie HR824 studio monitors. I guess I was just about the last person in the world to have a listen to the HR824s, but given that Id heard nothing but positives in the two or so years that theyd been on the market, I was anxious to finally give them a try in a surround situation. So I set five of them up for a Neil Young project (Live In Berlin  1984) that I was doing and we were off.

The Specs of HR824
The Mackie HR824 is a two-way biamplified monitor with a unique twist in that it also contains a 6- by 12-inch elliptical passive radiator to extend the low-frequency response. This passive radiator, which is composed of an aluminum honeycomb composite, is used in place of the traditional ports found on most bass reflex style cabinets. Because its located on the rear panel behind the power amp assembly, its easy to overlook and not to even realize that its there unless you read the manual. The low-frequency driver is an unusual (in size) 8.75-inch polypropylene cone powered by a 150-watt amplifier, while the tweeter is a 1-inch aluminum alloy dome mounted on a die-cast zinc exponential waveguide powered by a 100-watt amplifier. The crossover point is at 2 kHz at 24 dB per octave.

The handsome cabinet is made of 3/4-inch thick MDF with a 1-inch thick front baffle that has radiused edges to minimize diffraction and an internal H brace for increased cabinet stiffness. The cabinet is filled with open cell acoustical damping material to absorb internal reflections and measures 15 3/4 by 10 by 12 1/4 and weighs just a tad under 34 lbs. The manufacturer specifies that the HR824 has a wide free-field frequency response of 39 Hz to 20 kHz ±1.5 dB, with the extended low end due to the inclusion of the passive radiator.

The rear panel has an input sensitivity control as well as a number of frequency balance controls complete with some well-thought-out accompanying diagrams and explanations. This is really great in that the most important details are right there where you need them when you need them. Along with a low-frequency rolloff filter (37, 47, and 80 Hz) and a switchable high-frequency control (±2 dB at 10 kHz) is a control to compensate for placement (Acoustic Space) in reference to the nearest wall. Theres also a Power Mode switch that will enable the monitor to turn itself off after five minutes of silence and then powers up again upon sensing the presence of signal.

Inputs are on 1/4-inch phone plug and balanced XLR and they are on a downward-facing ledge on the rear panel so the monitor can easily flush mount against a wall.

The front panel has an On/Off rocker switch with a Power On LED. An overload indicator sits right above the On/Off LED. This OL blinks on the occasional transients and lights continuously if any protection circuitry is triggered. Speaking of protection circuitry, the HR824 has both limiters on each power amp plus thermal overload protection as well, and also has the standard magnetic shielding to prevent magnetic radiation from wreaking havoc on computer monitors and television screens.

The manual is very un-Mackie-like in that its a much more professional presentation than other manuals Ive seen from the company, with far less emphasis on being humorous (although this isnt gone completely, theres just less of it). And its pretty complete, with a good description of all controls and components and sections on troubleshooting and specific technical and wiring info. All in all, a good job on an item that more often than not takes for granted that the user already knows it all.

How Do They Sound?
I really hate to fall in with the conventional wisdom here because its soconventional, but you cant fight the truth. The HR824s are really pleasant to listen to and easy to learn and use. Frequency-wise, theyre pretty smooth with the highs being very distinct and, for want of a better term, transparent without being either harsh or out of balance. The mids are not as prominent as the de facto studio standard NS-10Ms, but neither are they deeply notched at the crossover point as are so many other two-ways on the market. The low frequencies do seem extended thanks to the passive radiator, which makes the box sound a lot bigger than it looks. They get plenty loud when you need it and still maintain the same response when theyre quiet. To put it another way, I trust these monitors and wouldnt ever complain if they were my only choice to mix on.

When used as rear monitors in a 5.1 environment, the placement has to be a little extra precise in that they do have a focused output, so you must be careful to get the right placement and distance, otherwise you will sacrifice either envelopment or imaging a little more than monitors with a wider dispersion.

So, in the end, the conventional wisdom on the HR824s was right on the money. They look good, sound great, and, at a $799 manufacturers suggested retail price, they wont break the bank. As an added bonus, the 824s are now THX pm3 approved. I suspect that these monitors will be seen in all types of professional listening situations for some time to come.