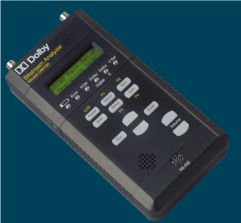 My first professional job in the industry was as a broadcast engineer, in what was, in many ways, a simpler time. The chief engineer whose job I inherited had served as something of a mentor to me. One of his tricks-of-the-trade was a simple audio tracking device — a pair of headphones fitted with alligator clips that allowed one to trace line level audio through a wiring system. The method was fast and provided direct feedback of audio presence and quality.

Then digital audio arrived on the scene. By the time it was common to route digital audio signals around a facility, I was employed in the recording studio world. The headphone method no longer sufficing for testing and tracking signals, a handheld serial digital analyzer became the tool of choice, still driving headphones with a decoded signal, but also providing metering and bitstream analysis — checking flag status and measuring parameters like sample rate.

Entering the 21st century, weve complicated matters further with direct digital broadcasting in surround. It is no longer sufficient to be able to track and test serial 2-channel PCM data streams, as the new broadcast standards include Dolby Digital data streams, and Dolby E — up to eight channels of Dolby data compressed digital audio in a video clocked stream — has been developed as an intermediate distribution and editing format.

Yet, the demand remains for a way to quickly monitor and test data streams at various points in a production chain. Indeed, the need for a portable test device is more critical than ever, matching the complexity and variety of signals under test.

Dolby has met these needs with their Model DM100 Bitstream Analyzer. About the thickness and width of the latest Grisham paperback, if a bit longer, the DM100 is a battery powered, portable test set that is simple to operate, yet has the depth necessary for sophisticated interaction with Dolby and AES3 datastreams. The DM100 can be used to monitor, and in some cases manipulate, Dolby Digital, Dolby E, and professional and consumer PCM serial data. XLR, BNC, and TOSLINK connectors allow interface with signals following the S/PDIF/IEC60958, AES3, AES3-ID, and optical electrical formats. Signals can be monitored with an internal speaker or via headphones, with data analysis shown on a two-line LCD. The DM100 can be used inside a signal path, monitoring without disrupting a signal.

For basic monitoring use, a signal can be plugged into the DM100 and, when set for Autodetect, it will decode the audio for audible monitoring (either downmixed or as individual pairs of audio when a multichannel signal is being decoded) and provide detailed information about the data stream such as data rate, number of channels, level metering, and so on. In its more sophisticated modes, the DM100 can analyze the complexities of Dolby Digital and Dolby E metadata. There is a great deal of depth to these formats.

Especially while in the infancy of their widespread use in broadcast, the benefit of being able to quickly test these signals at various stages of their paths cannot be overstated.

Parameters unique to these Dolby datastreams can be monitored, as well as the effects for dialnorm settings (with Dolby E signals) for control of average dialog level and dynamic range control settings. The DM100 can also be used to edit settings of AES or consumer PCM signals passing through the device, setting flags on the fly. Timestamps in Dolby Digital and imbedded timecode in Dolby E can be read and monitored, along with the timestamp data burst delay referenced to A/V sync (as per SMPTE 339M). The internal generators latency test mode can measure the delay inherent in audio equipment — which is valuable in keeping video and audio in sync, particularly when Dolby E signals are used in intermediate production stages.

Sometimes it isnt enough to merely monitor a signal, but signals of various types need to be generated to properly trace a problem or test a device. The DM100 Generator section can produce a variety of test signals in the various formats, with the ability to upload additional tests for user specific tasks. Settings and setups can also be saved in four user-preset memories. The test generation capability alone is worth the price of the unit for a multi-room facility, as will be the time saved in troubleshooting or system analysis.

The Dolby E, Dolby Digital (AC-3), and PCM test signals can be also be locked to an external video sync or the clock from the digital input. This capability, plus the ability to ensure proper clock frequency and video/clock/timing relationships, can help solve a sizable number of problems in a simple fashion.

The DM100 is provided in a convenient carrying case, with adapters to and from BNC and a wall wart power supply provided. The manual is easy to read and the laminated quick start guide is sufficient to provide info for routine chores. A serial cable is also provided, allowing computer logging/monitoring of select parameters and for uploading test configurations for the generator.

Save, perhaps, for the preference for a rechargeable battery pack, theres really nothing to complain about with the DM100 Bitstream Analyzer. The needs for the vast majority of the signal-flow testing in a modern TV or production plant are well satisfied by this device. The portability and flexibility of the DM100 are the keys to its strength. In a well-run facility, you likely wont use it every day, but in those crisis moments when a device like this is so incredibly useful, and for test and evaluation during installs, youll soon consider it indispensable.