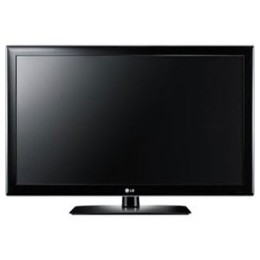 We wrap up a week of televisions by checking out a substantial piece of hardware from the folks out at LG. LG has brought us some good quality stuff in times past, so suggesting that they will again is hardly out of line. Will they succeed with the LG 55LK520? With this review, we’ll find out.

The LG 55LK520 is a fifty five inch 1080p LCD television with a 120 Hz refresh rate, Intelligent Sensor to automatically set your settings according to conditions in the room, Picture Wizard II to allow you to make those changes yourself to customize the picture to your liking, two ten watt speakers, three HDMI ports, a USB port, two component inputs, two composite inputs, an RF input, a PC input, and a headphone jack.

The sound on this one is a bit underwhelming, with a pair of ten watt speakers unaugmented by any kind of engineering, but the picture looks pretty nice indeed. It’s a pretty sizable picture–it just doesn’t get much bigger than fifty five inches, when you come right down to it, unless you go projector–and the increased refresh rate does help substantially. There are plenty of jacks for your old and new equipment, though this one won’t do streaming, which is a bit of a blow but there are plenty of set top boxes out there to make up for the lack.

And considering you can get this one out at Tiger Direct for $1149, you’ll be doing all right for such a large television.

It’s big and pretty, but the sound is a bit lacking, so if you’ve got some good quality home theater audio, you should do just fine with an LG 55LK520 in your home theater system.