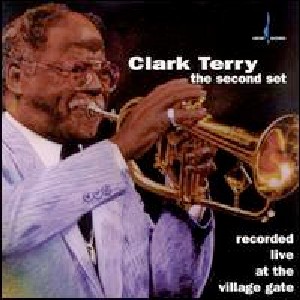 Summer is the time of year we seem to switch off certain parts of our brains. It doesn’t matter how high our cultural brows may be during the rest of the year…during the summer Stephanie Plum novels top bestseller lists, America tunes in to find out of it’s really “Got Talent”, and the internet goes abuzz over a movie called “Snakes on a Plane”. And why not? We’re on vacation, or at least enjoying ourselves outdoors more than usual, and as stimulating as “real” art can be, sometimes it’s just too much work.

I had in mind this month to review a bank of recordings from one of the most influential avant-garde jazz musicians alive today, someone whose albums have been spending a lot of time in my system over the past few months. But lo and behold, a record club I belong to started clearing out their entire remaining Chesky Records catalog for a mere two bucks each. I picked up three discs by trumpet & flugelhorn extraordinaire Clark Terry, and a bossa nova date by Brazilian singer/guitarist Rosa Passos and bassist Ron Carter. For less than a single Hamilton plus shipping, the sound of my summer changed instantly. Knotty? Complex? Challenging? Nope. Not even particularly innovative, by today’s standards. But some fine music to be sure, and the bottom line for summer listening: a whole lot of fun.

Live at the Village Gate

Clark Terry has been around a long, long time. He was a prominent member of both Count Basie and Duke Ellington’s bands, and has recorded over 300 albums with some of the most influential pioneers in jazz, including Ella Fitzgerald, Dizzy Gillespie, Billie Holiday, Thelonious Monk, Charles Mingus, and many others. Terry’s unique voice has been an inspiration to countless trumpet players, including young would-be giants Miles Davis and Quincy Jones. Live at the Village Gate was recorded in 1990 over a weekend-long run at the notable West Village venue, just a few weeks before his 70th birthday. If his chops had waned even slightly over his (at the time) five-decade spanning career, it doesn’t show at all here. The man is a monster on his instrument: blistering fast runs, bending notes all over the place, every note with a distinct sense of purpose, zestful joy, and unbridled swing. Jazz, possibly music in general, just doesn’t get any happier than this. 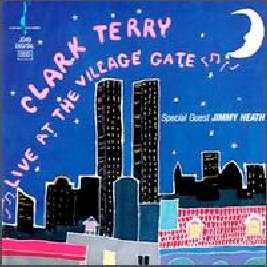 The tunes, all Clark Terry originals, hold their own well enough to be standards, but are brought to life by a cooking band (in particular Jimmy Heath on tenor and soprano sax) and a crowd who’s clearly into it. The set boasts a good diversity of tempi, from the upbeat opener “Top & Bottom” to a ballad, “Sheba”. A couple of audience sing-alongs (“Keep, Keep, Keep on Keepin’ On” and “Hey Mr. Mumbles”), a Latin number (“Silly Samba”, on which Paquito D’Rivera guests), and a delicate yet fast-paced duet with Terry and drummer Kenny Washington (“Brushes and Brass”) keep things fun. This isn’t music that takes a lot of time to understand or enjoy, but holds up well to repeated listening.

The Second Set – Recorded Live at the Village Gate

The Second Set was culled from the same DAT tapes as Live at the Village Gate above. The performance is similarly brilliant…basically this is for people who enjoyed the first Village Gate album so much they wished it was a double. The band opens with a warmup number (“One Foot in the Gutter”) and proceeds to turn up the tempo (and the heat) with “Opus Ocean”. A ballad, a hard-bop workout, a blues, and a Latin number later and Terry closes the set with “Funky Mama”, during which the audience is encouraged to sing along and make up their own lyrics.

Interesting audiophile factoid: both albums were recorded the same weekend by digital mastering guru Bob Katz, but were released one year apart. According to a letter Katz wrote to Stereophile magazine1, during that year the quality of Chesky Records’ digital processing gear “had improved so much that the second recording sounds warmer, more open, clearer, and more dynamic”. I tend to agree, in particular with the “warmer” and “clearer” bits. The difference is subtle, but worth listening for if you’ve ever been curious about the sonic impact digital mastering can have on a recording.

One on One puts C.T. in a series of duos with 14 different pianists. Tunes were chosen by the piano players, who pay tribute to the great innovators of jazz piano with their song selection. For example, Don Friedman performs a homage to Thelonious Monk with the Monk standard, “Blue Monk”, while Eric Lewis remembers Art Tatum (known more for the speed and complexity of his piano playing than his compositions) by playing George & Ira Gershwin’s “Liza (All the Clouds’ll Roll Away)”, a tune Tatum helped popularize. 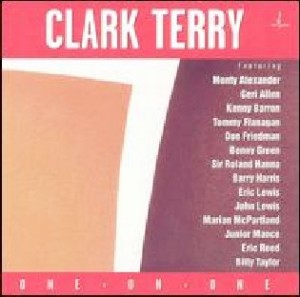 First off, this disc swings mightily, everyone performs with enough verve and bounce to make toes tap whenever it’s played. Terry’s playing lacks none of the effusive joy of the live recordings mentioned above, this is a guy who simply refuses to be uninspiring. Which brings me to my second point: despite the prodigious talent on the 88s present on this recording (actually the 97s in this case, as the piano used for the session was a Bosendorfer Model 290 Imperial Grand), this is absolutely a Clark Terry record. He’s generous with the spotlight, but his own playing is so melodically inventive and sings with such a warm, human voice he can’t help but steal the show whenever he puts his horn to his lips. The pianists for the most part take on an accompanist role, and in many cases stay true to the stride and ragtime styles of the players they honor.

Recording quality is typical Chesky scintillating detail. A bit too much detail in some cases (it sounds like Tommy Flanagan may have been getting over a cold), but instrumental timbres are about as lifelike as you’ll find on record. The session took place in St. Peter’s Episcopal Church in NYC, which has a dramatic natural reverb. It’s beautiful, but the ambience of the room, combined with the lush warmth of the Bosendorfer, seems a bit of a stylistic mismatch for the material (give me a loose & sloppy upright in a small club any day!), but that’s a nitpick. This set is easy to enjoy and is probably unlike most anything already in your collection.

Rosa Passos has been recording actively in her native Brazil for over ten years. Although she hasn’t caught on with mainstream music fans back home, much of Brazil’s jazz community considers her the premier torch-bearer of the bossa nova movement. Ron Carter is a legend of jazz bass, and has had a profound influence on generations of younger bassists. Having played on over 2000 albums, it may be easier to list the artists he hasn’t performed with than those he has. I’m not sure exactly whose idea it was to give these two a double bill, but it was brilliant and I’m grateful. 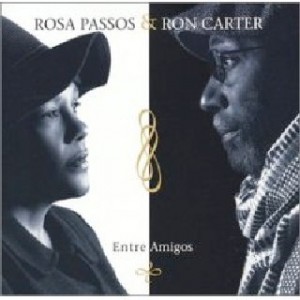 One of Carter’s strengths is in making his band mates sound good, so playing in a group like this, in support of a singer, is natural fit for him. Not that Passos needs much help sounding good; her sweet, yet casually detached voice immediately brings to mind Astrud Gilberto, but she maintains her individuality and brings a welcome freshness to such bossa chestnuts as “Desafinado”, “O Grande Amor”, and “Garota de Ipanema” (“The Girl from Ipanema”, but sung here in its original Portuguese). Some of the most successful tunes are those that get away from traditional instrumentation, in particular “Por Causa de Você” (a gorgeous vocal/bass duet), “A Primeira Vez” (solo Passos, accompanying herself on guitar), and “Eu Sei Que Vou Te Amar”, on which Billy Drewes’ clarinet sounds uncannily like a flute.

Passos’ delicate, bell-like vocals combined with Carter’s deep, woody bass tone are perfect company on a warm summer night. Bossa nova is great for making you feel, no matter where you really are, that you’re on vacation: laying on a hammock in the shade of a palm tree with a big, fancy drink in one hand with a little umbrella in it. This album has that, but like any true bossa, there’s an element of melancholy to it as well. It reminds us that summer, like vacation, doesn’t last forever…but this should only serve to heighten our awareness, and our gratitude, for the moment we’re in right now.