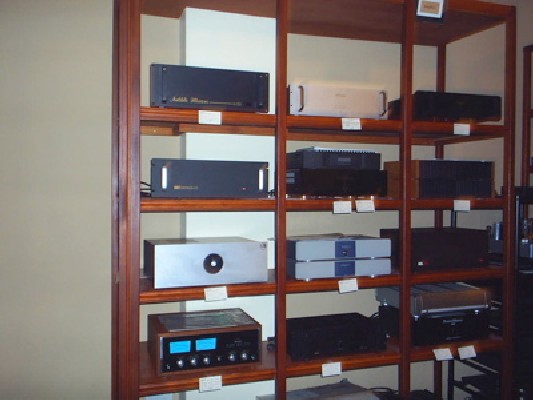 Last summer after my initial “rediscovery” of audio, I found several forums that flamed my enthusiasm. In the course of postings on one such forum, I decided to start a thread involving opening an “Audio Only” store. The replies were quite fascinating, as many had spent some time thinking over what type of equipment/brands they would carry. A few common threads seem to carry throughout the serious postings, one being the need for additional income to cover the costs of competing against the big boxes.

With that introduction I give you my business plan for “Pure Audio”.

A medium to large university town that will allow for fresh clients each year. As new freshman enter the university they immediately create a few to several thousand new customers to “initiate” into the world of audio beyond mp3 players. Plus, the demographics I bet would show that college educated people are more into home audio. The shop would be near restaurants, college bars, and those quirky college retailers that every campus seems to attract. In being close to campus and restaurants, “Pure Audio” would have a nice flow of walking traffic passing in front of the display windows every day. 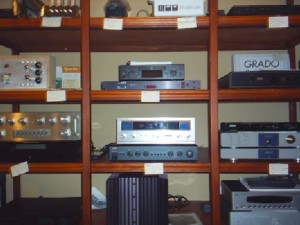 Well lighted, but no fluorescents, as they inspire the Best Buy mentality. Front entry would have displays of equipment over the years. This would open up into a gallery area displaying used and consigned equipment on wood trim racks with mirrored backs. This would allow for easy viewing of the backside connections. Between the racks would be four glass sliding doors leading into the listening rooms. The first two rooms would be reserved for the popular main lines of equipment. Once again, the same type of racks as in the gallery with one change, that being between each piece of equipment, space for a two-level display carrier showing a fact sheet in front, and a review (if available) behind.

The third room would be the high end/special demo room. The design would include acoustic panels, draperies, and other sound tweaks. Most of the equipment would be from smaller North American and European companies and would include tube SET equipment, along with high efficiency speakers and turntables. It is important to educate the audio buyers in the realms of the next level of audio equipment.

Each of the rooms would have a seating area along with a remote control switching system for instant comparison. Once a final selection is made from rooms I and 2, the equipment can then be paired into a switching-free setup to best hear how the combination sounds.

One of the most difficult decisions is knowing what audio lines to carry. The local market will do much to determine what manufacturers to carry. One caveat is to make sure that one well-known line is available to bring people in the door. I’m sure many of can guess as to a couple of names that would work well in this case. A second critical component is not to carry too many lines. The KISS philosophy is essential. Carry lines that are unique in features/sound, as overlapping leads to confusion and the inability to make a decision. Three to four lines in each category are more than plenty. 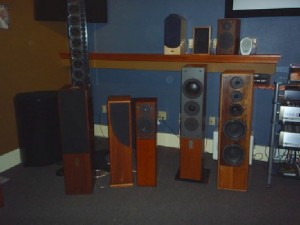 Inventory control is critical, I know of one dealer that keeps only one or two of each item boxed. They offer to pay the sales tax if the customer is willing to wait the few days until the item arrives from the manufacturer/ wholesaler. This has worked quite well for them.

Most of the independent shops have all but eschewed typical print advertising, instead concentrating on word of mouth and maybe sponsoring an hour on the radio of a specific show. With Pure Audio the best advertising is the customer themselves. All equipment purchasers get a Pure Audio t-shirt (cheap advertising). Secondly, sponsor beginning of year dorm activity to introduce incoming students with music. Try to be sponsor of the hot campus newspaper comic strip (most campuses have one). Provide free (with deposit) stereo system for fundraising campus groups and private charitable activities. Having a good relationship with the community is essential and these proposals are quite inexpensive.

Hold a beginning of May blow out sale emphasizing one-of-a-kinds and clearance models. The idea is to clear out inventory for summer slow season. Make sure there are some true killer bargains that the buyer will brag about. Hold one or two of these items back and bring them out at different times to keep the traffic flow up over the entire sale period.

Picking the right sales staff may be the most difficult part, as the whole venture depends on getting individuals who have both product passion and the drive to ask for the sale. Having spent way too many years in retail before becoming a teacher has given me some insight into what works best. Straight commission is a no-no, as it lends itself to less than desirable sales practices. Flat salary induces laziness. I believe in the hourly wage, plus the store sales bonus based upon a percentage of the gross store income for the month. By using this method, the staff is not only motivated, but also willing to work together to ensure that the business is successful. 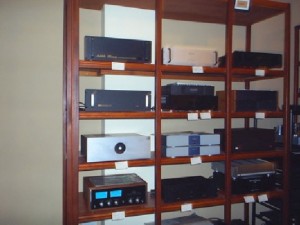 Returns only for instore exchange unless a 15% restocking fee is accepted. Setup in-home trials for permanent residents (no dorm, frat house, etc.). Six month upgrade minus restocking fee of 5% for each month owned. Of course, none of this applies to consigned equipment, sold is sold.

I’m sure I’ve missed many areas, but hopefully have included enough as to spur some thought and hopefully, some commentary as well. My thanks to “LadyAudio” for her permission to post some of her ideas and Echo Audio for the photos.

Tags: Audio Shop, business, Creative, Do It Yourself, shop