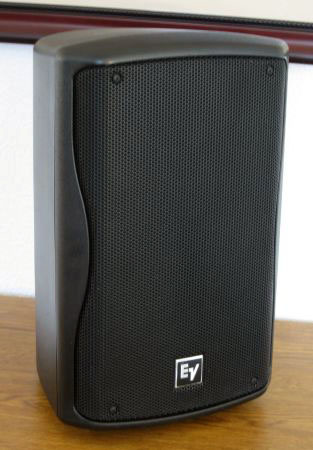 The E-V ZXA1-90 is a small (17.88 x 11.12 x 10.38 inches), amplified, two-way loudspeaker built for portable sound reinforcement applications, which utilizes the EV8L 8-inch woofer and the DH2005 1-inch exit compression driver, the latter of which is a titanium diaphragm tweeter coupled with a rotatable 90 x 50 degree waveguide.

The ZXA1-90 is powered by a 800W 2-channel amplifier; crossover frequency is at 1.8 kHz. A user-selectable 100 Hz high-pass filter allows for use with a subwoofer (or ideal when using at a monitor wedge broadcasting primarily midrange instruments, vocals, etc.).

The ZXA1-90 offers an XLR microphone input with independent gain control and line-level input via an XLR/TRS combo jack. A line-level XLR output (microphone and line level summed together) is also included, which is ideal when daisy-chaining more ZXA1-90s, other speakers, or a subwoofer together. A second rotary pot (in addition to the mic gain control) allows independent adjustment of master volume. Two LEDs indicate power on and transducer protection limiter on statuses, respectively.

The ZXA1-90’s injection-molded cabinetry is made of high-impact polystyrene, which makes the package light in comparison to similar wooden-closed products (each ZXA1-90 weighs 19 lbs.). A well-positioned handle resides at the top of the rear panel, making two ZXA1-90s easy to carry.

Electro-Voice ZXA1-90 In Use

At first glance, primarily because of their small size and weight, it’s easy to underestimate the performance potential of the ZXA1-90; upon carrying a pair into a live club gig (approximately a 250-person-capacity venue with a dual 18-inch powered sub anchored house PA), where they would serve as stage monitors/wedges, the musicians smiled — and actually chuckled — at the sight of their diminutive stature. 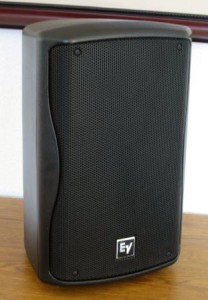 But upon powering them up and checking vocal and guitar monitor levels through the ZXA1-90 pair provided for this review, the chuckling ceased. The smiles remained, though, as we all were surprised at their clean, loud, low-/no-noise performance and surprising mid-/low-end fullness, especially evident in chunky rhythm guitar. I found the ZXA1-90 pair to be great stage monitors for club dates. No question, the ZXA1-90’s 800W amp really delivers.

Later at another gig — a coffeeshop-style date featuring electric piano and vocal via the ZXA1-90 pair — I didn’t even use a mixer; we simply put the vocal mic into the first ZXA1-90’s mic input, and line-in from the keyboard, then daisy-chained the second ZXA1-90 via XLR (we also used a third-party powered speaker for a stage monitor). This environment proved to be another ideal setting for these speakers. With the same musicians, but at a small outside event, we used a stick-style PA as a main (Fishman SoloAmp), with the two ZXA1-90s serving again as wedges. Again, the E-Vs served very well as monitor speakers, allowing two different musician-tweaked levels per cabinet and comfort for all — audience and performers. 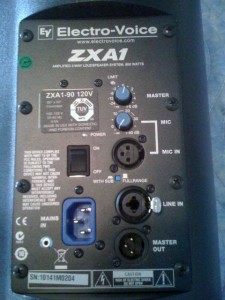 For a final gig, I used the ZXA1-90 pair as mains, paired with a powered subwoofer (Cerwin-Vega CVA-118). With their high-pass filter utilized, the E-Vs held their own, delivering two hours of high-volume rock (consistently over 100 dBa SPL at FOH position) without a hitch.

Two other qualities of this ZXA1-90 pair specifically struck me. Having used numerous small powered PA speakers over the past decade, the first is how user-friendly they are, from the intuitive rear panel, to their easy-to-pack size and weight, to their performance-based flexibility to fit numerous gigs. And two, their polystyrene enclosures — which I normally dislike because of a tendency to easily scratch in even careful, normal use — seemed to be far harder to mar than most comparable speakers. Of course, they will scratch, but not nearly as easy as other enclosures I’ve used.

If you’re in need for a truly portable, clean, and flexible PA speaker, I don’t think you’ll go wrong with a pair of these cute little powerhouses. At $499 street, they’re worth every dime and should serve any jack-of-all-trade gigging purposes quite well. 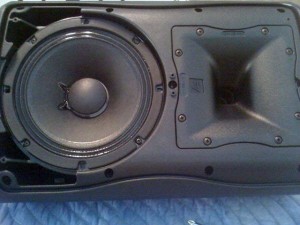