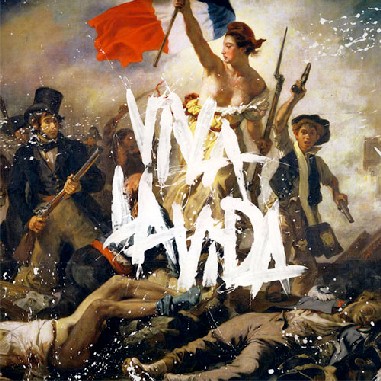 For the record, I did not set out to write a review of Coldplay’s latest album. Guys in their late forties who are fans of classic sixties and seventies rock, jazz and classical music cannot possibly be the target audience of Capitol Records. And yet, here I am, sucked into the vortex.

One of my children bought the CD, and was playing it on the main rig; the first track (an instrumental: Life In Technicolor) grabbed my attention. I listened through the CD and decided that there was enough to the album to justify investing in the vinyl, which I did. It was the right thing to do.

Coldplay is not a flash in the pan. The band has been active and very popular for the past decade. Nonetheless, this album represents at least a half-step away from its previous work. The dark side of the album (Cemeteries of London, Lost!, Death and All His Friends and even the title track) is thematically reminiscent of My Chemical Romance’s The Black Parade, though the nature of the music is distinctly different. The Coldplay album is—despite the outwardly gloomy appearance—a life-affirming work…the songs that touch on death (Cemeteries of London, 42, Viva la Vida, Death and All His Friends) contain an underlying theme of redemption, while the other songs on the album that don’t necessarily focus on the concept of death or the dead (Life in Technicolor (op. cit.), Lovers in Japan/Reign of Love, Violet Hill, Strawberry Swing) are genuine pop tunes, whether driving ahead or simply presenting themselves. Throughout the album there is a sense of craftsmanship, of songs that are written with some thought. The music itself is more than solid. There is a reason for which Coldplay is popular and well-reviewed. I reserve particular praise for the title cut. The lyrics are thoughtful and sentimental, the tune is catchy and the instrumentation is excellent.

Viva la Vida is produced, inter alia, by Brian Eno (who is also credited with “sonic landscapes”), and his involvement is not subtle, to the benefit of the album. “Mastering” is by Bob Ludwig, though it is unclear whether this applies to the LP or the CD; my gut (and my ears) tell me that this is a digital master that has been produced on vinyl.

The packaging of the vinyl is very nice indeed; you will feel you’ve gotten your money’s worth. The album cover is a gatefold, with a matte finish, featuring a reproduction of Eugène Delacroix’s painting of Liberty Leading the People. I’m not entirely sure why…it gives a kind of “Les Mis” feel to the artwork, and it doesn’t particularly mate with the music…but never mind. The gatefold contains a glossy booklet which I expected would include lyrics, but instead simply presents credits and artwork related to the various songs. In a particularly nice touch, which I wish more labels would emulate, a CD of the album is enclosed as well. Typically I prefer the vinyl sound, and use the CD in the car, but in this case I don’t hear much difference between the two. I also experienced occasional right channel distortion on my vinyl copy of the album, as well as more ticks and pops than I would have preferred. The vinyl itself is enclosed in a heavy-stock printed inner sleeve. I would have preferred a simpler plastic-lined innersleeve.

This is an encouraging album…the artists are entirely “modern”, the production is of very high quality, and the packaging of the album—at least in its vinyl manifestation—is excellent. For those of you who are convinced that 1980 brought with it the end of good music as we know it, this one is well worth a listen. Borrow your kid’s CD or iPod…you have nothing to lose but your preconceptions.