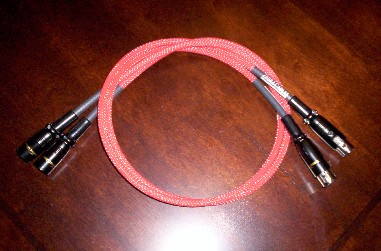 I recently purchased a Krell KAV 400xi integrated amplifier and had for the first time the opportunity to utilize a set of balanced interconnects to run between my Krell and Primare D30.2 CD player. Having been pleased with the performance of my Zebra SP14 DBI speaker cables I decided to try a pair of Zebra Cables XLR interconnects. So shot off an e-mail to Scott Burns the proprietor of Zebra Cables, he promised to make me a set of interconnects using Belden OFC wire and Vampire connectors and send them to me ASAP. Within a few days I received the XLR interconnects and upon opening the package I was pleased to find the well made pair of cables nicely packaged for safe shipment.

All Listening for ths review took place using my Krell KAV 400xi integrated amplifier and a Primare D30.2 CD Player. I am presently using unbalanced Discovery Essence interconnects and Discovery Essential speaker cables. The speakers of choice were either a pair of ProAc Tablette Reference Eight Signature Monitors which were mounted on their Target lead and sand filled speaker stands or Eficion Ficion F200 speakers mounted on their factory stands. I set up both pairs of speakers equidistant to the listening position and toed in slightly, 16 inches from the sidewalls and 48 inches from the rear wall for the duration of my listening sessions in my 18’ X 15’ X 7.5’ listening room.

Scott had suggested that the appropriate cable break in time would be in the neighborhood of 70-80 hours. I installed the cables between my Primare D30.2 and the Krell KAV400xi integrated and let them simmer for a couple of hours playing background music through my system. Right out of the box they were a tad bright but not altogether unpleasant to listen to. After several days they opened up slightly and began to sound more coherent. Within just a couple of weeks the sound became more organic, warm and focused.

First up I placed Diana Kralls jazz CD Love Scenes into the CD Player and played track 2 “Peel Me a Grape” This CD is an intimate recording, just Krall on piano Russsell Malone on guitar and Christian McBride on bass. This type of music is where the differences really became apparent between the Discovery Essence interconnects and the Zebra Cables XLRs. The Zebras were simply no match for the Essential interconnects Krall’s voice lost some of the sensuality and presence. McBride’s bass although full and musical was less intimate sounding. For instance on track 7 “I Don’t Stand a Ghost Of a Chance With You” is a track where Krall is accompanied only by Russell Malone on guitar. Malone’s guitar was not quite as involving and immediate. The plucked notes and chord strums were there but had less presence than the same track sounded when using the Discovery Essential interconnects.

This first comparison is really unfair because the Discovery Essential interconnects retail for $800.00 for a one meter pair and the Zebras Cables XLRs are $75.00 factory direct for a one meter pair. But it did show that the Zebra Cables XLRs were a quality product worthy of being used in a budget high end system. I decided to be fair I should borrow a pair of Kimber Kables PBJ balanced interconnects from a friend to compare with the Zebra Cables XLRs. This is a much more realistic scenario since the Kimber Kables PBJ XLRs retail for $108 for a one meter pair. Both cables at this general price point sound very good for the money. Whether you would prefer one over the other would truly be matter of system matching which I will explain further.

I put the Norah Jones CD Come Away With Me in the Primare and played track number 1 “I Don’t Know Why”. The Zebras did a remarkable job of articulating the fine details of Jone’s voice and her performance on the piano. The bass, guitar and drums were presented in a smooth coherent manner that is usually not found at this price point. I noticed that in particular the acoustic guitar was rendered in a most realistic manner. When I played the “Painter Song” track number 10 from the same disc, the guitarist seemed to be sitting right in front of me. In contrast the Kimber PBJs sounded bigger and rounder on the bottom end, the highs were slightly less pronounced. Both cables sounded similar in the midrange but the PBJs had a slightly thicker mid-bass. The overall impression is that the Zebras were more detailed and the Kimbers were more
laid-back.

Next, I played a track 1 “In The Crease” off of the Branford Marsalis Grammy Winning CD Contemporary Jazz. The award winning jazz quartet consists of Branford Marsalis on saxophone, Joey Calderazzo on piano, Jeff Watts on drums and Eric Revis on bass. Those familiar with the Branford Marsalis Quartet will appreciate the tight melodic and slightly edgy music they are famous for. These musicians are so familiar with one-another that their improvisation never sounds disjointed, unless it is supposed to. Their up tempo style is fun and refreshing with just enough traditional syncopation to keep the jazz purist from being alienated by the music. While both sets of cables rendered a good presentation of the performance, the Zebra XLRs sounded closer to being there. Marsalis’ sax sounded brash and bold, closer to the way he sounded in the concert I attended about a month ago.

Although no stereo system will duplicate the sound of live music in totality, especially the dynamic swings, the essence of the live music can be distilled into a satisfactory representation of the real thing. That is where the differences became apparent between the Kimber PBJs and the Zebra XLRs. I felt a little closer to the performance when Zebras were in the system, especially the way the cymbals shimmered and floated in the soundstage. Additionally, the sound of the drum stick impacting the head of the snare drum was more dynamic and clean. While the lower bass was not duplicated quite as powerfully as it was with the Kimber PBJs, it was tighter with less bloat. The piano notes were slightly clearer, lacking some of the haze that was present while listening through the PBJs.

While both the Kimber Kable PBJs and Zebra Cables XLRs are good cables, well constructed and great sounding for the money, I preferred the Zebra Cables XLRs overall. With a neutral sounding system they will provide a slightly clearer and more satisfying presentation of the recording. The only caveat I have would be that if you have a bright sounding front end, you might prefer the more laid back sound of the Kimber PBJs. Since both my Primare D30.2 and Krell KAV 400xi are fairly well balanced and neutral I will give the nod to the Zebra Cables XLRs for use in my system.