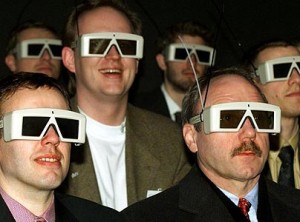 An unusual development comes our way following an analysis by The Wrap that suggests that 3D movies in theaters are selling better than expected, and that 2D movies are going the way of the dodo…in theaters.

Will this be a blessing or a curse for theaters?  That’s the question left to answer.

See, here’s the thing–Piranha 3D sold fully 95% of its tickets in 3D.  Otherwise disastrous releases like Cats and Dogs: The Revenge of Kitty Galore and Step Up 3D got big boosts with 3D sales.

But here’s the kicker–Toy Story 3 made fully a thousand bucks more per 2D screen than 3D screen, and considering theaters might charge an extra five bucks on a 3D show, that means a whole lot of people went to see Toy Story 3 in 2D.

So what that means is, despite the fact that 2D is more profitable, what people want to see, even, 3D makes money. Lots of money.  And that may well be the move of the future.  If you want to see movies in 2D, the home theater is where you’ll do it.  The theater, meanwhile, we’ll go largely the way of 3D in pursuit of bigger bank.  But will people go to the theaters and take on the 3D?  That remains to be seen. But considering how many more people bought tickets to Toy Story 3 in 2D, that suggests plenty of people who want 2D.