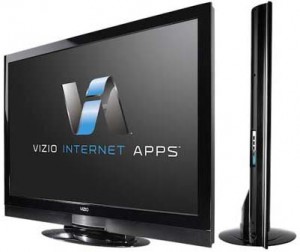 Today we look at a surprisingly substantial LED television–the Vizio XVT473SV. We’ve been looking at them all week so far, and this one won’t prove to be an exception. Though far from perfect, it’ll still offer up a package that’s worth considering, if you’re in the market for a new television.

The Vizio XVT473SV is a forty seven inch 1080p LED television that offers two hundred and forty hertz operating to reduce blurring in high-speed images, a collection of Vizio-specific internet applications and built-in Wi-Fi to make connecting to those internet applications easier, smart dimming systems to improve picture quality, two fifteen watt speakers backed up by SRS TruVolume (to keep everything at a consistent volume level) and SRS TruSurround (a synthetic surround sound system), a customized Bluetooth remote (with QWERTY keyboard built in!), five HDMI ports, one component input, one composite input, one RF input, one PC input, one Ethernet jack (in case you don’t have a Wi-Fi router), stereo audio output and three USB ports.

The picture is a little on the lower end of what you’d expect from 1080p LCD, but not out of line, and the sound quality does a surprising job here–having SRS TruSurround, I’ve found previously, really does help even against lower than optimal wattages. And while I’m never very happy about a television that can’t be bothered to offer up support for older hardware in the same proportions that it offers it for newer, there will be plenty of support for the newer stuff.

And the price, I think, is a little out of line for what you get–sure, a forty seven inch television is pretty substantial, but the folks out at Amazon want thirteen hundred bucks for this one, and that’s pretty hefty no matter how you look at it. Sure, it’s a nice television, but I’ve seen better for less.

So you may want to pass by the Vizio XVT473SV, because you can do better, but you won’t exactly be selling yourself short if you want to go this route.