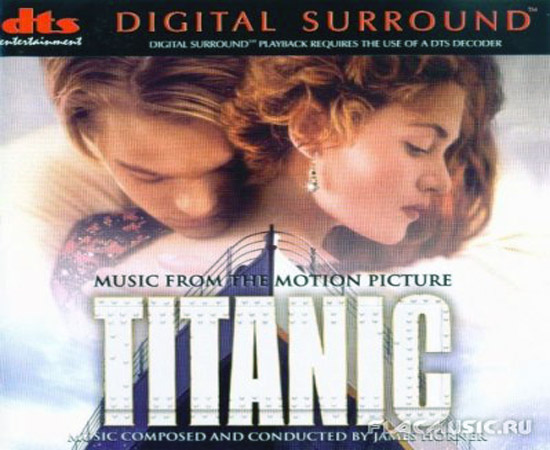 Sony Classical has released a new edition of the Titanic Soundtrack album. The new version is a Hybrid Super Audio CD which features a 5.1 Surround Sound mix of the music on the album as well as SACD Stereo and CD Stereo tracks.

High Fidelity Review readers will recall that the Titanic Soundtrack was originally released as a Single Layer Stereo SACD disc (Sony Classical/Sony Music Soundtrax SS 63213) in the early days of the Super Audio CD format. This version of the album has been out of print in anticipation of the SACD Surround Sound edition which appears this week after appearing in Sony Music’s SACD Catalogs for a very long time.

As with the original SACD edition, the Titanic Soundtrack features 15 tracks composed by James Horner who also produced the album. Included among the selections on the album is “My Heart Will Go On”, the Love Theme from Titanic as performed by Celine Dion.

The 5.1 Surround Sound Mix
The album’s 5.1 Surround Sound mix has good fidelity but is very subtle with most of the music and instrumentation appearing in the front channels. The surround channels are primarily used for ambience. This is even true on the track by Celine Dion which features the singer’s vocals in the Center Channel.

A Different Approach
If you want an interesting contrast to this mix, I’d suggest checking Celine Dion’s earlier Super Audio CD edition of All The Way: A Decade of Song (Epic/550 Music ES 63760). Track 8 on this SACD also features “My Heart Will Go On” but with a totally different Surround Sound Mix done by Humberto Gatica. Rather than being ambient in nature, Gatica’s approach to the song is immersive with background singers and some guitar and percussion appearing in the Surround Channels to give the song a panoramic take rather than an ambient one.

Availability
The new Surround Sound Super Audio CD of the Titanic Soundtrack is available at Best Buy stores as well as from web sites that carry SACDs including Acoustic Sounds, Elusive Disc and Music Direct. Since the disc is packaged in a standard CD case with Sony Music’s SACD sticker, you will want to check the standard CD racks as well as the audiophile/SACD racks as the new edition is likely to be mixed in with the regular CDs in many stores.

Next Up on SACD
I’m told that work is continuing on several other long-awaited Super Audio CD releases from Sony Music. The next Surround Sound SACD anticipated for release by Sony Music is Dangerously In Love by Beyonce Knowles (Columbia CH 86386). It has a preliminary release date on Hybrid SACD Surround Sound disc of April 6, 2004.