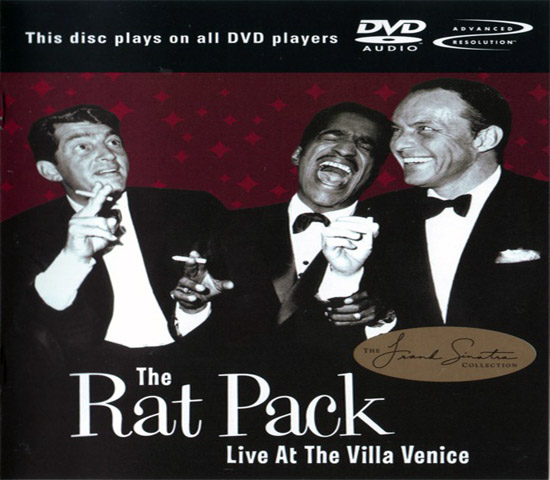 After the overwhelming success of Frank Sinatra’s ‘Sinatra at the Sands’ DVD-Audio disc, Warner’s Reprise label has quickly followed up with a recording that showcases all the members of the legendary 1960’s Rat Pack, Sammy Davis Jr., Dean Martin and Frank Sinatra at their best in a 1962 fundraising cabaret performance captured at The Villa Venice nightclub, located in the outskirts of Chicago.

Both discs are linked via Frank Sinatra, but are also closely related from an historical perspective. I did at first think ol’ blue eyes had included a plug for the ‘Sinatra at the Sands’ title as he mentions his forthcoming “new” album with the Count Basie Orchestra, but that performance was actually recorded four years later in 1966.

The performances on ‘The Rat Pack Live at The Villa Venice’ were recorded during the nights of November 26th to December 2nd 1962 and are brought to us here by the same team as the aforementioned Sinatra DVD-Audio title, mixing engineers (for the surround and stereo versions) Elliot Mazer and Diana Reid Haig together with co-producer Robin Hurley.

The disc begins with a set by Dean Martin, and it’s superb performance. The man’s charisma shines through, as does his relaxed, confident approach to the music and the humorous way in which proceedings are conducted. The opening track – following the initial fanfare and introduction – a medley of ‘Drink to Me Only With Thine Eyes’, ‘When You’re Smiling’ and ‘The Lady is a Tamp’ really encapsulates this approach, the re-written (ad lib) lyrics are enough to make anyone smile.

Frank Sinatra is the next to perform and the pace is immediately stepped up, but after Martin, Sinatra’s delivery is so effortless that it could almost be categorised as lazy, that is, until he really let’s rip, during the climax of ‘Chicago’ for example. Unlike the Martin set, Sinatra’s solo contribution is unquestionably more conventional, there seems to be less interaction between him and the audience. Although admittedly this impression is not backed up by any visual cues, but one does detect less audience reaction in the way of laughter and general murmurings.

The focus on humour immediately returns when Sammy Davis Jr. takes the stage – he introduces himself with “Hello, I’m Johnny Mathis” and is heckled by Martin and Sinatra throughout ‘She’s Funny That Way’ and ‘Hey There’. Listen out for what would now be considered inappropriate jibes and remember before writing your letters of complaint that they were taken in good spirit at the time by those concerned. Davis Jr. shares the presentation charisma of Martin, but his voice has an added tenderness and to be brutally honest, he vocally out-performs both Martin and Sinatra on this recording, impressing with both the range and power of his voice.

In pairs and as a trio during the sequences that follow, Davis Jr., Martin and Sinatra are hilarious, a personal highlight being the movie Frank Sinatra pitches to Dean Martin, which he quickly points out won’t include “him” (Davis Jr.). You might have heard the songs on this disc one thousand times before and perhaps be ambivalent as a result, but the banter between the artists alone makes this disc a worthy addition for any collection. Sinatra: “Sing something with rhythm in it.” Martin: “Rhythm? I’m catholic!”

‘Birth of the Blues’ is the final song according to the disc’s artwork – both on-screen and in the accompanying booklet – but let the track run on after its conclusion and following a brief break one will find a hidden extra; Frank Sinatra sings ‘One for My Baby (and One for the Road)’

As the performances were recorded on different nights the fidelity does vary a little from track to track, but even the worst of them could be considered exceptional for what is after all, a forty-four year old live recording. The biggest difference between songs can be heard in the vocals, there are times when they are just a tad stifled and distant – they sound “old”, for want of a better word – but this never really detracts from the performance and I want to stress that this is only a minor issue, the tonality of each voice shines through and the diction is always easily discernable. The orchestra is also conveyed with surprising clarity – the horns can be a tad raucous and thin at times, but not alarmingly so – and there is a fair amount of deep bass in the mix, including the occasional very low frequency thump caused by careless footfalls.

Given that these are live performances, thankfully there are precious few distractions due to audience noise, but when they do surface they’re not the usual coughs and sneezes but oddities like the sound of clinking crockery, heard midway through Sinatra’s ‘When Your Love Has Gone’.

As both the stereo and surround versions stem from the same multi-track analogue tapes, there is little between the two in terms of fidelity, although a direct comparison is complicated by the presentation differences of the multi-channel mix. The DVD-Audio stereo track is presented at the dizzy heights of 192kHz. It’s debatable whether or not forty year-old material needs such resolution, but the lofty sample rate does guarantee a transparent window on the source, something to be commended and encouraged.

After listening to the multi-channel and stereo mixes a couple of times, my preference ended up being for the former, but it was a close call. The surround mix (essentially 2/2.1 as no meaningful contribution is made by the centre channel) is considered and subtle throughout, in fact so understated is the multi-channel presentation as the rears carry little more than hall ambience that one quickly forgets that four loudspeakers are involved. It’s especially suited to those tentatively moving beyond stereo, but listeners who like involving multi-channel might be a tad disappointed – but don’t get me wrong, the material wouldn’t be suited to a voices-in-four-corners interpretation. Given that the surround mix opens out the soundstage across the front of one’s room, I’ll bet you’re wondering why I preferred the stereo? The reason is fairly simple; in the surround mix the vocals are pulled out into one’s room by mirroring front left/right content in the rears, a technique that has an impact their timbre – it’s inevitable, even if your room consists of matching front/rear loudspeakers. The voices appear warmer but are also a tad nasal and have an ‘in your head’ quality (an effect worsened if you don’t have time alignment for high-resolution sources) whereas the stereo track is purer and the voices more anchored in the front soundstage.

For those with DVD-Video players a 448kb/s Dolby Digital surround mix is included, an acceptable compromise that performs admirably but doesn’t quite offer the fidelity insight of its high-resolution MLP counterpart. More disappointingly, however, is the DVD-Video stereo track; it too is 448kb/s Dolby Digital. While the high data rate is a small comfort, there really isn’t any excuse for using lossy compression for the DVD-Video stereo track; 48kHz PCM would be far preferable. The DVD-Video content defaults to the top menu when the disc is first loaded, unlike the DVD-Audio content, which plays immediately without user intervention.

Another particularly strange difference between the DVD-Audio and DVD-Video content is that the disc isn’t given the same title. Menus in the DVD-Audio zone indicate that one is navigating around ‘Live and Swingin’ – The Rat Pack Live at The Villa Venice’, which is fairly close to the title on the disc artwork, whereas in the DVD-Video zone the title becomes ‘The Rat Pack: Live and Swingin’, The Ultimate Rat Pack Collection’, and that’s nothing like the title on the packaging. Take a look at our disc captures (link in the right column) for visual confirmation.

Disc extras include a photo gallery that extends to thirty images, disc credits and a video clip. The excerpt, which features a performance from the 1965 ‘Frank Sinatra Spectacular’ is said to have been pulled from the DVD-Video title ‘Live and Swingin’, the Ultimate Rat Pack Collection’, which is somewhat baffling if one is in the DVD-Video zone (see paragraph above). Running a shade over nine minutes, the clip shows its age but has been acceptably restored and is undoubtedly a worthy addition – interesting to see that three years after the Villa Venice appearance Davis Jr., Martin and Sinatra were still doing what was largely the same routine.

Even if you’re not the greatest fan of Sammy Davis Jr., Dean Martin or Frank Sinatra, the comedy interludes and the interaction between three pack members is priceless – at times they have the audience roaring with laughter – which makes the disc worth purchasing for that reason alone. Add to that some fine vocal performances and timeless songs and the result is a thoroughly engrossing, enjoyable experience from start to finish. All being well, ‘The Rat Pack Live at the Villa Venice’ will be released in the U.S. on the 28th October.