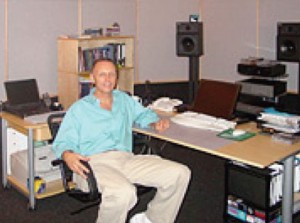 During the Consumer Electronics Show (CES 2003) in January, I spent some time listening to the new Linn Unidisk SACD/DVD-Audio player with Lon Neumann of the Sony SACD Project. Lon is the project’s Western Manager of Field Operations and is based in a studio that is located inside Marcussen Mastering’s facility in Hollywood . During that listening session, he invited me to drop by sometime and check out his studio in. Here’s a report on that recent visit.

Lon Neumann at his desk/workstation in his SACD Mastering Room in Hollywood.

Lon’s name appears on many of the SACDs that are produced in Southern California including the re-mastered SACDs done by Steve Hoffman and Kevin Gray for Audio Fidelity and Analogue Productions as well as the Jerry Goldsmith Surround Sound albums engineered by Bruce Botnick. In many of these cases he serves as the DSD Transfer Engineer who takes the signal from the console in these sessions and transfers it to the DSD Hard Disk recorder. But he also does SACD mastering, authoring and project coordination. As Neumann says, he wears a variety of hats in moving SACD disc projects along.

Some Background on Lon Neumann

He also spent time as Stevie Wonder’s engineer and was responsible for building the first digital recording studio in Southern California for Stevie Wonder.

After working with Stevie Wonder, he spent a number of years as a field and marketing engineer for the Mitsubishi X-80 Digital Studio Recorders and later the comparable Sony Digital Studio Recorder line. This was followed by stints at Warner Brothers Studio in film production sound, Grass Valley’s MVision High Definition Video project, teaching video and sound production at UCLA, authoring a chapter in the SMPTE Guide to Video and Sound Recording and most recently his work with the SACD Project in Hollywood.

One of the interesting assignments Neumann has for the SACD Project is to manage the Sony Sonoma 8 Channel DSD Workstations. 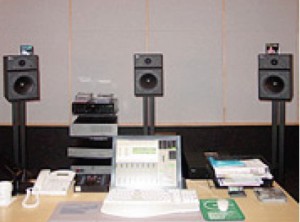 He also has a “travelling” Sony Sonoma DSD Workstation that is packed up and ready to go to remote recording and mastering sessions. It is this set-up that often travels to places like AcousTech Mastering in Camarillo, California for projects with Steve Hoffman and Kevin Gray. In fact, the travelling set-up had just returned from the sessions for Audio Fidelity’s upcoming ‘Reggae in Hi-Fi’ hybrid stereo SACD with Hoffman and Gray. That SACD is due out from Audio Fidelity in the months ahead.

Equipment in the SACD Project Room

Lon had the DSD master tapes on hand from some SACD projects he is working on, so he powered up the Sony Sonoma 8 Channel DSD Workstation and we had a listen to a couple of his current favorites from these upcoming SACD releases. 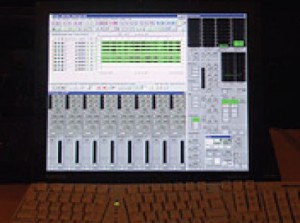 Next up was a selection from the ‘Seabiscuit Soundtrack’ entitled ‘The Derby’. The music on this Surround SACD was composed by Randy Newman and Lon commented on how much he has enjoyed working with Newman on this SACD project. The Derby starts off with just a few instruments playing before it begins to build and the full orchestra joins in. A lot of fun in surround sound SACD.

Leaving the world of surround sound SACDs, Lon then put on a selection from the upcoming hybrid stereo SACD from the rock group Death Cab for Cutie. Ever since this SACD release was announced there has been a lot of interest from rock fans about when it will be released. The latest word is the Barsuk label is looking at a release of the SACD version on November 4th with a vinyl LP release that was cut from the DSD master tape coming to market later on. The selection we listened to via the DSD master tape and the Sonoma DSD Workstation featured some fine straight ahead rock. Very enjoyable and this will be an SACD to watch for.

In Part II of this report, I’ll tell you about the rest of my visit to the SACD facilities on Hollywood. The visit included a trip to the Crest National pressing plant, a tour of Marcussen Mastering and a preview of the upcoming Surround Sound SACD Deluxe Edition of The Who’s ‘Tommy’.