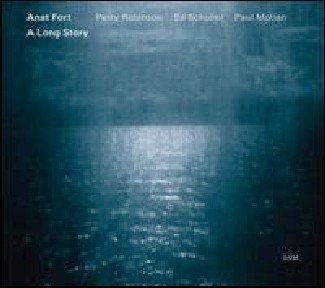 Interesting couple of albums have taken over my system for the past few months. There’s something of a unified thread running through these…acoustic, improvisational, crosscultural, cross-genre, slow tempos, and not exactly the cheeriest music I’ve ever spun. I’m not sure what this says (if anything) about the current state of jazz or my own psychological state this spring, but I hope you find something to enjoy in this month’s selections. Comments always welcome 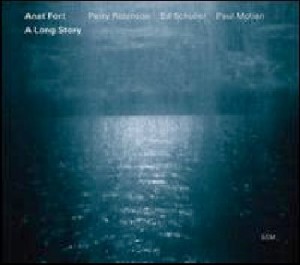 Here’s a fresh face. Anat Fort was born in Israel, and began playing classical piano at the tender age of 5. She developed a love for improvisation which brought her to the U.S. to study jazz in the mid ’90s, eventually landing under the tutelage of mellow avant-gardist Paul Bley in 1996 and recording her first album (Peel, on Orchard Records) in 1999.A Long Story, her second, was recorded in 2004 and just released this year.

Fort’s playing fits neatly into the open, spacious “ECM sound”, recalling pianists like Bley and Keith Jarrett, but her own, subtly Middle-Eastern influenced voice is not absent. With atmospheric drummer Paul Motian on board, as well as his frequent collaborator Ed Schuller on bass, this album is seldom abrasive or atonal, but that doesn’t make it necessarily easy to get in to. Delicate and understated, these haunting but gorgeous melodies require close attention.

As background music, A Long Story is a sure cure for insomnia, but two things save it from being an outright bore: one is the presence of clarinetist Perry Robinson, making his ECM debut here. Showing himself a very versatile player in this context, the normally bracing, hard-swinging Robinson fits the mood while still bringing some much needed energy to the proceedings. The second is Fort’s epic compositional style. Loosely held together by the leitmotif “Just Now” which appears in three variations for trio, solo, and quartet, the album is much more a suite of inter-related compositions than a simple collection of songs. Fort’s Long Story is just that…impossible to put to words, but moving for those willing to stay with her for the full 57 minutes. Fort does indeed have a story to tell, and if this recording is any indication, she will be telling it for a long time to come. 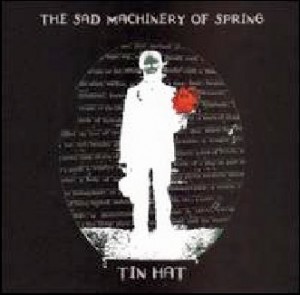 Formerly the Tin Hat Trio, the genre-bending group changed their name when founding member Rob Burger left and was replaced by multi-instrumentalist Ara Anderson, clarinetist Ben Goldberg, and harpist Zeena Parkins. Equally at home with jazz, classical, Eastern-European folk, tango, bossa nova, and bluegrass, Tin Hat is impossible to categorize. Their music has always been somewhat dark and eerie while remaining fun to listen to…The Sad Machinery of Spring (their fifth recording) delivers much of the same vibe but with the expanded sonic palette brought by the new members.

The “almost-everyone-in-the-band-plays-at-least-five-instruments” thing that you see in the list above is no gimmick… half the fun is in the bizarre textures & timbres these folks create out of their many odd instrumental combinations. At times it is not at all clear how they’re creating these sounds, the intro to the set-opening “Old World” is a good example, as is the Zeena Parkins feature “Black Thursday”. Many of the pieces have the scrappy, “coming-apart-at-the-seams” feeling of Tom Waits’ best records…not too surprising as Ara Anderson is a Waits alumni.

Some of my favorite tracks (“Dead Season”, “Janissary Band”) have something of a “broken down” groove that reminds me of an old Model-T driving down the street with three different-sized wheels: it moves, but it’s a pretty funky ride, and the whole things feels like it’s going to fall apart at any moment. A set highlight is “Daisy Bell”; a creepy, minor-key take on the traditional “Bicycle Built for Two (Daisy Bell)” that makes the singer sound like a sociopath who’s advances must be most unwelcome to poor Daisy!

Sad Machinery is inspired by the work of surrealist Polish writer and painter Bruno Schultz, who was shot to death by a Nazi officer in 1942. You certainly don’t need to be a fan (or even aware) of Schultz’ writing to enjoy this music, but these evocative little soundscapes make a compelling case for checking it out. Predominantly melancholy, but with a ray of hope shining through, this is a good album for listeners comfortable with the idea that, while everything may not be right with the world, there is still plenty to enjoy lurking in the shadows.