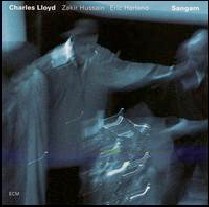 December is here, the holiday season…a time for wanton acts of kindness, endless shopping, and (of course) every music critics’ “top 10 best releases of the year” list. Sorry to disappoint, but frankly I don’t pay enough attention to new releases to even list ten total, let alone ten that I could vouch with any certainly that are the best of the year.

That said, I have been listening to some new music of late, so I’ve got something of a list for you. All of this month’s selections were, in fact, released this year, and have provided me with a good bit of stimulating listening. These would work equally well as gifts for your music-loving friends as gifts for yourself, and if you hurry, you can probably still find them at your local soon-to-be-doomed Tower Records for 40% off. Enjoy.

Loose, mesmerizing live date by tenor sax veteran Charles Lloyd and two percussionists: drummer Eric Harland and Indian tabla master Zakir Hussain. Lloyd is a particularly warm, lyrical player, so I wouldn’t think a rhythmheavy environment would play to his strengths, but he performs admirably enough, providing a “multi-culti” flavor wailing away in the harmonic minor scale. Hussain steals the show, however, (as he often does any time he shows up), playing with the speed and complexity of someone with four arms. The tabla is capable of producing a wide variety of sounds, and Hussein uses them to great effect, adding substantial weight to the session far beyond what you might expect from a drum/sax pairing. Relative newcomer Harland contributes a good amount of fire himself, not to mention some smart, sensitive polyrhythmic interplay with Hussain. Much of the session has something of a meditative vibe, however the first three tracks (representing about a half hour of music) are an absolute jam, and alone worth the price of admission. 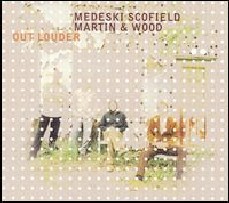 Even casual Medeski, Martin, & Wood fans know that this is the second album they’ve made with John Scofield, the first being 1997’s A Go Go…a worthy effort along the lines of the great ‘60s jazz organ recordings (a la Jimmy Smith, Brother Jack McDuff, etc.). Out Louder updates the sound for the 21st century. Everything is grittier, funkier, and trippier here, from Sco’s neo-Hendrixian solo on “Tequila and Chocolate”, to the ultra-groovy remake of Peter Tosh’s “Legalize It”. B3master John Medeski and funky drummer Billy Martin are up to their usual very high standards, but overall this recording is more about group interaction than extravagant solo work, which may have something to do with how great Chris Wood’s bass playing sounds, somehow he seems more essential to the proceedings here than in previous outings. If your idea of holiday entertaining includes a little shaking of your groove thang, this would be a great set to pick up. 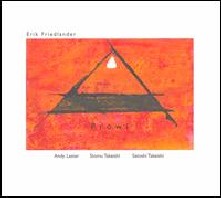 This music defies easy categorization, although “avant-garde world music funk folk” comes close. Friedlander (son of fine art photographer Lee Friedlander) is a cellist who’s been active in Downtown Manhattan’s avantgarde jazz scene for years. The group assembled here (Andy Lawster on alto sax, and brothers Satoshi and Stomu Takeshi on drums & electric bass) tours regularly as Topaz, and I’m willing to bet sounds completely different from any cello/sax/bass/drum quartet you may have heard. Friedlander coaxes a broad sonic palette from his cello, in addition to his more traditional arco and pizzicato techniques, he produces sounds reminiscent of an acoustic guitar and a Japanese koto. The group plays scales and rhythms that span the globe, and although the arrangements are spare, a myriad of moods and colors are conjured. This could have easily resulted in an “interesting” album (worthy of academic consideration but not necessarily repeated play) if the results didn’t groove so incredibly hard. I’ve been coming back to this one time and time again since I found it…this is adventure music almost anybody can enjoy. 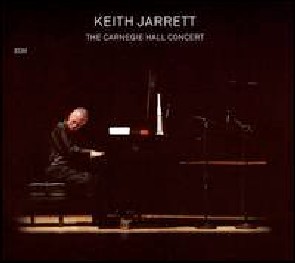 Playing a solo concert of improvised music has got to be the most terrifying event in the life of a jazz musician. Think of it: everyone in the audience has paid to see you; they know your records, they’ve seen you play before, so tonight (and every night) you are expected to play the best concert of your life. You have no bandmates on stage to hide behind, to take a little break comping changes underneath their solos, and every note you play is to be invented on the spot. You can’t fall back on classic chestnuts from your oeuvre, you can’t even play some trademark licks, because there’s a good chance people in the audience know your recorded solos by heart, and they’ll know you’re faking it…

Despite all that, Keith Jarrett continues to perform solo concerts, and often enough that he has just released his tenth live solo piano recording. Carnegie Hall represents the second episode in a new chapter of his solo improv style. In earlier recordings, like the classic Köln Concert (released in 1975), improvisations were typically 20 to 45 minutes long. These vast sonic landscapes had interesting points along the way, but seemed held together by lengthy sections of repetitive vamping. With last year’s Radiance, Jarrett decided that this device had grown to constrain him. He did away with the idea that his improvisations must be long, allowing himself to simply stop playing whenever he felt a piece was done, and start again with a completely different idea. This not only gives him the freedom to explore more territory in a single concert, it opens his music up to a new audience who may be more comfortable with the shorter works.

Many parts of The Carnegie Hall Concert, which range in length from three to nine minutes each, have a familiar song-like quality to them, despite the fact that they are completely improvised. If you think that free improvisation is by definition atonal and abstract, Jarrett will open your mind. While there are a few abstract pieces here (“Part IV” and “Part VI” are good examples), Jarrett isn’t really at his best with these. The most successful are lyrical and beautiful (“Part VIII”, “The Good America”), and although at times it is a dark beauty (“Part III”, “Part V”) the beauty is there nonetheless. He delves quite enjoyably into a pair of light-hearted toe-tappers: “True Blues” and “Part VII”, which have so much bounce and verve they might as well have been taken from the Vince Guaraldi catalog.

Jarrett is one of the most technically adept pianists in jazz, but there are some aspects of his performances that require getting used to: his “singing” (or humming, or grunting, or whatever you want to call it) is as present on Carnegie as ever, and at times he indulges a bit too heavily in lyricism (I have yet to remain awake for the duration of “Part X”). Jarrett’s solo work has always demanded to be taken on it’s own terms. Perhaps he’s mellowing with age, but if that comes across in his playing then he’s just being honest, which is all we can hope for from any artist.

Jarrett made a special connection with the audience at Carnegie Hall, a “being at the right place at the right time with the right thing before the right people”, as Duke Ellington said of his legendary engagement at the Cotton Club. A recording can never capture the full magic of a great live event, but there are hints of it here, particularly in the thunderous applause during the encores section…a great deal of emotion was shed on both sides of the proscenium that night. Overall, The Carnegie Hall Concert makes for some nice listening, and would be a good introduction for anyone unfamiliar with Jarrett’s solo work.