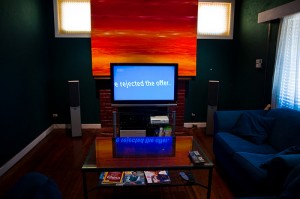 Now, Alyse seems to have this theatre in a room with windows, or at least some kind of glass blocks facing outside, because there’s some light in there.  And a second thing you’ll notice is the glass coffee table right in front of that sweet Sony TV, giving off a reflection back at you. Generally, folks, the home theatre is a bad place for any kind of reflective surfaces that aren’t transmitting a picture.

Aside from these two fairly minor problems, however, Alyse definitely has a sweet home theatre setup.