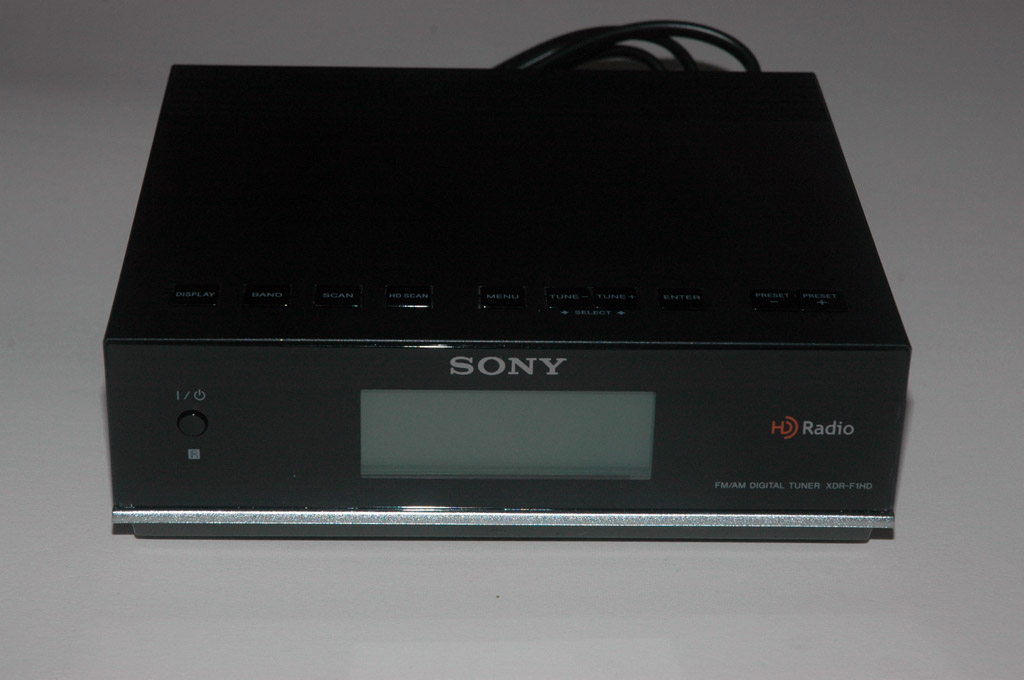 Working from home on a pretty regular basis allows me to listen to music from a wide variety of sources. A few years back I had all but given up on radio in the home, the difference in sound quality was enough to question its value. Then came the promise of HD radio. A coworker has a Polk Audio radio in his office and once I heard it I had hopes for radio’s rebirth.

A$$A’s founder, Mark Marcantonio, received the Sony XDR-F1HD tuner from a reader for a suggested review. Knowing my taste, Mark asked me to take it on. No problem on my end, as I could decide in a final manner whether HD radio is worthy of it’s potential as a music source when I work from home.

The XDR-F1HD is about the size of two VHS tapes. The front display is large with a light grayish background with darker grey display letters/numbers. While I appreciated the easy-to-read display, the backlight is very bright even when turned off, making it somewhat distracting. It is recommended that if you don’t need to see the display clock when turned off, to use the MENU button and turn down the brightness. Though it does make for a decent nightlight. All the controls are buttons set on top. They consist of ten squares in two groups of four, and one group of two.

The user can enter up to preset stations into memory. I highly recommend using this feature immediately, as scanning through the entire bandwidth with the XDR-F1HD, is a rather cumbersome and tedious process. Reception quality for analogue FM was average, it didn’t fare any worse than an older Sony receiver I use for my HT setup. HD tuning performed equally well in comparison to the analogue stage. But not as well as my neighbor’s HD car deck in the driveway for what it’s worth. 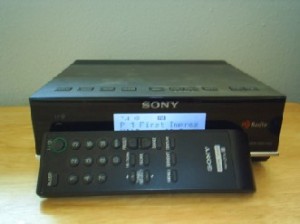 Sony’s smartest move was to include a very useful remote control. Offering all the features of the controls buttons, plus a keypad for selecting stations by their memory position. A salute to Sony’s ergonomic design standards as the various buttons are designated by specific shapes. In just a few days I had the buttons memorized by feel.

My main concern is sound quality, as my favorite stations are close enough that I don’t feel the need to worry about reception. I’ve heard other HD radio setups and the difference always sounded to me like a blanket was taken off the speakers. In the case of the XDR-F1HD, it’s a light blanket at best. The extended dynamics I hoped to hear just didn’t exist with one rock station I normally listen to. Bass lacked the increase in punch that I expected. This surprised me, therefore, I went in search of some classic music broadcast in HD. The result, the local NPR station after some searching. Surprisingly, there are several good stations in my area that have yet to bring on HD broadcast, even though they have rather advanced music streaming setups via their internet page. I’m not versed in all the technical details, but it seems from an outsider’s view that this combination should be a natural match. Maybe it’s the amount of space it takes up in the incoming data “pipe” on most Internet connections. Whatever the case may be, one can hope that the limitations can be overcome and the sound quality will go up sooner rather than later.

The XDR-F1HD’s output did, as expected add detail and some depth to the work of Brahms that was played that day. In that regard I do believe that HD radio has the opportunity to be embraced by classical fans. It’s no substitute for vinyl or digital, but it is a nice step up from analogue FM broadcasts.

As time went on with the Sony XDR-F1HD, I began to see it in the light I believe it should be considered, as a secondary music source, not for serious listening but as twenty-first century background music. In that regard, with it’s small footprint it can easily fit unobtrusively into a rig. For some radio fans the XDR-F1HD quite possibly may just be the answer they are looking for. In my case, I’ll keep on looking.