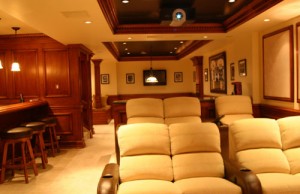 Sometimes, sad to say, there are problems with setting up a home theater in a basement.  I know, it’s bizarre.  it’s downright unthinkable.  But the fact remains that sometimes, just sometimes, a theater can’t easily be installed.

Especially when you’re the kind of homeowner that wants to put a bar, billiards area, play area, gym, bathroom and lighting plan in along with your home theater.  Now that’s going to put all sorts of weird angles into play.

It took a whole lot of work and cash, but the end result is nothing short of incredible.  Plus, of course, there’s a panoply of kickass home theater hardware in there to round it all out.  For instance, there’s a Runco projector and matching one hundred inch screen, Triad speakers, Marantz receiver and DVD player, Integra DVD player and plenty more to boot, including both a Wii AND an Xbox 360.