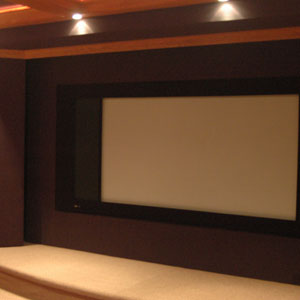 You might think that, if you lived on a lake, you wouldn’t be terribly interested in the offerings of Hollywood.  No, just sitting outside and watching the sun rise, or the sun set, or the moon or the stars on that big screen of water in front of you might well be enough for anybody.  But for the homeowners in today’s sweet home theater setups profile, it’s not.

No sir, this home theater setup requires a twelve foot screen to be properly enjoyed.

Now, a twelve foot screen, that sounds pretty big.  And it is–if memory serves we’ve only had one bigger here, and that weighed in at about a hundred and sixty inches (twelve feet would be a hundred and forty four).  Plus, as always, there’s plenty of hardware backing that screen too, like a Runco projector, a Sony Blu-ray player, Triad speakers and more besides.

But adding these all together gives you a home theater setup that’s nearly as sweet as the lake view out the back window.