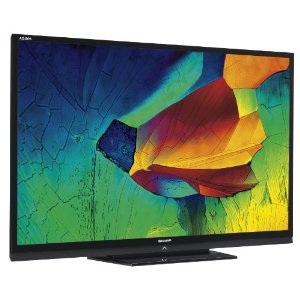 The?Sharp LC60LE632U is a sixty inch, 1080p LED television that offers a 120 Hz refresh rate to improve smoothness of video playback, as well as built-in wi-fi to open up a variety of streaming apps, including both Netflix and Blockbuster on Demand and a host of others besides. You’ll also get the VyperDrive game mode, a Mega Contrast display, two ten watt speakers with a fifteen watt subwoofer, four HDMI ports, a component video port, two composite ports, two USB ports, an ethernet jack and a PC input.

This television covers the waterfront, with both old and new components having a place in the proceedings. Obviously new parts will get first pick, but older ones will have their place as well. The picture is unbelievably good, and the sound quality is surprisingly high as well, probably owing to the assist of that subwoofer. There’s precious little to not like about this television for your home theater system.

About the only place where this suffers is the price you’ll have to pay to lay hands on one of these. It’s not too bad given the incredible quality here, but objectively, most people will probably not want to drop $1488.18 on a single purchase.

It may be expensive, but the Sharp LC60LE632U is going to make anyone’s home theater system look as sharp as the name implies.