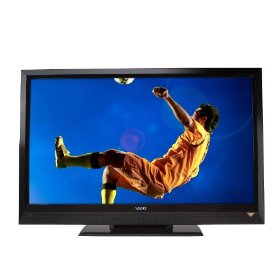 Vizio has given us a lot of pretty nice pieces of hardware, and the line only continues with the affordable yet still quite worthwhile Vizio E421VL, an LCD television that will bring value and a decent overall package to your home theater system.

Now, at first blush, this might seem like a relatively simple television. And indeed, it is. There’s no streaming port here, no accompanying bells and whistles. But at the same time, it’s got the slightly increased refresh rate, the ambient light sensors, and sufficient ports to cover both older and newer hardware. The picture looks pretty sharp for a smaller big screen model, and the sound is better than the norm with the speaker augmentations.

Here’s the part that will really get you taking notice: the folks out at Amazon want $510.73 for one of these, which as prices go is really not half bad considering what all you get here.

The Vizio E421VL is an excellent value, and while it may not be as impressive as a lot of its contemporaries (let’s face it, stacked up against an LED system an LCD looks about like what a CRT system looked like to an LCD), it’s still going to have plenty to offer, especially at this kind of price.