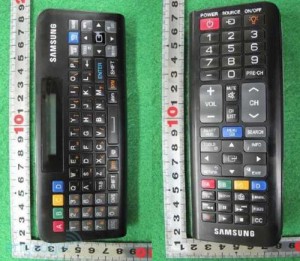 Apparently, this remote from Samsung has just appeared at the FCC.

Yes, this is not two remote controls. Apparently, this is one remote, that is double-sided. Clearly, the designer have never heard of Logitech’s Harmony remote with a touchscreen.

In other words, I’m sure that this remote will probably clear the FCC, but I won’t be buying it.