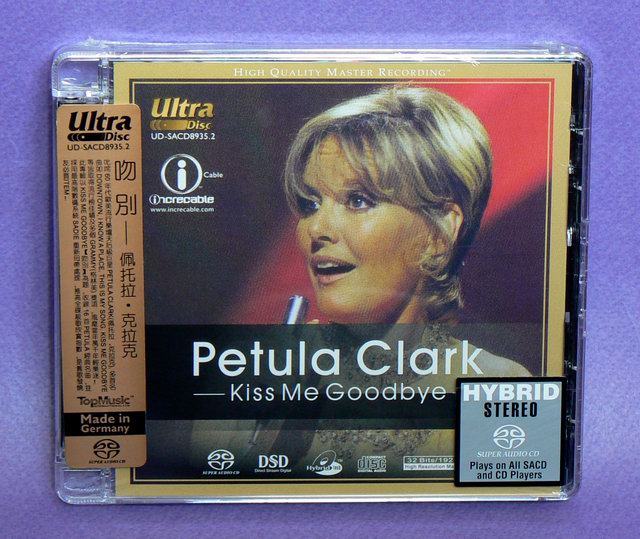 Kiss Me Goodbye features 16 of Petula Clark’s best known songs from the 1960’s. Top Music notes that “This collection features hits that made Petula Clark a star of U.S. pop radio. Clark has had a varied and remarkably successful career, beginning during World War II, developing in France, bringing U.S. pop stardom, and continuing today at clubs and concert venues around the world. Petula Clark continues to perform to sellout crowds. These U.S. hits – by no means her first forays into music – began a career that defined a pop style and created an international superstar.”

The SACD edition of Kiss Me Goodbye was remastered for SACD by Povee Chan. Equipment used on the project included the SADIE DSD-8 Series 5 DSD Workstation, PMC TB2S-A Monitor Speakers and the Isoclean Power Conditioning System. The Hybrid Layer Stereo SACD was made by Sonopress on their Hybrid SACD production line.

Kiss Me Goodbye features the original versions of all of Petula Clark’s big hits. However, listening to the SACD leaves me with the impression that the remastering engineer didn’t have access to the original master tapes for this release. As a result, I think listeners will find that sonically this SACD sounds very close to the CD version of these hits rather than offering the sonic improvements we’ve heard in some of Top Music’s earlier SACD releases.

Availability
The Kiss Me Goodbye SACD by Petula Clark is now available in music stores throughout Hong Kong. It is also available in the U.S. through several web sites that carry SACDs including Acoustic Sounds, Elusive Disc and Audiophile Resource.