Recently, I was chatting with a coworker about cd players. Now, this is a very tech-savvy guy, with all sorts of electronic toys and a background in audio. So it floored me when he couldn’t see the value in a cdp over $200. I spent the better part of an hour discussing high-quality components versus bottom line items. He still couldn’t see the value. Finally, I decided that the only way to get him to see the light was to change the comparing to something he was in tune with… computer equipment. Well, it worked, he finally could appreciate the value that quality gear represented.

A few days later, I brought into school the Onix CD-5 cdp. I wanted him to feel, hear and see the difference that comes when using a quality transport mechanism. First, I had him listen and feel how the dvd player in the library felt and sounded. Then, we moved the thirty-odd steps into my classroom where I had him load a disc. His immediate reaction was one word “smooth”. Since then, our discussions have been less skeptical and more open to the differences.

The Onix CD-5 is the updated name for the cd-99. It comes in just one finish, a high gloss black face with gold lettering and gold buttons. The look is understated and simple, though I do wish the lettering and symbols for the five control buttons were larger, as in less-thanbright rooms makes them a bit hard to distinguish. The blue LCD panel is fairly readable, but the clear plastic “lens” can catch glare under certain lighting making viewing a bit difficult. As mentioned above the Phillips transport is whisper quiet, even more so than in the Music Hall cd25, which shares many of the same components.

The CD-5 case is made up of high gage steel and is quite rigid. The back panel places the RCA outputs on the left side, followed by the coaxial digital out. Finally, on the far right is the power chord receptacle.

Cracking open the cover reveals a clean, simple layout. The power button and needed wiring go along the left side. Next to that is the Phillips transport mechanism. Behind the transport sits the power supply encased in a black and gold cover. The right side is the mother board with the connecting cable to the display and the audio outputs. The look is very tidy and balanced, demonstrating a well thought out design, not some quick make-a-buck and run effort.

I began by listening to some cd’s on my HK PL8450 five disc player. As mentioned previously, it is a pleasant sounding unit, but basic, in all honesty. It lacks a true DAC unit. I then switched over to the Onix CD-5. Immediately, a veil had been lifted, the stage became both deeper and wider. The quiet passages became quieter and the intensity of dynamic moments increased in power. The classical masterpiece Appalachian Spring by Aaron Copeland with it dreamy passage  Nocturnal was breathtakingly quiet, it was easy to picture the music being played in the vast, beautifully empty expanses of Wyoming. Following this track comes Rodeo, with it’s plucky, kinetically energetic instrumentation that requires fast transient movement. The CD-5 brought forth the depth that goes missing when played thru the HK or my iPod (AIFF files). That depth and large soundstage is what makes that movement so powerful when listened to live, and a pleasure to hear from the CD-5.

Next, came some modern jazz, Spyro Gyra’s Waiting for the Sun cd. As a reviewer, this cd has some wonderful passages of multiinstrument layering while keeping the artists separate. The saxophone is placed front, just left of center. The drums, back and seemingly up on a platform. Now, over time I’ve found that some cd players lack the harmonic capability to recreate proper placement. The CD-5 had no problems in this regard.

While using my demo cd, John Mellencamp’s Justice and Independence, with it’s machine-gun drum work sounded exceptionally clear and distinct, the solo involving the lower tom-tom exploded with every hit.

Female vocals were a pleasant surprise. The rich smokiness of Melissa Etheridge’s vocals sometimes comes out as bar hall gravel and little else.

In the track Into the Dark from Breakdown, one gets to hear a more retrained voice, with some wonderfully smooth upper (for her) vocals. The CD-5 reproduces this fresh territory nicely, yet never letting go of the haunting lower thread that anchors her voice.
In comparing the Onix CD-5, I first listened to it against its factory relative, the Music Hall cd25.2. True to their heritage, they sounded very, very similar. The difference I detected with consistency was in the transport. For whatever reason, the Onix was a quieter spinner, even though they are the same transport unit. Maybe they are secured to the chassis differently.

Next, I pitted it against my recently acquired Jolida JD100 tube player. The Jolida came out ahead, but considering the difference in price, some $500 before the upgrades, one could make a fair argument that the Onix is a better value for many applications. Whatever the case, the Onix CD-5 did itself proud against a stellar competitor. 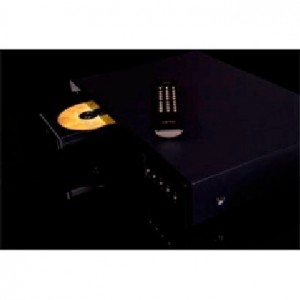 Are their any flaws, not that I could detect, but limitations, yes. At this price point there are trade offs, resolution and secondary detail are limited. Acoustic guitars lack a bit of depth, but that comes from being spoiled by the modded Jolida. Overall, unless one is directly comparing to something like the Jolida, or placing it into a 10K rig, one would be hardpressed to spot any limitation.

Once again, I’m very impressed by what Mark L. Schifter and his group has brought forth to the market. For under $400, I seriously wonder if there is a better value/build quality in a cd player with HDCD on the market. One look under the hood proves that the CD-5 is not a big box with miniaturized basic components. Instead, one finds a beefy, serious piece of audio. Take the opportunity to audition the Onix CD-5, it’s worthy of its name and heritage of its father, MLS.