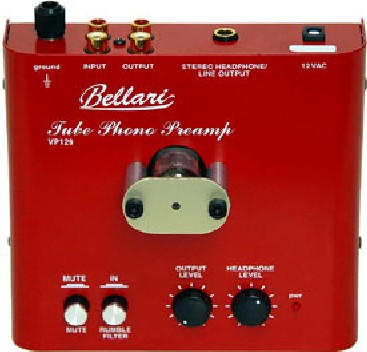 I have grown up loving to listen to music, so as I have matured I now enjoy multiple genres of music, where I only used to enjoy rock and roll. My earliest recollection of recorded music go back to when my older sister would pull out her Beatles and Rolling Stones albums to play on her GE record player. From that moment on, vinyl playback has always held a special place in heart. My son is now getting into the act, having recently graduated to a Music Hall MMF-2.1 turntable from an old Technics turntable that I found for him at a swap meet.

That brings me to the Bellari VP129 vacuum tube moving magnet phono preamplifier. All of my stereo amplifiers and preamplifiers are vacuum tube models. Some years ago I discovered the magic of vacuum tubes and have never looked back. Listening to my son’s new turntable peaked my curiosity, how would a vacuum tube phono stage sound compared to the solid state phono stage in his Onkyo receiver? I decided to try the Bellari VP129 in his moderately priced system before installing it in my reference system for this review.

To be sure, many of us start out like my son, taking hand-me down components and adding something new occasionally to build a system. My son’s system consists of a pair Sound Dynamics R-65 two way bookshelf speakers, an Onkyo TX-8211, 50 watt AM/FM stereo receiver and the above mentioned Music Hall MMF-2.1 turntable with a Goldring Tracker MM cartridge. It is a nice beginners system that he has set up in his bedroom. 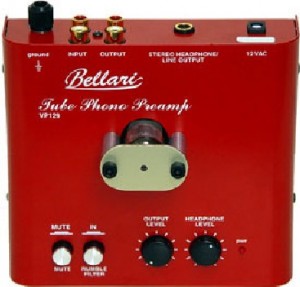 For this review I mounted the speakers on a pair of 24” high Plateau speaker stands securing them with DAP “Fun Tak” which is similar to, but much less expensive than “Blue Tak”. The stands are filled with lead shot and sand for mass loading and were placed 2 feet from the back wall and 6 feet apart. I toed the speakers in slightly towards the listening position which placed my ears 6 feet back from the front plane of the speakers. For speaker cables I used a 6 foot pair of Kimber 4TC and to make the connection between the VP129 and the Aux input on the Onkyo, I used a pair of Vampire OFC series half meter interconnects.

The made in the U.S.A. Bellari VP129 tube phono preamplifier is a neat and tidy package consisting of a bright red painted metal chassis with a lone 12AX7 tube protruding from the top. There are two knobs on the top right side of the unit for adjusting the preamp output and the headphone volume level. In addition there are two small round push buttons on the top left side of the unit for activating the rumble filter and the mute if desired. On the rear apron of the VP129 there are gold plated RCA connectors for the phono input & preamp output, a thumbscrew phono ground connection, ¼ “ stereo headphone jack and a power input jack for the wall wart power supply. There is no power “on” switch instead that function is accomplished by plugging and unplugging the power supply from the wall. 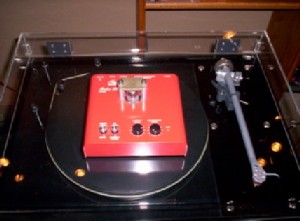 I warmed up the system by listening to some of my favorite jazz standards and then used some specific recordings for critical listening, first up was Art Blakey and the Jazz Messengers Blue Note 4003. The first cut on the second side is actually 3 jazz tunes called “The Drum Thunder Suite”, which is usually is a fairly dynamic recording when played on my reference system but it was not nearly as detailed or energetic when played through the Onkyo TX-8211. Switching to the Bellari brought out more of the life of the recording. Benny Golson’s sax sounded smoother and less etched, the drums sounded much more powerful with a more lively presentation. The depth and width of the soundstage were also much greater than when I used the solid state phono stage in the Onkyo. I switched recordings again, this time cueing up Meet Betty Carter and Ray Bryant Epic Reissue LN3202. My favorite track is “Moonlight in Vermont”, Betty Carter provides a special performance of this jazz standard, she has a rich and smooth voice though at times the recording can sound bright. The thinner sounding Onkyo accentuated the “S” sounds and had a compressed sense of space around the vocalist when compared to the Bellari which again provided a more spacious and dynamic presentation of the music. 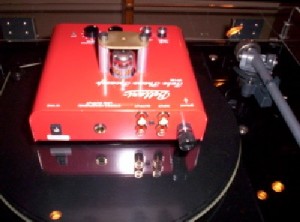 One of my favorite Tom Petty albums is “Southern Accents”. I especially enjoy track one on the album, “Rebels”, which is very well recorded in compared to most of the rock music produced in the eighties. When assessing the performance on both phono stages you are much more engaged when listening to the Bellari VP129. It sounds like rock ought to sound!

Next I set up the Bellari through the auxiliary input on my reference system so I could compare it with my ARC SP16 phono stage. My reference system consists of a VPI HW-19 MKIII turntable, Audio Research SP16 vacuum tube preamplifier, Audio Research VS110 vacuum tube amplifier, Paradigm Signature S2 monitors mounted on Target steel, lead and sand filled stands. My Speaker Cables of choice are a 10 foot pair of Alon’ Black Orpheus bi-wire and I presently use Eichmann Express Six interconnects throughout the system. My turntable is set up with a Rega RB600 Tonearm and a Clearaudio Beta S MM Cartridge. My listening room is 13’ X 18’ with 7’8” ceilings. I have positioned the speakers out from the rear wall 42” and away from the side walls about a foot, toed in sharply, on axis to the listening position.

There are some products that really shine no matter what the price point. Think of the Bellari VP129 as the little engine that could! Although the Bellari only provides 30db of gain it is still very dynamic. It didn’t quite have the air and sparkle of the ARC SP16 but it did acquit itself quite nicely presenting a wide and deep soundstage. I played a copy of the Blue Note 1590 reissue of “Candy” by Lee Morgan. The Audio Research had a greater sense of “being there” compared to the Bellari but there was a very symbiotic sound inherent in both preamps. While listening to the ARC SP16, Lee Morgan’s Trumpet had a bit more presence, Doug Watkin’s bass had more weight, Sonny Clarks piano had more clarity and Art Taylor’s cymbal’s had a smooth shimmer that floated in space.

Regardless of the cost, the palpable musicality of Bellari VP129 is evident in both moderate and expensive systems. At $250.00 the Bellari VP129 would be a great way to improve the performance of your vinyl playback system especially if you have a solid state receiver or integrated amp with an on-board phono stage. The Bellari will definitely smooth the rough edges while keeping the soul of the music alive. The only caveat would be to make sure and that you audition it in your system before buying to ensure that there is enough gain to reach satisfactory volume levels. I heartily recommend this phono preamp to anyone who loves music!