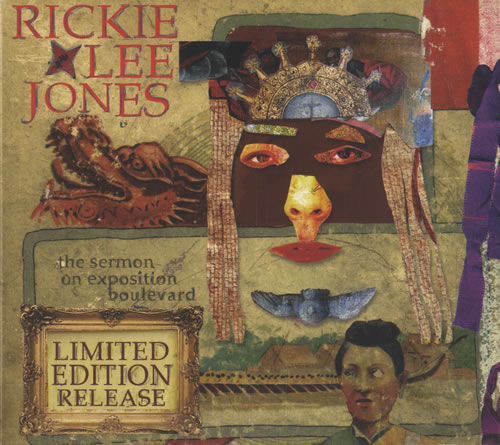 The Sermon On Exposition Boulevard, the new album from Rickie Lee Jones, is now available from New West Records in 5.1 Super Audio CD Surround Sound. The SACD version of the album is available on a special “Limited Edition Release” edition that features the Super Audio CD, a DVD Video Disc and a 24 page booklet about the new release.

High Fidelity Review readers will recall that New West Records released a Single Inventory Surround Sound SACD of John Hiatt’s Master of Disaster album (New West Records NW 6076) in 2005. This album was one of the first to be recorded on the 24 Channel Sonoma DSD Workstations and went on to win the year’s High Fidelity Review Listener’s Choice Award at the 2005 Surround Music Awards event.

Singer Rickie Lee Jones is best known for her hit single “Chuck E’s in Love” in 1979. Since that time she has recorded a number of albums that feature her unique blend of jazz, folk and pop styles. The Sermon On Exposition Boulevard is being released in both Stereo CD and in this Limited Edition which comes in a 6 fold digipak case and includes both a Surround Sound SACD disc and a DVD Video disc. The SACD features the 13 songs on the album in SACD Surround Sound, SACD Stereo and CD Audio while the DVD Video disc includes 256k encoded MP3 files of the music on the album and film clips from the album recording sessions.

New West Records describes the new album by noting that

“What will certainly be most striking to some fans about The Sermon On Exposition Boulevard is that it rocks harder than any album the two-time Grammy Award winner has ever recorded. “Nobody Knows My Name,” the striking opening track, might best be described as “minimalist pure pop punk rock,” and the evocative, riff-‘n’-hook-filled, stream-of-consciousness rant titled “Falling Up” follows in a similar decidedly art-rock manner.

Essentially what Rickie Lee Jones and her collaborators have done on The Sermon On Exposition Boulevard is to put Christ’s words into a modern-day context, portraying those words in a way that anyone can understand. Hence, “Elvis Cadillac”–which not only talks about cruising around Heaven in the King’s most famous vehicle, but also mentions the late, great Janis Joplin. After all, if anyone in recent history can be considered a secular Jesus, it would have to be Mr. Presley, arguably one of the “Christs” walking among us for that generation.”

The album was produced by Lee Cantelon, Peter Atanasoff and Rob Schnapf and mixed by Doug Boehm. The Stereo tracks were mastered by Alan Yoshida at Ocean Way Studios in Hollywood with the 5.1 SACD Surround Sound tracks mastered by Gus Skinas at the Super Audio Center in Boulder, Colorado. The Hybrid Super Audio CD disc was made by Sony DADC at their Hybrid SACD replication line in Terre Haute, Indiana.

The SACD Surround Sound tracks feature an excellent 5.1 Multichannel mix by album co-producer Lee Cantelon and engineer Jim Crichton. The Surround Sound version of the album really opens up each song and uses all of the channels to bring an immersive 3-D feel to the material on the album. The Surround Sound team and SACD mastering engineer Gus Skinas really take advantage of the Super Audio CD format here to highlight the instruments, effects and textures of each song. Standout tracks include Nobody Knows My Name (track 1), Falling Up (track 3), It Hurts (track 5) and Circle In The Sand (track 8). The disc is an excellent example of how Surround Sound and the Super Audio CD format can enhance a rock performance like this one.