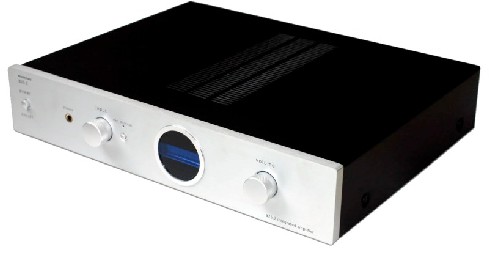 One of my favorite trends in audio is the return of the silver faceplate. Maybe it’s because I grew up in the time of the gorgeous silver and wood side era, when form was as important as function. I can remember one of the reasons I bought my first piece of decent audio gear, a Harman Kardon HK680i receiver had the classic h/k champagne finish. Whatever the case may be, it was with disappointment when the 1980’s and 1990’s became synonymous with black faceplates. Luckily, the twenty-first century opened with a return to visual sanity and silver was back in vogue.

In this case, the front of the a25.2 is a 1/8” inch thick piece of brushed aluminum. Just as critical for those of us with middle-age eyes or beyond is the larger than standard font used for labeling. This sounds silly, but this simple touch makes life so much easier, especially under lower light conditions, thanks Roy! Overall the front face is a tribute to simplicity, with its rounded edges and elegantly few knobs and buttons, the WAF is definitely high, as my spouse will testify. From left to right with plenty of space between: power button, headphone jack, input selector dial, record monitor button, round LCD display (a nod to European design), and the volume control. Both the selector and volume knobs are nicely textured in a criss-cross fashion giving off a nice feel and hiding the eventual fingerprints. The selector knob has a nice notch feel for each selection. The LCD glows in once again, a nicely sized blue. The round display window seemed at first a bit too European for my new world design tastes, but I quickly came to enjoy the look. 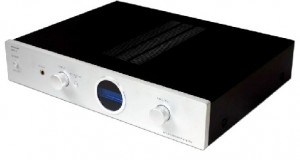 The back panel is as equally simple in its layout. From left to right: CD, DVD, Tuner, Aux, Tape, Rec Out, and Pre Out (a little bit of spacing for the two sets of outs would have been nice). Then, comes the much easier horizontal placements of the left and right fiveway speaker binding posts. Finally, is the three-way power plug with voltage selector.

The interior is a testament to separation of power and electronics. On the left side sits a rather massive toroidal transformer, a series of capacitors, and a massive heat sink running from front to back that also acts as a divider. The right side consists of the pre-amp section. The layout is a logical tribute to electronic engineers. For those wondering if Roy Hall just relabeled an Asian amp, I can say that in other reviews of the second generation, he has stated that they are his design. After seeing the Music Hall name stamped on the motherboards, his statement is all but validated. 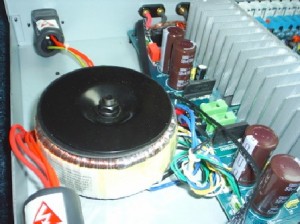 Virtually all listening was done with the matching cd25.2 cd player. My first sonic impression was of quiet, the a25.2 has a wonderfully low noise floor, so much quieter than my trusty Adcom GFA-535. Considering it’s some twenty years newer, this should be expecting, but is not always the case. I hooked up the system in my large 13’x13’ spare bedroom. Over the course of the review, I mated the Music Hall combo to a variety of speakers. I began with the supposedly most difficult pair to drive, the Polk Audio LSi7 (6 Ohms). With its toroidal transformer, the a25.2 had no problems driving the LSi7’s. Bass response was smooth and quick with an authoritative thump when needed for lower register notes. No distortion was evident at the limits of my loudness toleration (somewhere in the mid 90db’s). Overall, a nice pairing with the low noise floor of the a25.2 and the Vifa ringradiator tweeter in the LSi7’s.

The second pairing matched up my reference Totem MITES (8 Ohms) to the a25.2. Since the MITES are a brighter speaker by any measure, I thought this would be an excellent choice for measuring the noise floor. Once again, the Music Hall was a very stealthy unit, with only the very slightest hint of noise. Another impressive point was the control over the midrange bloom of the MITES. The a25.2 kept the occasional mushiness that can occur during some work by the jazz group Spyro Gyro, just by the nature of the instrumentation. This match worked optimally since the a25.2 mids are a bit understated.

Finally, came the pairing with the Era Design 5’s (6 Ohms). This turned out to be a decent fine pairing, if not spectacular. As mentioned in the Design 5 review, these speakers have smooth but bright tweeter, a non-blooming midrange, and powerful bass. The a25.2 reveled in playing the wide variety of rock and roll presented. Of particular note was John Mellencamp’s Justice and Independence track, with its various staccato notes. The a25.2 kept pumping with quick succession, no lag.

During these taxing passages I checked the top of the unit, the amp stayed comfortable cool, with only the slightest tick upwards in temperature.

Conclusions about Music Hall a25.2

There is very little to quibble about with the a25.2, it’s simply a well thought out, fine performer. My only gripe is with the remote, and this is a criticism to the industry as a whole: make button section categories a much different size, please! Nothing is more frustrating than pressing the wrong button because you can’t tell the difference. Secondly, why can’t the industry spend the extra quarter and provide decent alkaline batteries. The heavy duty ones provided are usually 75% dead by the time they are first used.

Ok, onto the positives. I love the clean design, there is nothing worse than seeing the cockpit of the space shuttle staring you back when you want to use the panel. The horizontal, side by side binding posts is so much easier to deal with, no matter which way you attach the cables. 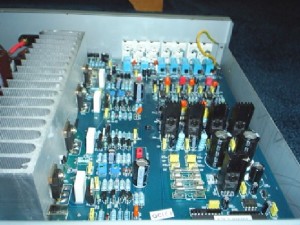 The sound, just have to compliment the tremendously low noise floor, especially without limiting the high frequencies, it’s just plain enjoyable. Going back and listening to my older amps isn’t as nice now that I hear the silence. Just as important is the transient response; the a25.2 performs without attention but with authority. It’s not a Krell, but then again name a Krell amp for $550, it’s not going happen. Instead, you get a fine sounding piece of equipment that can handle difficult loads and subtle passage with ease.