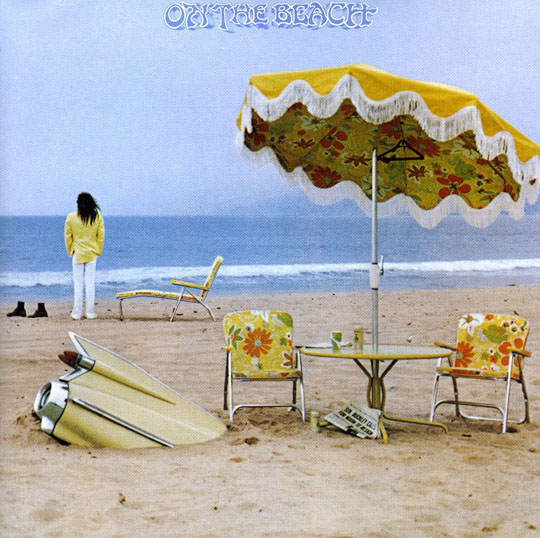 Neil Young’s quest for a digital medium that is adequate as an archive for his ageing tape store seems to have finally found its end. His enthusiasm for the DVD-Audio format has thus far produced the idiosyncratic 5.1 mix for ‘Harvest’, and the more naturalistic use of rears for ambience on ‘Road Rock Vol.1’ and ‘Greendale’ (see review), but here we have the first fruits of his digital stereo archive project. On the 13th April, Rhino are releasing 24-bit 176.4kHz stereo only DVD-Audio discs of three of the missing four Young albums which appeared on CD for the first time last year – ‘On the Beach’, ‘American Stars ‘n Bars’, and ‘Hawks and Doves’. The fourth, ‘Re*Act*or’, has been delayed as according to Robin Hurley, “…some changes were needed for the screen content.” It is currently scheduled for US release on the 5th of May according to the Rhino website. In the UK and Europe Warner Music have decided on a different tack, preferring to defer the release of the titles until all four are ready, with release dates set as 17th May for Europe and 31st May for the UK, as long as ‘Re*Act*or’ suffers no further delays.

Nearly three years ago his distaste for Compact Disc led Young to suggest that his fabled multi-volume Archive project would appear as 24-bit 192kHz DVD-Audio before doing so on CD. The suits will inevitably constrain that aim, but it is an indicator of Young’s belief in the fidelity of high resolution PCM that despite having completed many transfers at 24-bit 88.2kHz resolution for putative use as HDCD, on discovering the joys of DVD-Audio he resolved to re-transfer at either 192kHz or 176.4kHz sampling rates. The choice of the latter resolution on this DVD-Audio of ‘On the Beach’, as well as on the other three titles, was probably made to make the down-sampling to HDCD resolution easier.

Those transfers were done at Redwood Digital using the reference standard in analogue tape playback – an ATR machine using Aria electronics. Such a machine was used by Jody Klein to transfer the Rolling Stones tapes for their stereo SACD release, and indeed if he’s working in the UK Klein has been known to demand the presence of the only example currently in Europe – that belonging to Simon Heyworth at Super Audio Mastering, who among his many other recent masterings has used the ATR machine to transfer the superb (forthcoming) Nick Drake posthumous rarities and reconstructions CD ‘Made To Love Magic’, from John Wood’s Ѕ” master of his newly remixed versions, which is due out in the UK at the end of May.

So does all this care and attention to the analogue and digital elements of the preservation chain make its presence obvious in the resultant DVD-Audio disc? The answer is an emphatic yes. From the off it is apparent that there is a very good reason that Young has put his faith into DVD-Audio – done properly maximum possible stereo DVD-Audio resolution, or in this case near-maximum, just sounds incredible!

A few examples – the cymbals sound fantastically real throughout; the huge ride cymbal in ‘Walk On’, Levon Helm’s hi-hat on ‘See the Sky About to Rain’, coupled with his wonderfully tight fills; the height on the harmonica on the same track; The feel when Rick Danko’s bubbling bass blends with his Band-mate Helm’s kick drum and martial snare on ‘Revolution Blues’, but at the same time with a great space between the instrumentalists; the way that the vocal and the solo sit back behind the soundstage on the same track; the holographic foot stomping on ‘For the Turnstiles’, coupled with the most faithful banjo tone; the way the organ on ‘Vampire Blues’ inhabits a space in front of the left speaker while a hyper-real shaker emerges from the right; authentic sounding harmonicas throughout; the height on the second guitar solo for ‘On the Beach’ – the list of revelatory events in this recording could be endless.

Of course none of this would be of more than academic interest if the music wasn’t up to it, but all of this recording excellence is really just in service to the songs, and the songs here are an interesting mixture of relatively light fare such as the wistful resignation of ‘Walk On’ and ‘See the Sky About to Rain’, and no less than three ‘…Blues’ tracks (‘Revolution…’, ‘Vampire…’ and ‘Ambulance…’) with various degrees of disgust and bitterness with his new found fame and the world which spawned it conveyed lyrically, but Neil solos throughout with a lightness of touch that has not always been his way. Most interestingly the presentation of the recording shifts for the last three tracks which were all co-produced by the legendary 11 Grammy® award winning Al Schmitt. They all seem to be almost documentary recordings of Neil and his associates playing for real, and the recordings have a more integrated feel with a nicely claustrophobic atmosphere on the closing ‘Ambulance Blues’. Of course the centrepiece is the preceding track, ‘Motion Pictures (for Carrie)’, a meditation on the state of his relationship with Carrie Snodgrass. Here the stereo mix is at its least showy, as if to force your focus onto the song. Great Stuff.

Some effort has been made to give some added value to the disc, although there is nothing here that really qualifies as an extra per se. There is a plainly presented but very comprehensive discography, which could have done with a more useful navigation system than a beginning to end, screen-after-screen, plod through. Somehow the discography neglects to mention that ‘Road Rock Vol.1’ is available as a DVD-Audio disc, but remembers to do so for ‘Harvest’. The menus are all presented at 16:9, which is something of a rarity and lyrics are available as the songs play, as are photo galleries that employ a still image cross fade technique which I have not seen before. Maybe this is a capability of the current version of the MEI/Sonic authoring package that has upset certain Pioneer players, we already know that the company’s DV-563 will be unable to access the high-resolution content on this title until Pioneer release a firmware update. Although the disc plays flawlessly on my Toshiba SD900E (SD9200 in the US) and Lexicon RT-10, in a Denon DVD-A11 (DVD-5900 in the US) universal player I currently have on test the button highlights for the photos/lyrics/tracks options are not visible as the track plays, making extras navigation almost impossible.

Still, phenomenal results are obtained by listening to this high resolution stereo track using the Denon AVC-A1SRA (AVR5803 in the US) amplifier through the proprietary Denon Link digital connection – conversion outside the transport by multiple 24/192 Burr-Brown DACs means that there is an enhanced sense of realism, 3D imaging and even height compared to the Toshiba’s analogue output amplified through the Denon.

There is some marginal appeal to DVD-Video users in that all the functionality of the DVD-Audio segment is replicated, with the usual caveat that photos and lyrics become still and silent menu items rather than being available as the tracks play. One significant compensation for the lack of a surround track is the fact that the DVD-Video segment has a down-sampled version of the MLP stereo track, PCM at 24-bit 48kHz resolution, although why 24-bit 96kHz wasn’t used is puzzling. Still, at least iTunes will encode 24/48 PCM straight to AAC, meaning that if you go through all the rigmarole to extract the PCM from the video segment (which isn’t as easy as it might appear with this title) you can end up with AAC files of far greater fidelity than that obtained by ripping the CD for iPod personal use!

‘On the Beach’ ultimately demonstrates that all the research effort at Redwood Digital has been worthwhile – there is a stunning clarity and realism to the sound on this disc that far surpasses that on last year’s exemplary HDCD reissues. I feel for those of you who may have splashed out on those four CDs a mere six months ago, but if you have the playback equipment to get the best out of DVD-Audio, you should really prepare to take the CDs down to the nearest second-hand shop. I understand that the lack of a surround mix or any significant extras may deter some prospective purchasers, but my wager would be that a surround version may never appear – Young has plenty else to do, after all – and to miss this classic album in such flawless stereo would really be a mistake.