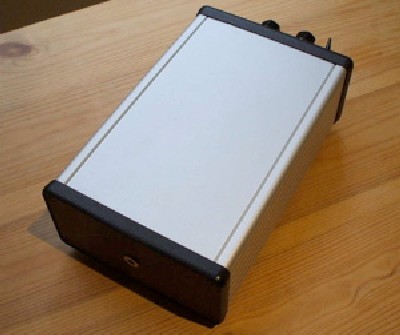 It took me a long time to catch on to the Sonic Impact phenomenon. It was not until November 2005 that I read an article which described the modifications that could turn this “giant killer” into a Giant Killer!

I initially ordered two of them, one from the U.K and one from the U.S, of course the U.S one arrived first! In anticipation of their arrival I made some adaptors to enable me to use my large bore Q.E.D cable and found a small jack plug to two phono sockets to enable me to connect my pre amp. In my parts box I had a 12v 1200ma adaptor.

The amp duly arrived and my first impression was the weight. It had no weight. Was the box empty? On taking the 5066 out of the box the second thing that struck me was the size of the amp. It was obvious that all photographs that I had seen had been enlarged or that my understanding of the size was grossly distorted.

The Sonic Impact amplifier measures 1.5” by 6” by 3.5” HxWxD. On the front there is a combined volume control and on/off switch on the front. If you have bananas for fingers you may find operation a little tricky. On the rear are two sets of spring clip terminals for the speaker connections. These will only take thin gauge wire and so some adaptors were made as mentioned previously. There is 3.5mm jack socket to take the signal feed from the Mp3 or C.D player and a 12v power socket for an external supply. The unit is has an undertray which takes eight AA batteries. However I did not try the unit with alkaline batteries. 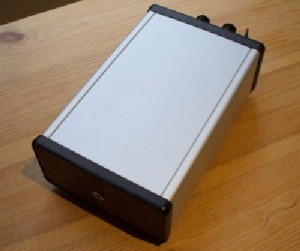 It took no time at all to get it connected up and then switch on time. The third thing I noticed was a pronounced “hiss” from the speakers. Having read that there was no discernible bass from the stock 5066 I left the subwoofer off to get a proper impression.

The first C.D into the drawer was “Two against Nature” -Steely Dan. The first track “Gaslighting Abbie” was a revelation. I was hearing detail that I had genuinely not heard before. Subtle nuances of what I perceived to be percussion instruments suddenly took my attention. I heard a “ting,ting” on the right channel, probably finger cymbals or similar that I had not heard before. The acoustic of the recording became real. What had been hiding in the mix had been brought out as if say a “gaslight” had been turned on.

On the Jennifer Warnes track “Somewhere Somebody” from her album The Hunter, Jennifer is very closely miked and her voice is very natural and unstrained. Backing vocals by Max Carl, take on a slightly delayed “shadowing” of Ms. Warnes vocals almost as if he is mimicking her and trying to get one step ahead of her. This was brought out superbly by the 5066. 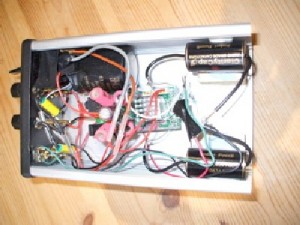 “Way Down Deep” from the same album is a testing track. There is a mellow drum beat that repeats throughout the track at around 100Hz. Forgive my ignorance, but this could be the “Talking drum and Conga”, played by legendary percussionist Paulinho Da Costa or “Surdo & Tar”, played by an equal legend, Lenny Castro. Wikipedia tells me that a Surdo is a large bass drum used in Brazilian music. I would say that the Sonic Impact controlled the bass very well, some could say it’s bass may be too dry. In this instance it was perfectly matched to the track as it avoided any boom or bloat, which can occur.

The 5066 had replaced my Audiolab 8000A, a 10 year old classic British battleship built amp, tonally neutral and made in 1995. Used latterly in Bi-amped configuration with a Cambridge power amp with similar gain running into the Mission 773e’s.

I spent many hours listening to the music listed above and much more. My overriding impression was that the sound it made was not Transistor in the same way as the Audiolab or previous Rotel, or NAD or other amps I had owned. Neither was it valve (tube, for you Yanks). I felt it had a sound of it’s own, very clear, detailed, but in my view not harsh or tiring. I liked it. In fact I like it so much I rang my audio buddy and said that he had to get hold of one and that I had not stopped grinning since I switched it on. A $29 amp sounds this good?! I will stop here because as I said earlier I came to this amp late in the day and all the superlatives have been said many times over.

I couldn’t say if it equalled or exceeded the sound of Single Ended Triode amps costing lots of money as I have never owned one or heard one in my system, but it seemed that for what it was, it had no right to sound as good as it did. It replaced an amp that cost £500 ($1,000USD) in 1995!

After using the stock 5066 for a week or so, curiosity got the better of me as to how much better this little thing could sound and so I set to and opened it up. There was a tiny circuit board, a chip the size of a small postage stamp, some SMD capacitors and resistors and some inductors and a few wires. That was it! I rummaged in my parts bin to see what I already had that I could press into service and save money! Parts I did not have I ordered from various sources. I was now ready to start. The advice given for removing the SMD’s was to heat them momentarily with a soldering iron and then “flick” them off the board. This turned out to be quite easy. The difficult part was finding the SMD’s once off the board. With the solder removed they are no bigger than a small grain of black pepper (under magnification).

With the removal process complete I went about installing the upgrades: Alps Blue Velvet 20k pot (50 – 100k recommended, but I had three of these I bought for £1 each !), Metal Film 0.6w resistors, Polypropylene input caps, Air Core inductors, 10,000uf stiffener cap on power rail, small heatsink on the chip and all re-boxed in Aluminium Hammond enclosure (see picture). The Alps pot has now been removed and the amplifier used a power amp. 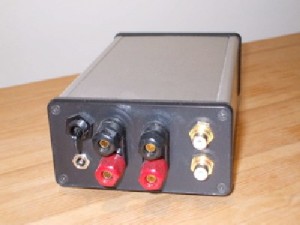 Now for the moment of truth, I switched-on the power, quite a thump, and still “hissy”. I placed the disc in the drawer, and pressed Play. Everything I had heard before was still there and now there was bass as well. The soundstage had grown in size, clarity had improved in that vocalists were now more prominent in the mix, but not strident or harsh. Cymbals shimmered. I use an Musical Fidelity X-Tone with a slight lift at 5khz, which gives cymbals more body and less sheen. The X-Tone is sadly no longer available.

“101 Eastbound” from the first Fourplay album is a track so well known to me after 16 years of owning the album, I feel that I could have written every note myself. Lee Ritenour’s clever phrasing and effortless style is beguiling. The Sonic Impact brought this so much more to life. Each inflection of each note was clear to hear. Nathan East’s bass playing is exemplary and again this brought out by the Sonic Impact.

In so far as the Bass response is concerned. The criticism of the un-modified Sonic Impact is that they “don’t do bass”. That was certainly my initial finding. However the modified 5066 certainly “does do bass”. It is quite dry, but articulate and extends as far as your speakers will allow. There is no bloom or boom unless it happens to be in the music.

Step back and take a look at the size of the Tripath Chip and wonder that it makes music at all!

“I.G.Y” from The Nightfly on vinyl is sublime. This track has a very catchy riff running all the way through it. The 5066 particularly liked vinyl and the slightly crazy nuances of Donald Fagen’s voice were clear to hear. Similarly, the title track “The Nightfly” created all the ambience that I am sure was intended when it was recorded, Larry Carlton’s superb musicianship making itself clear.

For an outlay of around £50 ($100USD) the result is ridiculous. Ridiculous in the “oh that is very very impressive” sense. I found myself grinning inanely at what I was hearing in very familiar discs. I also grinned at “how clever” I was to have created something so good for so little money.

Many of course got there before me, but I am so glad that I made the journey. TNT Audio said it equalled amps costing up to $10,000. I wouldn’t know. My history of Hi Fi owning has strictly been in the “budget” arena in the very strictest sense of the word. For example, the Audiolab is the most I have ever spent on one item. In my typical budget outlay I would spend around £200 -£300 per item.

Impact. In it’s stock form it astounds you. It sounds far better than it has any right to. In modified form it is exceptional. It was designed as a desktop amplifier for MP3 players etc, not a serious piece of Hi-Fi. So far as value for money is concerned there isn’t anything to touch it, is there?

Since making the Fostex Horns referred to earlier I can say that the combination of the modified Sonic Impact, Valve(Tube) Pre and Horns is a match made in heaven. The result is stunning. You hear and see right into the mix. It encourages you to keep increasing the volume. If you do, the band is right there in front of you. It is a very “live” sound. This is the best sound I have achieved in 40 years. I have a dedicated listening room, which is a “real world” U.K sized room 3m x 4m (yes small) (see picture).

So for me small is beautiful and perfectly formed, just like the 5066.