Patricia Barber’s Companion Album on SACD
The first three Hybrid Stereo SACDs issued by the new Mobile Fidelity label were from popular jazz singer Patricia Barber. All three have been praised for their sonics and performances.

In light of their success with the first three Barber SACDs, Mobile Fidelity has announced that it will be releasing a new Hybrid Stereo SACD edition of Barber’s album entitled Companion. Companion was recorded live in July 1999 at Chicago’s Green Mill. The original album on the Premonition/Blue Note label has 9 selections on it.

For the upcoming SACD edition, Mobile Fidelity has gone back to the original live session master tapes and is planning to issue an SACD with all 9 selections plus «several bonus tracks» to be selected in consultation with the artist. The SACD will also feature new album liner notes by well known audio writer Michael Fremer.

According to Mobile Fidelity, the tracks they’ve heard from these sessions so far are «gems» and they are looking forward to the release of this upcoming SACD. Current plans are for the Companion SACD to be available on October 21st. The SACD catalog number will be UDSACD 2023.

A Second Surround SACD Planned
At the recent Home Entertainment 2003 (HE 2003) show in San Francisco, Mobile Fidelity provided a sneak preview of their first Surround Sound SACD release. During the preview, they mentioned that the label had acquired rights to additional titles in the Vox Classical Series of 1970′s 4 Channel recordings.

Capitalizing on those rights, Mobile Fidelity has announced that the next album in their new Surround SACD series will be Prokofiev’s Ivan the Terrible performed by Leonard Slatkin and the St. Louis Symphony. Prior to this upcoming Hybrid Multichannel SACD release, the Slatkin performance of Ivan the Terrible was only available as part of a larger, multi-disc collection.

According to Mobile Fidelity

Mobile Fidelity plans to release the Surround Sound SACD of Ivan the Terrible on October 7th. The catalog number of this SACD will be UDSACD 4003.

First Surround SACD Delayed
Speaking of Mobile Fidelity’s Surround SACD series, I should mention that their initial Surround SACD of Ravel’s Bolero and Assorted Orchestral Works has been delayed. The release date of this Hybrid Multichannel SACD has been moved back from August 26th to September 23rd. From what I heard of the Surround Master Tapes for this SACD, the wait should be worth it.
Prokofiev’s Ivan the Terrible by Leonard Slatkin and the St. Louis Symphony (Mobile Fidelity UDSACD 4003) 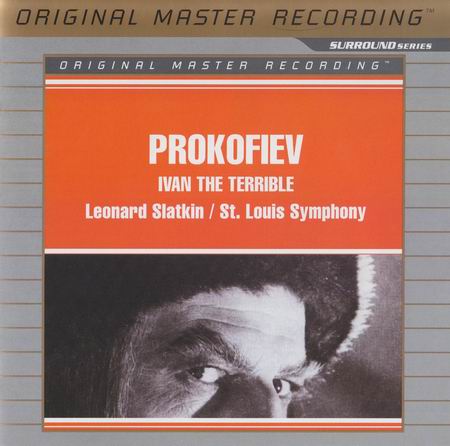